Looking back at ‘displays of humanity’ in Hudson, OH

In the face of this unprecedented worldwide coronavirus pandemic, I am reminded of two periods in history when the Hudson community united and overcame similar challenges.

Hudson in World War I

Just over 100 years ago, on the morning of November 11, 1918, as Hudson was receiving news of the end of World War I with the signing of the Armistice, the world was fighting another global crisis: the influenza pandemic or “Spanish flu.” And while the Hudson community would come together to celebrate the end of the war with a great gathering on the Village Green and a parade up Oviatt Street that ended with a ceremony at Western Reserve Academy’s Chapel, the influenza epidemic had dramatically altered life in Hudson and across the country. 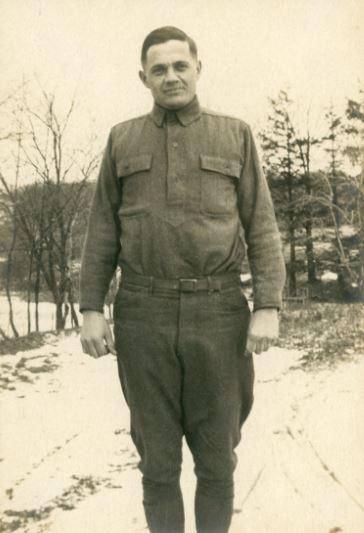 David Hudson Lee (1893-1919), Hudson WWI veteran, and the only Hudson casualty of WWI.It is estimated that 50 million people worldwide, about 3% of the world population, died as this disease spread with ruthless efficiency. About 45,000 American soldiers were killed by the influenza virus and not by a mortal enemy in combat (53,402). In the United States alone, over a quarter of the population would become infected and about 675,000 would die because of the disease.

The Akron Beacon Journal would report 3,114 deaths in Ohio alone during the months of October, November, and December 1918. The influenza epidemic sweeping across America was described as “the deadliest scourge that ever had invaded the United States.”

The flu was rapidly spreading through the Hudson community with public events postponed or canceled and schools closing and reopening on a weekly basis for months, to control the spread of the flu. On Oct. 10, 1918, a month before the signing of the Armistice, one of Hudson’s physicians, Dr. J. Edgar Allport, delivered a speech at Western Reserve Academy for students and faculty, called “The Flu, and How to Avoid It.”

Accounts in the local newspaper reported that Dr. Allport made house visits to as many as 40 people a day who had the flu.

Hudson physician and WWI veteran Dr. George A. Miller (1875-1935), a graduate of WRA (1897), was among thousands of doctors and nurses who were the first ones to be sent home from Europe after the signing of the Armistice, to help their communities battle the influenza epidemic.

Martha C. Clark (1879-1946), a Hudson schoolteacher, was the only Hudson woman to serve in the Great War, and at the age of 38, joined the Red Cross as a nurse. Clark was sent to Camp Upton in Yaphank, N.Y., on eastern Long Island, where she cared for New York State soldiers who were stricken with influenza. She also served overseas for about six months as a Red Cross nurse.

David Hudson Lee (1893-1919), a fifth-generation descendant of Hudson founder David Hudson, was one of 81 WWI veterans from Hudson. He contracted influenza in the winter of 1918 while serving with the American Expeditionary Force. While he survived the virus, it left him weakened and susceptible to other illnesses. On June 6, 1919, at the age of 26, Lee passed away in Koblenz, Germany, from lobar pneumonia, the only casualty from Hudson in the First World War.

Read the entire article on the thesuburbanite.com web site here: