America's deadliest month? Not April, but a deadly combination of war and pandemic

This is a time for taking stock amid the COVID-19 outbreak. President Trump and his top advisers, public health experts, governors, business leaders, and everyday people are all asking the same questions: Is the outbreak finally starting to wane? If it is, will there be a second wave? And if that happens, could it be worse than the first round?

Times may change, but history is once again repeating itself. Just over 100 years ago, folks were asking similar questions as they endured a different, but savage, illness. It helped make October 1918 the deadliest month in our history.

More U.S. citizens died then than ever passed away during any 30-day stretch before or since. Blame it on the one-two punch of a hideous pandemic and an equally horrific world war. 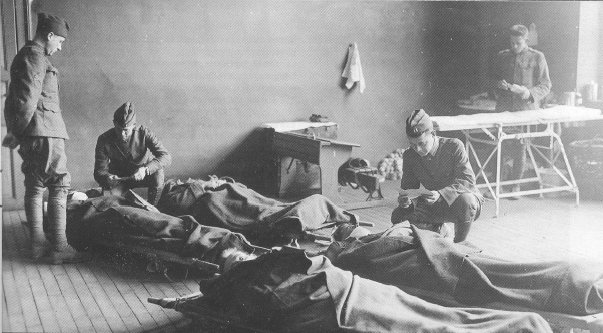 First Lieutenant W.F. Faris (kneeling, left) and Captain R.N. Brookmeyer (kneeling, right) diagnose newly arrived flu patients at Base Hospital Number 29, 5th Division, in Hollerich, Luxembourg, 7 December 1918. (National Archives)While World War I had officially begun in summer 1914, the United States didn’t enter the conflict until April 1917. The nation wasn’t prepared for combat, and it took a long time to equip and train it and transport it across the Atlantic. But by summer 1918, the doughboys (as American soldiers were nicknamed) were finally in the thick of the action.

That September, the Allied Forces (the British, French, and Americans) launched a major counter-offensive against the Germans. A host of new names such as the Meuse River, Argonne Forest, and the Hindenburg Line joined the roster of earlier bloody battles such as Belleau Wood and Chateau Thierry. People in the U.S. pored over maps of Europe, locating these unfamiliar places as the casualty counts poured in. By month’s end, General John “Black Jack” Pershing reported a total of 19,552 U.S. servicemen killed in action and dead from illness and injuries. (That figure would jump to 38,819 the next month.)

At the same time, the Spanish Flu pandemic was raging unchecked back home.

It had popped up mysteriously on an army training base in Kansas that winter. One soldier woke up feeling ill. By lunchtime, 106 others were sick. The ailment was so intense and spread so fast, doctors had never seen anything like it. Strangest of all, unlike typical infections that target the very young and the very old, this one brought down healthy people from late teens to the early 40s. With the nation mobilizing for war, the flu went with the troops, then spread through civilian ranks from city to city and bringing death and incredible suffering along with it.

Things seemed to turn a corner as spring gave way to summer and the weather grew warmer. That, many people thought, was that.

Except it wasn’t. The Spanish Flu returned with a vengeance that fall, stronger and more deadly than before. By October, it was again silently rampaging across the U.S. Major cities went into quarantine. People wore gauze face masks. Schools were dismissed, mail service stopped, churches and theaters were closed.