Survivors of the USS President Lincoln in lifeboats before being picked up the two destroyers USS Warrington and USS Smith on June 2, 1918. Fifteen year-old Samuel Hart was among the crew members of the President Lincoln who survived the ill-fated voyage.

Eyewitness: the Sinking of the U.S.S. President Lincoln

Editor's Introduction: Despite being one of the most effective weapons of World War I, the German submarine did surprisingly little damage to all the troop transports carrying American soldiers to fight in France. One of the few exceptions was the troopship, U.S.S. President Lincoln, which was torpedoed and sunk on her sixth trip across the Atlantic on May 31, 1918 with the loss of 26 lives. The following reminiscence is from a member of her crew, Mr. Samuel Hart of Atlanta, Georgia, who has a vivid memory of this unusual event in World War I history. 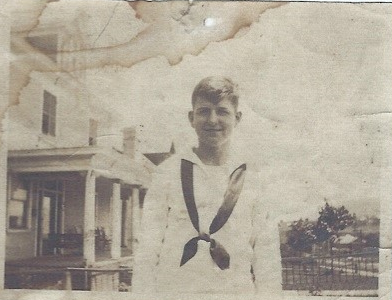 Samuel Hart in his U.S. Navy uniform at age 14.I was born in Henderson, North Carolina on August 27, 1902. I was living in Washington, D.C. when the President and Congress declared war on Germany on April 6, 1917. Although I was only 14 years old at the time I borrowed a pair of long pants from a friend of mine and proceeded to the Navy recruiting station and told them I was 16. I was sworn in on April 10th and sent to Newport, R.I. for training.

From there I went to the U.S.S. President Lincoln and took part in remodeling it from a former passenger ship to a troop ship. Most of the crew came from the U.S.S. Granite State, a Naval Reserve ship stationed on the Hudson River. After a shakedown cruise we were ready to take on troops.

On the morning of May 31st, 1918, I was on the 6-8 watch in the forward crow’s nest. The four ships in our convoy were going abreast at the rate of speed of the slowest vessel (about 12 knots per hour). The Lincoln was the third ship to the left. The morning was clear and fairly warm.

Our escort destroyer had left us during the night as we were about five hundred miles from France and subs did not usually operate that far out due to their short range of fuel and other supplies.

I was relieved at eight and went directly to the mess hall for breakfast. After breakfast I went to my quarters to stow my gear. I heard and felt an explosion. I first thought maybe one of the gun crews was having target practice. Then there were two more explosions and the battle alarm was sounded.

I rushed to my bunk, picked up a life vest, and went to my battle station. It was then and only then that I realized we were sinking. You could look down the cargo batch and see the water rising. Whitey Cramer, the senior NCO, passed the word along after it came down from the bridge, “All hands, abandon ship".

First we started throwing life rafts overboard.When moving them under normal circumstances it took four to six men to move them. Now two men were pushing them overboard. Contrary to what the movies show about the sinking of a ship, only the crew of a life boat are on board when it is being lowered. Once in the water they unhook and push away from the sinking ship. Then they start to pick up those who are either in the water or on a raft. 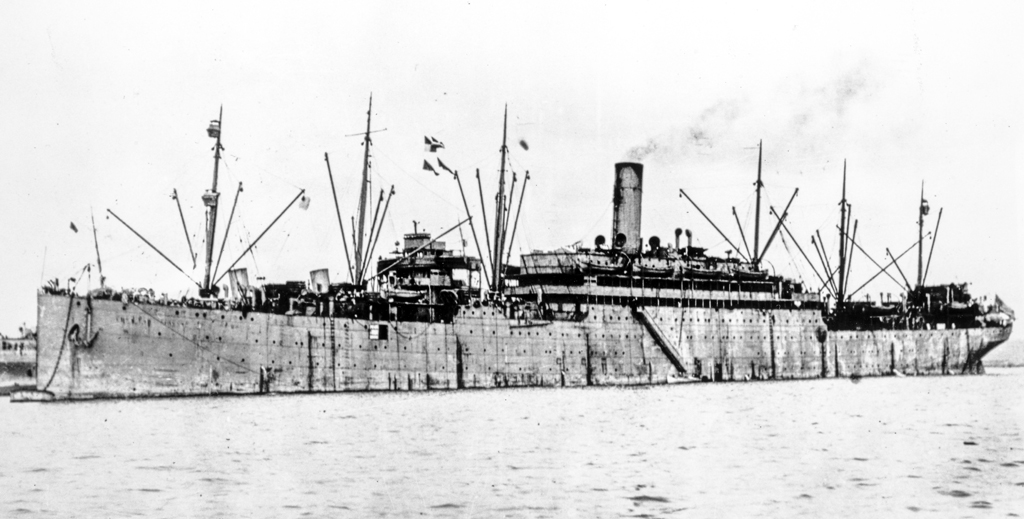 The USS President Lincoln in harbor days before her sinking by the U-90 on May 31, 1918.When I went overboard the first! thing I did was to unlace and get rid of my shoes. They were Army hob-nail shoes and very heavy. I then swam to a raft and got aboard. Shortly after a lifeboat picked me up. I then manned an oar and we gathered up all the survivors that the boat could hold. Unfortunately two of our lifeboats were destroyed in the explosions so we did not have room for all and some had to stay on the rafts. During the day this was not so bad but at night it was cold even in the lifeboats. None of us was completely dry.

All officers were told to get rid of their cap end blouse so that they could not be recognized. Lt. Edouard Izac was in command of our lifeboat but the choppy sea made him ill and he was stretched out with his arm on the gunwale of the lifeboat with his gold stripe showing. We saw the U-boat (U-90) approaching and its captain looked down, pointed to Lt. Izac, and said, "Come aboard, sir." Shipmate Howard Spooner and and I were to hold on to the sub with boat irons. There was what appeared to be a three-inch gun forward and a smaller one aft. There was a sailor armed with a rifle. Spooner and I both decided if they were going to start shooting we were going to abandon the lifeboat. I don't know what good it would have done but at least we were going to give it a try.

When the sub first appeared it looked like a rescue vessel coming to pick us up but this was merely the conning tower and as it appeared we knew it to be the sub. The only thing they did this time was to disarm our lieutenant of his sidearm and sail away.

We moved around in a large circle and picked up any stray rafts with men on board. Then we tied our boat to the one ahead and the one in the rear tied on to us, etc. In this fashion we were all drifting together. At night the the first boat was to fire a flare and when that burned out the next one did the same and so on until we ran out of flares.

About three o'clock in the afternoon of the same day the sub {U-90) came by once more. The Sub said that they wanted the senior officer and if we would point him out they would let the rest of us go. Lt. Izac told them that the captain had gone down with the ship. This, of course, was not true. The lieutenant was taken prisoner and while aboard had the run of the sub. He located the sub's base on their maps and felt that if he could give this information to our Navy if would end sub warfare. He made two attempts to escape after he reached Germany and was successful on the second try. He traveled by night until he reached the Rhine River which he swam to reach Switzerland. From there he was sent back to London. The information that he gave was very important but before it could be used Germany surrendered. Lt. Izac by risking his life.to get his information back was given the Congressional Medal of Honor. 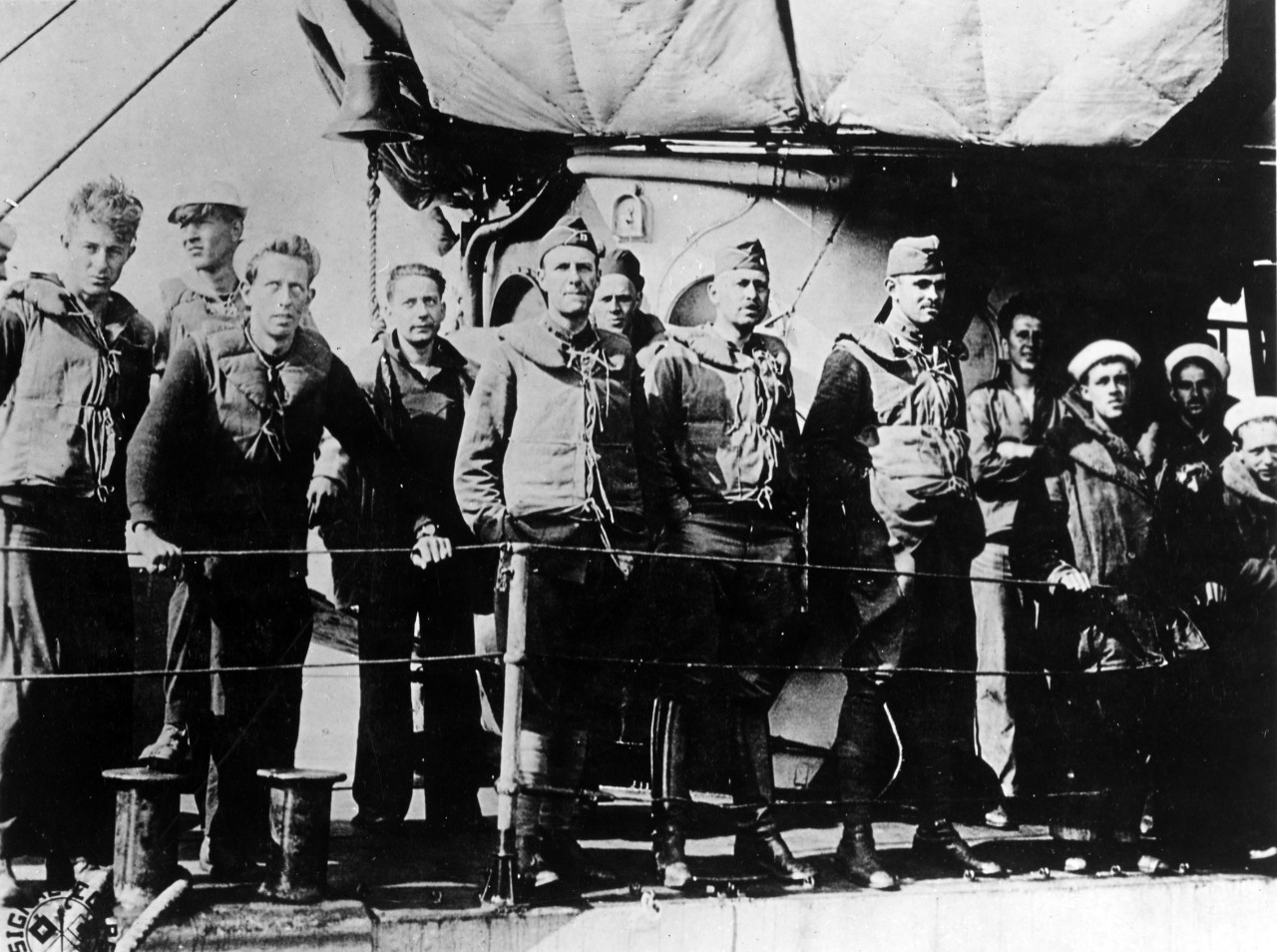 Some of the survivors of the sunken USS President Lincoln aboard USS Warrington (Destroyer # 30) soon after they were rescued on June 2, 1918. These men are still wearing life preservers. The three in the front center are U.S. Army officers.(Not known if Samuel Hart is among those in this photo.) President Lincoln was torpedoed and sunk by the German submarine U-90. Note Warrington's bell in the upper left center. U.S. Army Signal Corps Photograph, via the United States Navy's Naval History and Heritage Command. During the day two destroyers, the Warrington and Smith, had done their tour of duty and were headed back to Brest to re-supply as one was short of oil and both were low on food. They requested permission to head for us and arrived on the second of June at about two or three AM.

The waters were choppy and we had to stay by the side and as the waves pushed the lifeboat up two sets of hands leaned over and pulled us aboard. Should they miss they would have to wait until the boat dropped and then started back up. It was a tricky business for if you fell you could be crushed by the lifeboat and the destroyer. The crew did a magnificent job and not one man was injured.

I went aboard the Warrington and the crew treated us like heroes. We ate up all their remaining food, even robbing the life rafts for emergency rations. Toward mid-morning we were met by another destroyer that came out to refuel the Warrington. Without refueling we would.never have made it to port.

While the Warrington was busy refueling, the Smith spotted a sub which they thought was the one which sank us and gave chase. The sub dived and while the Smith gave out several rounds of depth charges, they saw no oil slick so they knew the sub had eluded them. Years later we learned that this was indeed the same U-boat.

After we refueled we set sail for Brest. The very first ship that we saw was I the U.S.S. President Grant which looked like a ghost ship to the Lincoln for it was impossible to tell the two ships apart. We were put aboard the Great Northern, a former merchant ship from the West coast. They had been sworn in intact and had no use for the lowly swabs that came aboard. They treated us very badly and we were happy to get off in New York and go to Bensonhurst, New Jersey. There I got my first pair of shoes since I kicked off the pair that I had on when I went overboard. 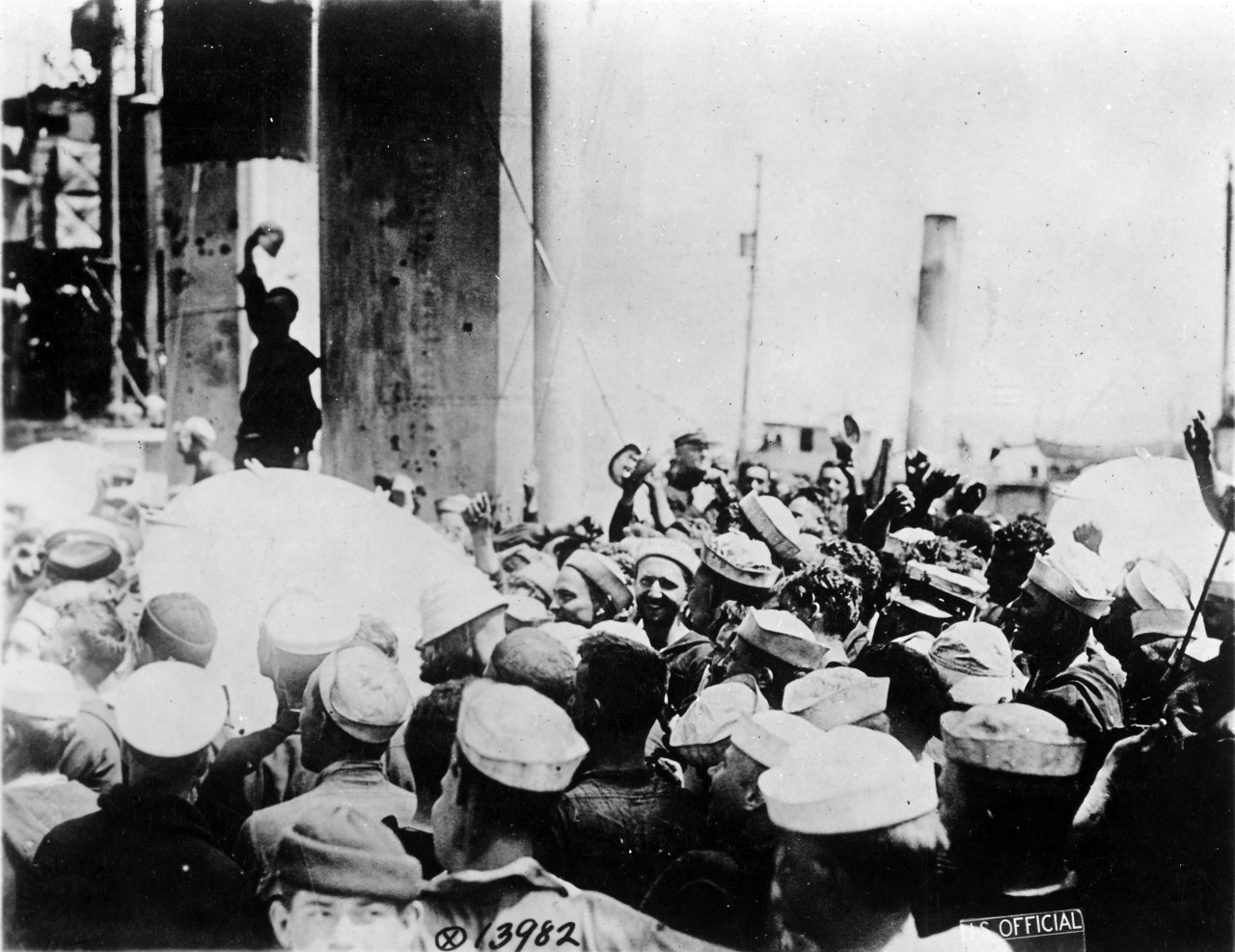 Some of the survivors of the sunken USS President Lincoln going on board USS Great Northern at Brest, France, in June 1918 to return home to the United States. According to the recollection of Samuel Hart, the Great Northern's crew did not welcome the survivors with any great warmth. The President Lincoln was torpedoed and sunk by the German submarine U-90. U.S. Army Signal Corps Photograph, via the U.S Navy's Naval History and Heritage Command.