The opportunity to honor the men and women that have served in the armed forces is extremely important to us all. This year, unfortunately, there were no parades, no local high school bands playing patriotic music, no speakers' remarks honoring the service and sacrifice of our communities' Veterans, and no Veteran's organization programs. The playing of taps and the Honor Guards' 21-gun salute did not echo through the air everywhere. 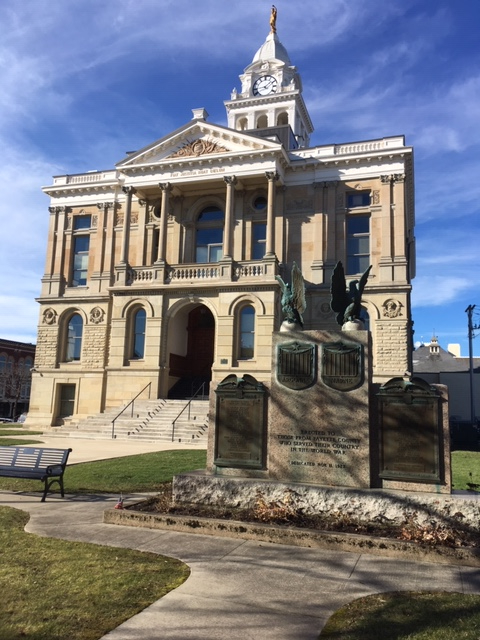 The Fayette County, Ohio World War I Memorial.But, hopefully we all took time to think about and thank our communities' Veterans, whom have given so much for us.

The current pandemic we are living in provides us a window into an earlier time 102 years ago. On Memorial Day of 1918 the United States was in the midst of the Spanish Influenza Pandemic. The United States was also in the second year as a participant in World War I. The largest and deadliest World War I battles for US troops were ahead.

We associate World War I with poison gas, trench warfare, and machine gun fire, yet the deadliest killer of US troops was disease. According to official army records: 50, 280 United States soldiers were killed in combat; 57,460 US soldiers died of disease.

Fayette County is less than thirty miles from Camp Sherman, just outside Chillicothe. Camp Sherman was a sprawling World War I military encampment, covering nearly 10,000 acres with 2,000 buildings. More than 123,000 officers and enlisted men transitioned through Camp Sherman in 1917 & 1918, making it the third largest World War I encampment in the US. Camp Sherman also holds the dubious distinction of having the highest influenza death rate at any military installation. 7,618 soldiers were admitted to the Camp Sherman hospitals, leading to 842 total deaths.125 soldiers died on October 8,1918 at Camp Sherman on the single deadliest day.

Unfortunately, many local soldiers’ enlistments took them to Camp Sherman. An analysis of Fayette County World War I deaths in service mirrors the earlier army and navy statistics. Nineteen of Fayette County's forty-eight World War I deaths in service were from the effects of the influenza pandemic. The actual cause of death was listed as pneumonia; but their pneumonia was caused by influenza.

Clarence Maxwell, from Jefferson Township, has a story typical of influenza deaths at Camp Sherman. The October 7, 1918 Washington Herald writes: "... Private Maxwell had only been in Camp {Sherman} a few weeks, and was ill only a few days ..." Fayette County's World War I influenza casualties were not just limited to Camp Sherman. Fred Hillery from Washington Court House died in the hospital at the Great Lakes Naval Training Station in Illinois. John Burke lost his battle with pneumonia at the Fort Thomas Barracks in Kentucky. Ray Dixon from New Holland lost the battle with influenza in France.

Below are the World War I Influenza service members deaths from Fayette County:

Each of these soldiers, sailors, and marines made the ultimate sacrifice while serving their country, no different than had they been killed on the battlefield. 2020 is a unique Memorial Day. Let's not forget to thank the men and women past and present whom have served our country.