By Rebekah Riess and Hollie Silverman
via the cnn.com (television network) web site 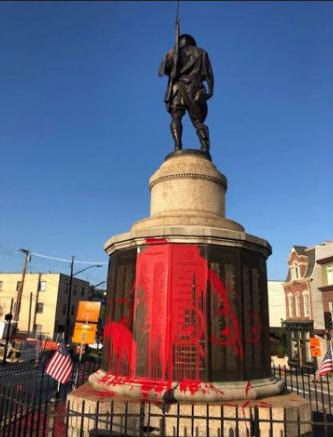 Pittsburgh Police are investigating after a WWI War Memorial at Doughboy Square in Lawrenceville was vandalized overnight, according to a release from the Pittsburgh Bureau of Police.Police in Pennsylvania are investigating after a World War I memorial was vandalized on Memorial Day, according to a news release from the Pittsburgh Bureau of Police.

The vandalism was discovered at 8 a.m. on Monday on the monument in Doughboy Square in the Lawrenceville neighborhood, the release said.

Red paint was splashed on the memorial and "indeterminate messages" were written in the paint, police said.

"Vandalizing a memorial on any day is wrong, but it is incomprehensible to vandalize this memorial on a day in which we honor those who served and gave their lives for the freedoms we enjoy today. Pittsburgh Police will vigorously investigate this crime," Pittsburgh Public Safety Director Wendell Hissrich said in a statement.

Investigators are reviewing video footage of the area, police said.
Residents told CNN affiliate WTAE they were disappointed that the vandalism occurred on a day meant to honor those who gave their all.

"I almost feel like crying," Navy veteran Lawrence Cmar told the affiliate. "As a veteran, this is the worst thing you could do on the worst possible day of all days."

Holly Hicks-Opperman, whose father served in World War I, said seeing that memorial targeted was upsetting.

"This has been the hallmark, the centerpiece of Lawrenceville, for every veteran who has ever fought in every war for this country for our freedom. Awful," Hicks-Opperman told WTAE.

The memorial, which turns 99 in five days according to the Lawrenceville Historical Society, was being cleaned Monday afternoon, WTAE reported.

Read the entire article on the CNN web site.