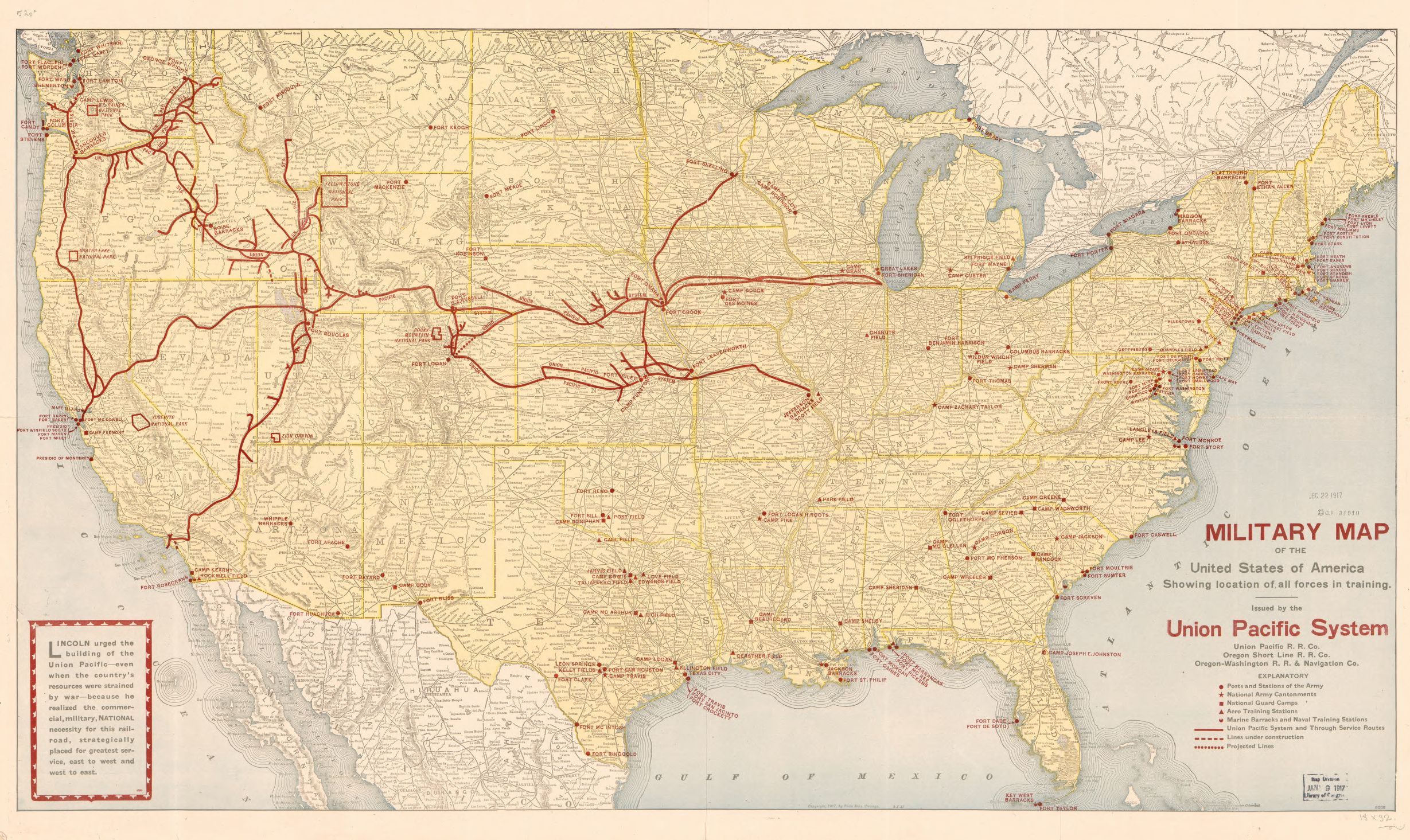 Poole Brothers, Military map of the United States of America: showing location of all forces in training, 1917. Since the influenza virus broke out in military camps before spreading into civilian communities and cities, Army records offer important data points in studying the virus. Click map to enlarge. (Geography and Maps Division, Library of Congress)

The Pandemic to End All Pandemics?: WWI, the 1918 Influenza Epidemic, and Urban America

via The Metropole Blog web site of the Urban History Association

In a recent fivethirtyeight podcast, political scientist Dan Chen noted that in China the population largely distrusts local authorities’ response to the COVID19 pandemic, while placing faith in the large central government. Host Galen Druke then noted that in the United States, at least over the past few months, the reverse is true: support for local governments’ COVID responses is quite high while many judge the federal government’s response dimly.

One hundred years ago, the federal government largely abdicated its responsibility and placed much of the burden of fighting the influenza pandemic—which took 675,000 lives between January 1918 and April of 1919—on states and municipalities. Some of today’s governors and mayors have thus far demonstrated competence and leadership, and others have not. The same was true in 1918, and the list of the dead demonstrates that a nation on wartime footing battles pandemics very poorly, particularly at the federal level. The total war of “the war to end all wars” differed greatly from the conflicts we fight today with an all volunteer army; during the former all policies and institutions focused on its prosecution at the expense of everything else and measures established to facilitate mobilization and troop shipment overseas greatly exacerbated influenza’s spread. If not for the efforts of the American Red Cross along with Progressive-era volunteer social welfare organizations, the death toll would have been even worse.

The War and The Federal Government

Urban America was largely left to fend for itself in 1918. The federal government focused intensely on fighting in World War I and willfully ignored the pandemic. With a handful of exceptions, like Army Surgeon General William C. Gorgas, who sounded numerous alarms regarding the pandemic’s spread, officials purposely downplayed and ignored the illness.[1]

Cowed by the Espionage Act of 1917, the Sedition Act of 1918, and the overheated nationalism of the war, newspapers self-censored and avoided reporting on the illness, lest it reflect poorly on the mobilization of U.S. armed forces. Though as historian Alex J. Navarro pointed out in a recent interview, to say newspapers ignored the pandemic would be misleading: “Newspapers featured daily articles on the epidemic, often with front-page and above-the-fold coverage.” When they did address health, newspapers frequently offered little more than popular bromides: “Remember the three C’s, clean mouth, clean skin, and clean clothes … Keep the bowels open. Food will win the war … Help by choosing and chewing your food well.”[2] According to Navarro this was not intentional, but rather “a result of the knowledge gap that existed about influenza at the time.” Public officials frequently downplayed the virus unaware of its novel origins.

The agency also failed to designate influenza a reportable disease, which partially explains why so few records from the pandemic exist. General chaos brought on by the flu pandemic also hampered record keeping. Only large cities and 24 states maintained statistics adequate enough for federal databases, and even in those places officially documenting the event “held low priority,” writes historian John M. Barry.