Andrew Capets’ initial interest in World War I was finding out more about his grandfather’s unit, the 313th Machine Gun Battalion.

That research led the North Huntingdon resident and amateur historian to write “Good War, Great Men,” which focused on his grandfather’s battalion and its exploits, including fighting in the Meuse-Argonne Offensive, in which more than 26,000 American soldiers died. 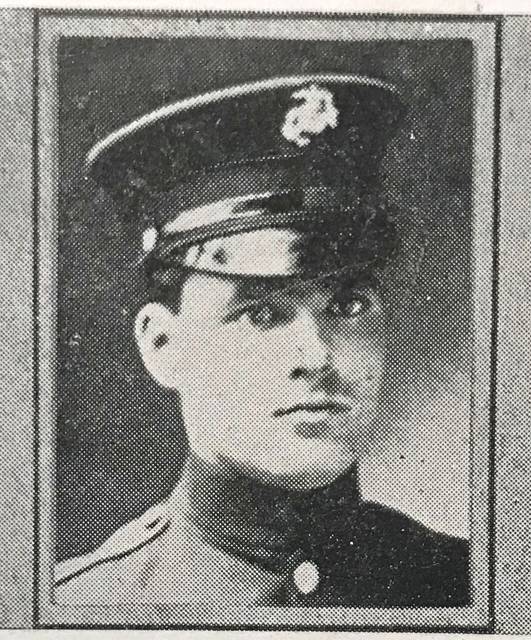 Marine David Colvin of Greensburg was killed in action in Marne, France during World War I.Now, Capets has joined with a Nebraska man on a new WWI project: creating a searchable database of soldiers’ burial cards, some of which will be linked to a digital map showing where those soldiers are buried.

“We were both part of a World War I group on Facebook,” Capets said. “If one of us is looking for some information, we’ll talk with other members.”

Capets connected with Weldon Hoppe of Colon, Neb., who had recently returned from France, where he researched two men from his hometown who died in the Meuse-Argonne Offensive.

Both men had made frustrating, incomplete discoveries in the National Archives. Capets found a database of burial cards for WWI soldiers, but they were simply scanned, rather than fully digitized.

“You couldn’t search them for, say, a specific name,” Capets said.

Around the same time, Hoppe came across four books showing burial plots for WWI soldiers, “but they weren’t in any specific order, either,” he said. “But they had coordinates on them. I work for an engineering firm that does a lot of mapping, so I transcribed the coordinate information and put it on a GIS map so you can visually see where they all are.”

Hoppe reached out to Capets through the Facebook group, and their undertakings have been mutually beneficial.

“We thought there had to be a better way (to find specific information),” Capets said. “Weldon came across the Zooniverse website and pitched this idea to them.”

One of the deciding factors was the backing of a few organizations such as Fold3, which is owned by Ancestry.com and creates a sort of military family tree that veterans and others can search.

While Capets and a group of volunteers are building a fully searchable database using the burial cards, Hoppe is attaching that information to interactive maps of burial plots.

Read the entire article on the Tribune-Review web site here: