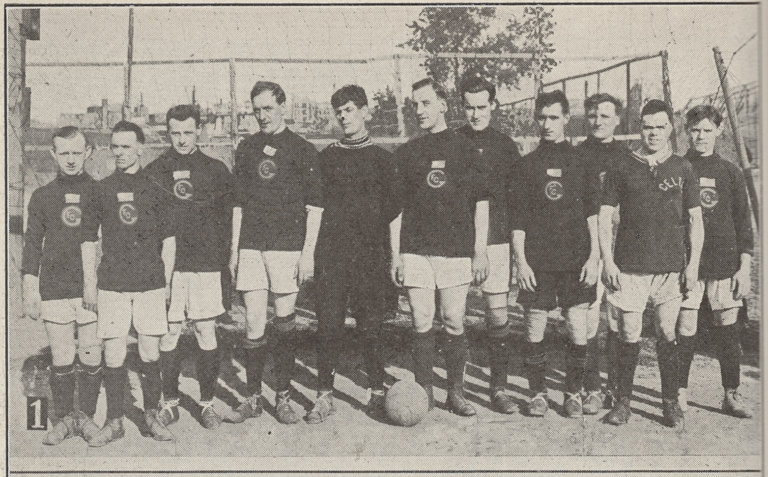 Reading your own obituary: Samuel Bustard, the 1918 Spanish Flu pandemic, and the evolution of New York Metro Area soccer through World War I

“Bareheaded and with bleeding knees exposed to the winter’s chill” was the New York Herald’s description of the 1918 New York Footballers’ Protective Association (NYFPA) international series clash between Ireland and the team representing Continental Europe[1]. Entertaining New York area soccer fans since 1912, the NYFPA contests featured the top local players representing unofficial national teams of their country of origin. Ireland, the 1917 winner of the international series, defeated the stubborn Continental team at Manhattan’s Lenox Oval by 7 goals to 2. Samuel Bustard, center halfback and captain of the Ireland team, played a stellar game in the February freeze and scored two of the Ireland goals. No one at the time knew it would be Bustard’s last game before he would be reported dead from the Spanish Flu on October 14, 1918.

This article introduces Samuel Bustard, an Irish immigrant from Belfast, and details his journey through American soccer in the first quarter of the twentieth century. Although not a household name, Bustard played for several elite teams and experienced firsthand many of the major trends and events that transformed soccer in the New York Metro area during the 1910’s and 1920’s. These trends and events are addressed in detail and viewed through the filter of Bustard’s life and career. Bustard’s unique story also includes an encounter with the deadly second wave of the Spanish flu pandemic in October 1918. That encounter left Bustard’s family searching for answers and resulted in Bustard being “one of the few men who have been able to read his own obituary notice.”[2]

Bustard’s story starts in October 1912, when the Paterson True Blues were starting what would be a memorable season, culminating in the capture of the coveted American Football Association (AFA) Cup and a narrow second-place finish to West Hudson AA in the National Association Football League (NAFL). The True Blues’ first opponent in the AFA Cup competition was a plucky amateur eleven from Paterson named the Olympics. The Olympics were known as a strong amateur side, but the presence in Paterson of the professional True Blues, Rangers, and Wilberforce clubs ensured the Olympics received little press. Looking to strengthen their side before the upcoming match, the Olympics signed several new players including a diminutive 20-year-old Irishman living in Passaic, NJ, named Samuel Bustard, who was referred to by the Paterson papers as having played “on a fast team in Belfast.”[3] Nonetheless, the teams entered the weekend with the Blues as heavy 5 to 1 favorites to capture the cup tie.

“Taken by surprise and nearly played off their feet,” the True Blues managed to squeeze past the Olympics 2-1 on a late penalty kick by former Clark AA star Charlie Fisher.[4] The Olympics, however, protested against the similarity of uniforms worn by the True Blues, and won a replay that was held the following weekend at Paterson’s Willard Park.[5] Angry over the protest and now aware of the Olympics’ undeniable quality, the True Blues decisively won the replay 4-0. Samuel Bustard made ignominious history by scoring a somewhat comical own goal in the second half that secured the Blues’ victory.[6]

Read the entire article on the SASH web site here: