United in the Great Cause: Allied and American military relations during the First World War

By Tyler Bamford
via the Army History Magazine web site

On 28 May 1917, less than two months after the United States entered World War I on the side of the Allies, 191 U.S. Army officers and men led by Maj. Gen. John J. Pershing boarded the British ocean liner RMSBaltic and sailed for Europe.1 President Woodrow Wilson had dispatched this group as the nucleus of the American Expeditionary Forces (AEF), an army that eventually comprised over one million American soldiers in Europe. Faced with the task of building and leading the largest field army yet in American history, these handpicked officers did not pass their voyage in leisure. Also traveling on the Baltic were a number of high-ranking British Army officers with extensive experience fighting in France. Taking advantage of this opportunity, Pershing and his staff spent countless hours with their British hosts, absorbing as many of their lessons as possible. Pershing later wrote that these British colleagues “kindly consented to answer questions on the subjects of organization, training, and fighting. 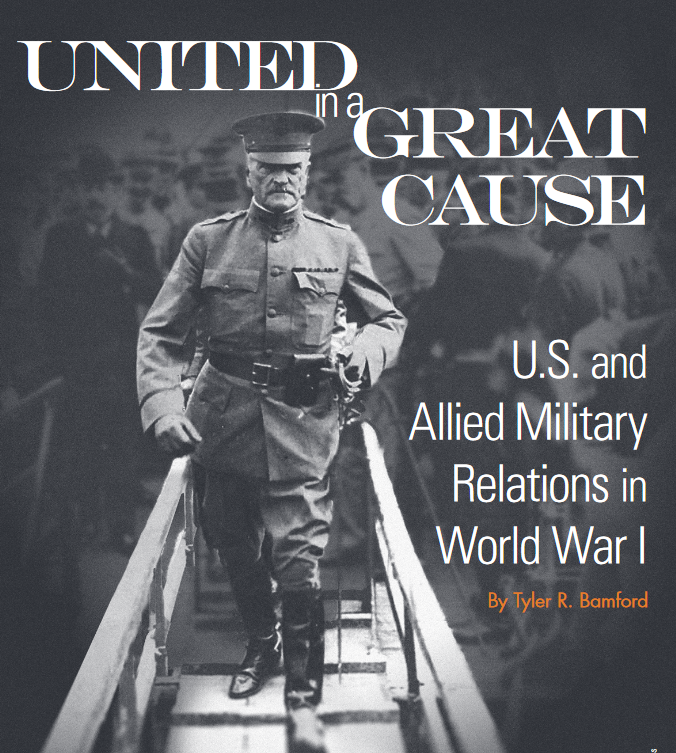 The conferences thus held and a study of confidential reports from the British and French helped to put us more closely in touch with many details which could not have been learned otherwise except through experience.”2

Pershing understood he faced an enormous task for which the U.S. Army possessed little institutional experience. Naturally, he and his subordinates wanted to hear the lessons that the British had learned at an enormous cost in three years of fighting. More than just technical instruction, however, these discussions revealed the culture, customs, and attitudes of the British Army to the American officers.For many in Pershing’s entourage, this was their first introduction to the British Army, and the officers impressed them favorably. American Lt. Col. (later Maj. Gen.) James G. Harbord found lectures by British Lt. Col. Frederick K. Puckle particularly instructive. A former supply officer in France, Puckle spoke on logistics organizations and the British Army. Harbord also recorded Puckle’s characterization of the typical British officer. “He is never demonstrative,” Puckle cautioned, “He does not show his feelings. He does not wear his heart on his sleeve.” Puckle said the American officers “must not misunderstand his attitude for hostility, for it is not.”3 Puckle and many of the officers on both sides realized that with increasing contact between the two armies, social and cultural differences had just as much potential to sour the partnership as disagreements over policies.

For nearly all active U.S. Army personnel, World War I marked the first time they came into contact with their British counterparts. It was also the first time the U.S. Army had ever deployed to Europe. Only once in the two armies’ histories, during the brief Boxer Rebellion of 1900–1901, had they fought side by side. Yet between April 1917 and November 1918, hundreds of thousands of American officers and men would train and fight with their British comrades. American and British officers’ encounters with each other during the twenty months their countries functioned as associate powers created predominantly positive impressions that shaped their personal views and professional judgments, and set the tone for the two armies’ interactions in the interwar period. Many officers in both armies published their experiences and opinions in postwar memoirs, which circulated among fellow officers for years after the authors’ retirement. In this way, these contacts became embedded in the armies’ institutional memories. Often, these memoirs downplayed disagreements, thereby presenting an even stronger image of wartime camaraderie. Yet in contrast to officers’ positive interactions, their soldiers’ attitudes toward one another showed that fighting as allies did not automatically produce goodwill between the two armies. Disagreements over tactics, strategy, and the command of American soldiers all threatened to sour interarmy relations. Even though many American soldiers chafed under the British guidance during their training, the majority of American and British officers developed an affinity and mutual respect that carried over into the postwar era. Therefore, the armies’ cooperation during World War I laid the foundations for the unique, informal Anglo-American military relationship in the interwar period.