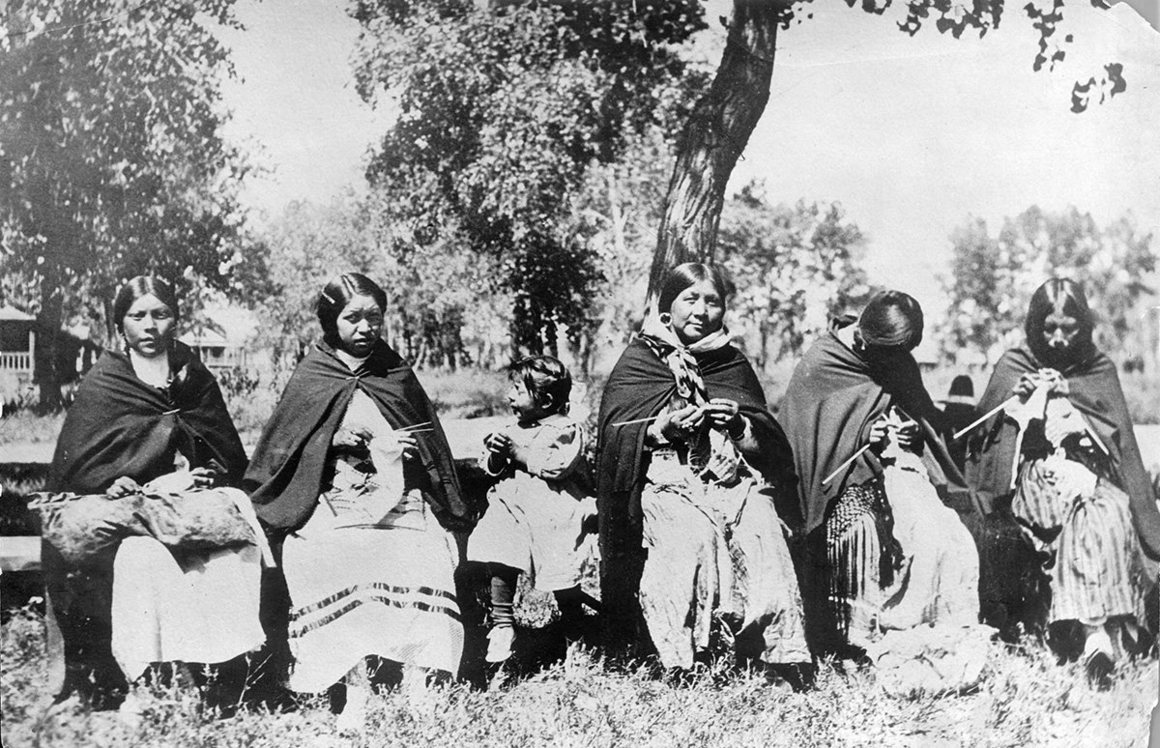 Knitters from the Uintah and Ouray Indian Red Cross Auxiliary Division in Fort Duchesne, Utah in 1918, making warm articles of clothing for American soldiers fighting in World War I. An estimated 35,000 Native American adults and children knitted for the U.S. war effort.

By Matthew Villeneuve
via the H-Net: Humanities & Social Sciences Online web site of the University of Michigan

This is welcome analysis that acknowledges the presence of Indigenous people on the battlefield while favoring a closer study of the memory, discourse, and politics wrought in the commemorations, memorials, and holidays that came in the wake of the conflict. In so doing, Grillot sheds light on the process by which the symbolic repertoire for the expression of Indigenous pride came to include such icons as the American flag, citizenship, and the figure of the GI.

Grillot defines Indian patriotism as "the mix of gestures, ceremonies, and utterances demonstrating love of the country and military loyalty," which constituted Indigenous responses to an American "political ideology linking rights and military participation and a series of teachings, symbols, and ceremonies [which] centered on collective belonging" (p. 11). While military service generated political capital for Indigenous people and their communities, Grillot spends the first portion of the book examining the early twentieth-century period when patriotism was a double-edged sword. On the one hand, military service of American Indian men demonstrated the autonomy and capability that offered a means to resist the paternalism of the Office of Indian Affairs (OIA). On the other hand, celebrating that service and casting citizenship as a "reward" for battlefield sacrifice was just as often yet another front in a larger campaign by whites to impose citizenship on Indigenous people as a vehicle for their assimilation.

Grillot's history tracks how Indigenous veterans and the reservation communities of which they were a part consequently navigated "the intersection of universalistic soldier-citizenship and the particularistic condition of being Indians in the United States" (p. 162). In so doing, these veterans inaugurated a seemingly irrevocable shift from earlier Indigenous participation in armed conflicts alongside the United States as allies, to becoming American soldiers themselves.

Grillot's book contains many examples of Indigenous displays of patriotism that helped to cement this transition. For example, in 1925 the Five Civilized Tribes of Oklahoma purchased one of E. M. Visqueney's now-iconic sculptures depicting an American soldier running with rifle in hand titled "the Spirit of the American Doughboy." Though the statue was identical to hundreds of others purchased by towns across the country, when it was installed in Muskogee, the tribes listed not only the names of their warriors who fell in battle in France but also a longer list of their nation's esteemed leaders and former war chiefs, some of whom had fought against the United States. Grillot argues that for the tribes, their longer martial tradition was not incompatible with their nation's service in the United States' military during World War I.