Although I do not think of myself as a military historian and did not start out as a business historian, my recently completed dissertation arguing that World War I changed Americans’ relationship to mass culture is both a history of the military and a business history. How did I get here?

I knew very little about the First World War before I began graduate school, but I was always vaguely aware it was important. As a fan of sketch and improv, I entered graduate school wanting to explore the roots of comedy in America and wrote a masters’ thesis about vaudeville at the turn of the twentieth century. When I began generating ideas for a doctoral dissertation, I thought I would mine the same vein – I wanted to study how audiences’ reacted to performances they saw, but where could I find letters and diaries from “ordinary” people describing these relatively minor events in their daily lives? 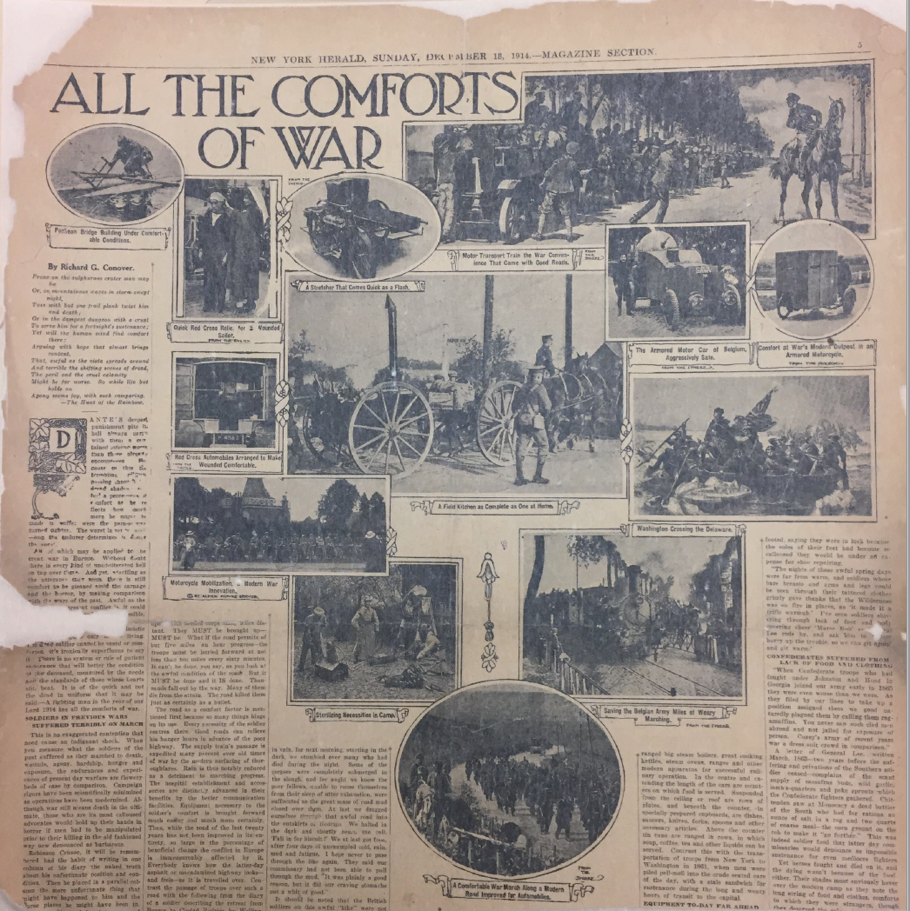 Even before America entered the war, there were many indications it would be important to provide for the daily care and comfort of servicemen in new ways. The New York Herald, December 13, 1914, 5.

Wartime seemed like a good opportunity, since archivists recognize such exceptional moments and collect material documenting men and women’s reactions to a range of experiences during unprecedented times. World War I seemed like a great option – vaudeville was a thriving industry during the era and I assumed entertainers would want to support the war effort. Since the USO formed shortly before the United States entered the Second World War, I also thought I could learn new details about the origins of entertainment for servicemen. It was settled – I would study the history of entertainment in the First World War.

And yet, that is not what my project became. As I read through batch after batch of primary sources at the National Archives and New York Public Library, I quickly realized something very obvious: there weren’t that many vaudevillians entertaining troops. 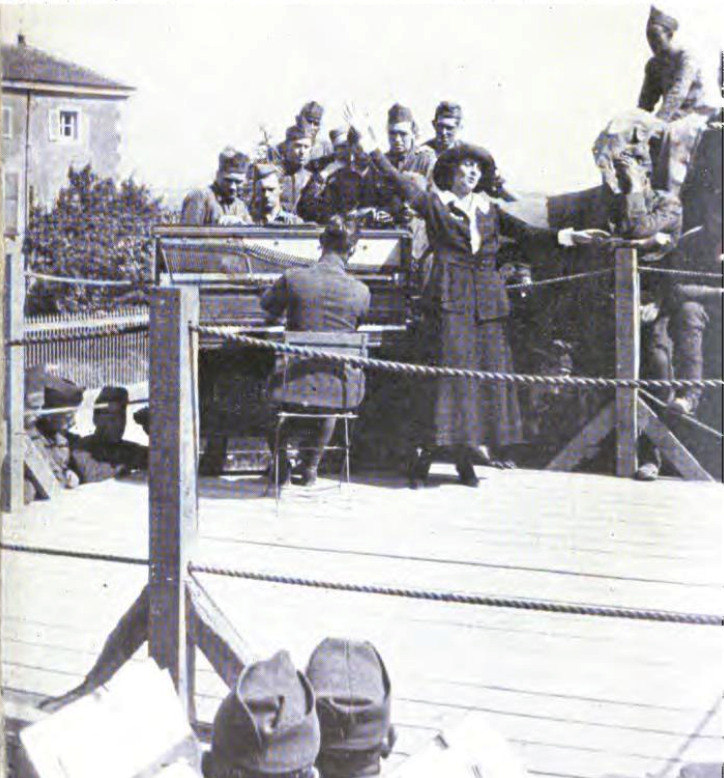 Elsie Janis, the “Sweetheart of the AEF” Elsie Janis, The Big Show: My Six Months with the American Expeditionary Forces (New York: Cosmopolitan Book Corporation, 1919), 100A.

Sure, there were some famous examples, like Elsie Janis, a moderately successful entertainer who spent her own money to travel to France, earning the title “Sweetheart of the AEF.” But, few others followed in her footsteps. Major producers and circuits made headlines in April 1918 after forming the Over There Theatre League to recruit entertainers, but even this failed to send its thousands of volunteers overseas. If soldiers didn’t watch many performances, what did they do with their free time? And, who was actually providing entertainment to them?

While there were great hopes that vaudeville entertainers would travel to Europe to amuse American servicemen, this did not ultimately take place on the scale promoters hoped. Variety, June 7, 1918, 5.

It turns out, conscripts did a lot of things with their free time – and many groups were interested in helping them. As I delved deeper into the history of World War I, I came across work from several historians describing the role of the Commission on Training Camp Activities, which the War Department created in 1917 to keep recruits away from prostitution and alcohol by policing vice industries. I learned the CTCA welcomed support from several non-profit organizations that coordinated alternative entertainments including movies, music, dances, trips, post exchanges, and many other options – but few historians had examined these breadth and complexity of this “welfare work.” 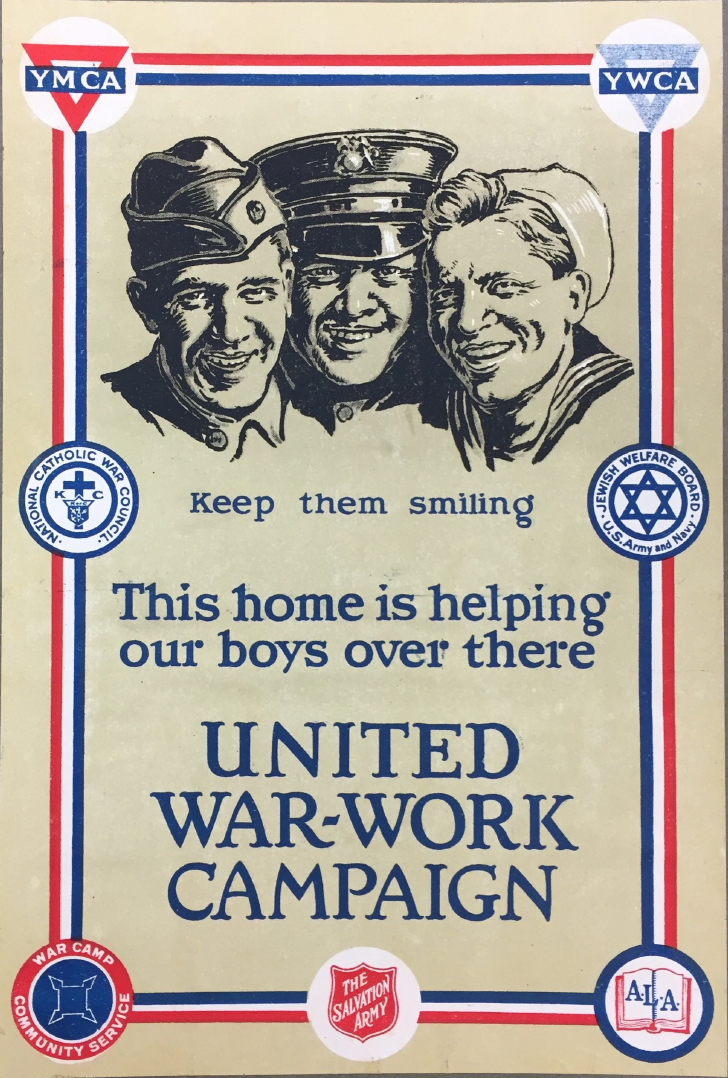 The YMCA was the main organization coordinating welfare work for soldiers, building on its legacy assisting the military since the Civil War. At the turn of the twentieth century, the YMCA had over one thousand facilities across the United States where they fostered middle-class ideals like “muscular Christianity” and the skills to win friends and influence others. YMCA officials developed a variety of welfare programs. These included athletics and motivational speakers that the organization had extensive experience supporting, as well as many other options like the canteens selling snacks and toiletries to soldiers.

However, the YMCA’s shortcomings in operating these facilities alienated servicemen – marketing materials helped the organization raise over $160 million and stressed that staff was assisting men at the front lines, but this rarely happened; the YMCA tried to reach the front, purchasing additional trucks, cars, and motorcycles to expand beyond the French rail network, but found it difficult to find skilled drivers. As a result, troops were very frustrated the care they were promised did not arrive. 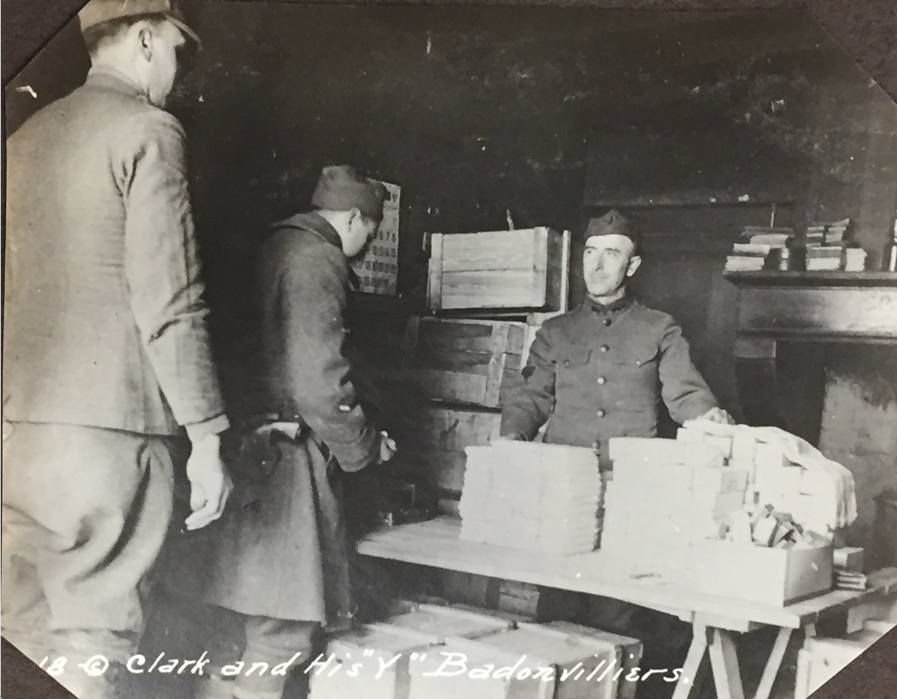 In these instances, the problem was rarely production or procurement, as the government invested in capital upgrades expanding manufacturing capacity for a variety of consumer goods manufacturers. For example, military officials hoped to provide coffee to soldiers as a morale boost before they went “over the top,” but roasted coffee burned too much smoke and could attract German gunfire. They could use instant coffee as an alternative, but the industry was in its infancy, producing only about 6,000 pounds per day for an army that expected 42,000 pounds per day – as a result, the government provided funding to build the crucial bronze drums needed in the manufacturing process. This also had the effect of introducing young men to instant coffee, allowing them to become consumers of the product following the war. 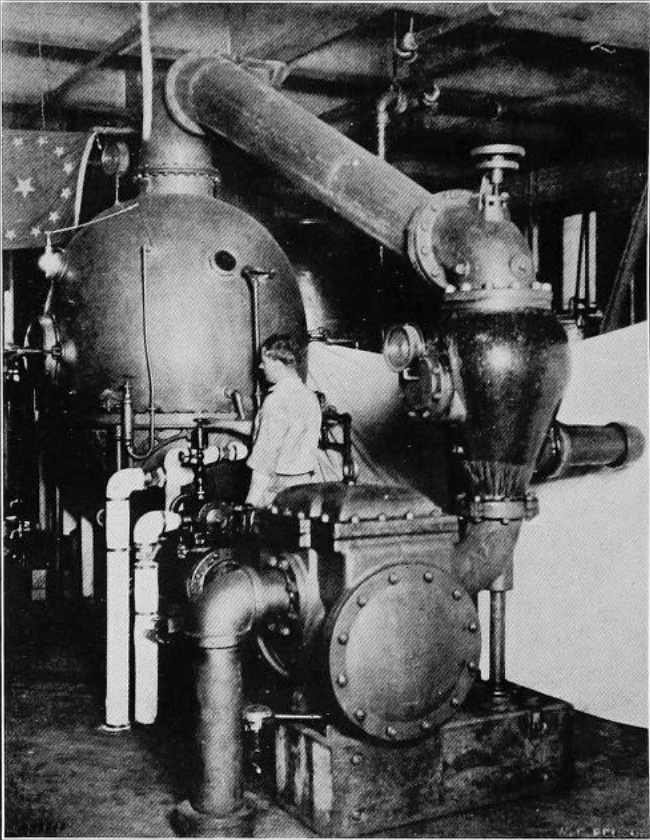 Six other organizations also assisted servicemen, most of which approached their service differently from the YMCA. The YMCA’s emphasis on Protestant Christianity alienated Catholic and Jewish soldiers, leading the Knights of Columbus and Jewish Welfare Board to help, while the Salvation Army offered more personalized service than the YMCA. Two secular organizations also provided aid – the American Library Association and the Playground and Recreation Association of America’s War Camp Community Service, coordinating reading programs and welfare options outside of camp, respectively. The YWCA provided additional assistance to the women staffing other welfare organizations’ efforts. 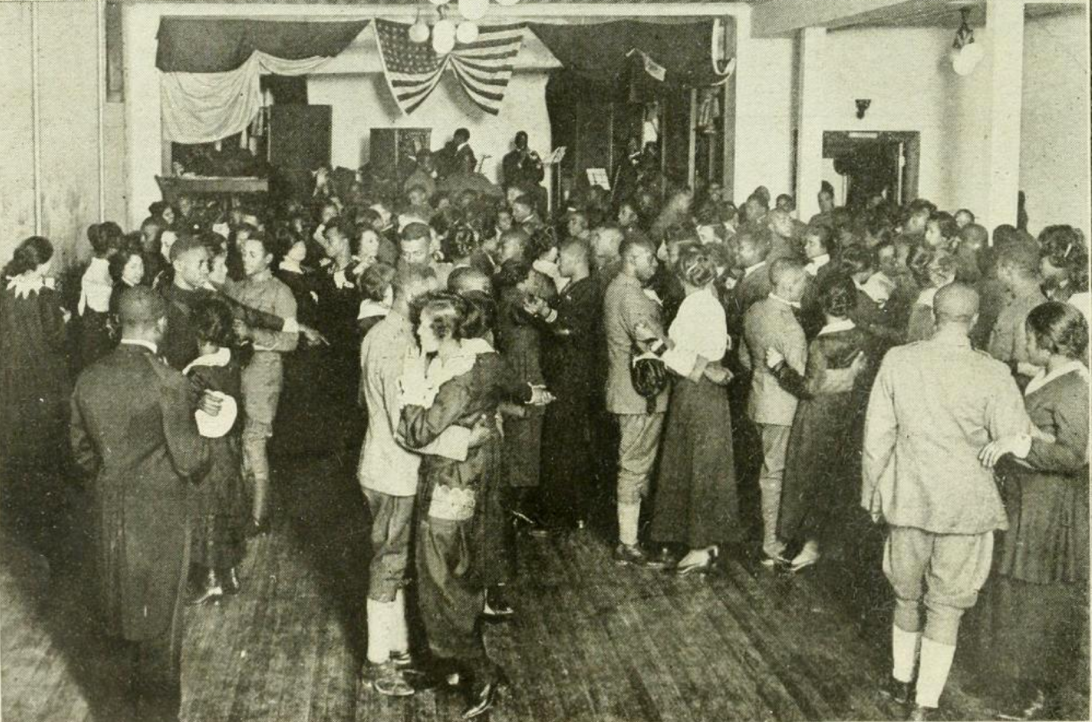 In a segregated society, WCCS financing was one of the only ways the federal government offered financial assistance to African Americans, after local activists demanded funds for communities to provide better facilities for servicemen’s recreation. Emmett J. Scott, The American Negro in the World War (Chicago: Homewood Press, 1919), 48A.

Most organizations provided assistance to servicemen through welfare “huts,” which served as important distribution sites for the variety of goods and services they offered, distinctions which shaped the quality of service. YMCA officials built several huts for 1,500 to 1,800 troops on both sides of the Atlantic, supplying them through a network of warehouses across France. The Knights of Columbus built smaller, more mobile huts to move more rapidly with soldiers and eschewed warehouses in favor of shipping goods directly to their huts to avoid potential congestion delays. 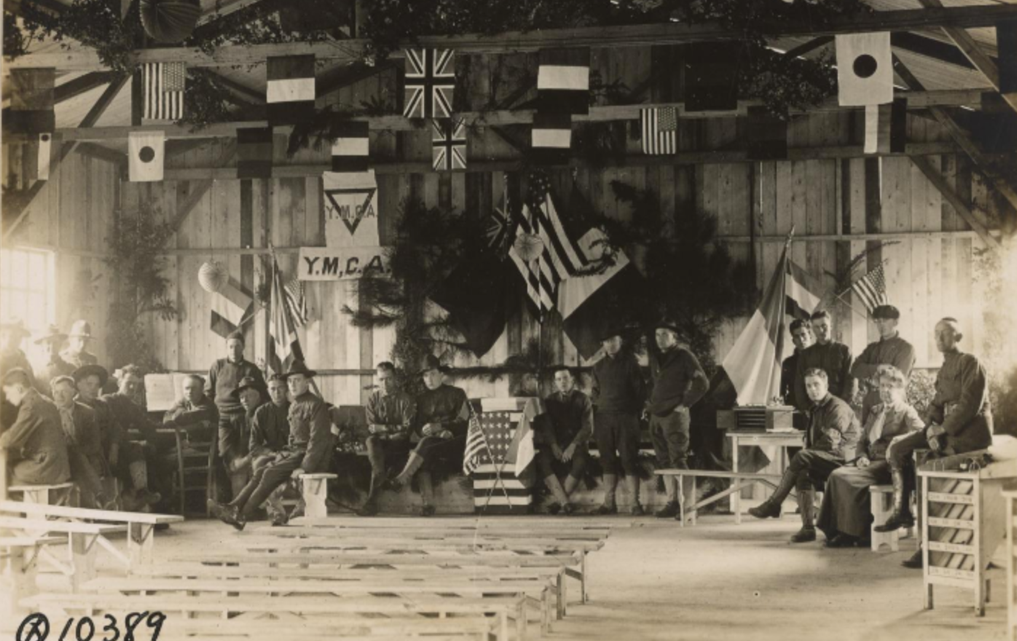 YMCA huts featured a variety of goods and services for recreational activities, like instruments, benches for writing or watching performances, and phonographs. Records of the Office of the Chief Signal Officer, National Archives and Records Administration

While the YMCA struggled in several areas, it was remarkably successful in coordinating an athletic program for servicemen. This was not surprising since the organization had played an active part in American sports for several decades. The YMCA placed significant orders for sporting goods, including one order for about $2 million in gear hyped as the “greatest order in the history of athletic equipment.” Such initiatives allowed troops to play informal games in their down time, while YMCA athletic secretaries (a title for those assisting soldiers) coordinated formal leagues for regimental teams to challenge one another. By the end of the war, the YMCA oversaw massive athletic tournaments for the American military (AEF Games) and its allies (Inter-Allied Games) in the spring and summer of 1919, seen by commentators as a replacement for the cancelled 1916 Berlin Olympics – a substantial undertaking that led the military to construct the new Pershing Stadium in Paris.

The opening of the 1919 Inter-Allied Games brought together competitors for an athletic spectacle held at the newly-constructed Pershing Stadium in Paris. George Wythe and Joseph Mills Hanson, The Inter-Allied Games (Paris: The Games Committee, 1919), 176pA.

What was actually taking place across these programs? Why did some succeed and others fail? After analyzing a range of welfare programs, I argue that World War I was a moment when welfare workers confronted scale and variety (two important issues in mass culture, which strives to match the volume and diversity of consumers’ expectations) and experimented with new advances in business and management to meet these challenges. Some attempts succeeded, as the YMCA found ways to meet the scale and variety of demand within athletics, but in other areas they failed, struggling to recognize processes and procedures that would allow them to distribute consumer products. 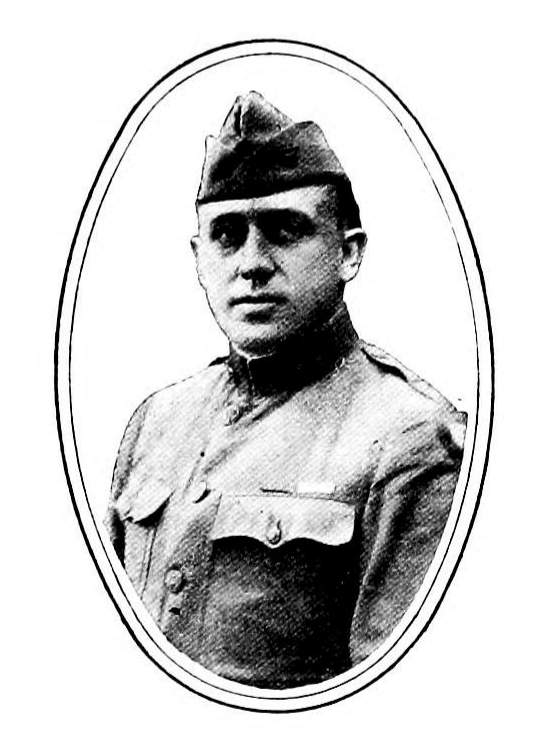 These business-centric discussions and conclusions are obviously a long way from where my project began, but offer a lot of value to historians contemplating dramatic changes to American life during the Roaring Twenties. How did businesses re-scale products and processes for a mass consumer economy? They recruited experts who honed their craft during the war. Elwood Brown, who had overseen the Inter-Allied Games for the YMCA, joined the Belgian Olympic Games Committee to advise their efforts planning the 1920 Olympics, while Quartermaster Corps veteran Robert E. Wood moved on to executive positions with Montgomery Ward and Sears. Examples such as these remind us that the public-private partnerships that develop during wartime have a profound impact on American civilian society. I argue this leads us to rethink the “military-industrial complex” as something far more complicated than munitions manufacturing after the Second World War, as my work suggests it also connects to consumer goods and services much earlier in American history. 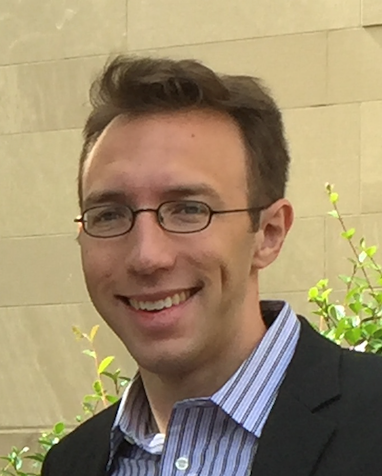 Mark Hauser is a Lecturer in the Department of History at Carnegie Mellon University. He completed his dissertation, “All the Comforts of Hell: Doughboys and American Mass Culture in the First World War,” in 2019.