The 372nd Infantry monument stands near a road approximately nine miles from Monthois (Ardennes) in the French countryside. It is one of the earliest monuments to the African American soldiers who served in World War I. Photos courtesy of Lillian Pfluke, Founder, American War Memorials Overseas Inc.

One of the earliest Monuments to African American WWI Troops

The United States organized two African American combat divisions in World War I. The 92nd Division was organized as a complete division. The 93rd Division consisted of four infantry regiments that were transferred to the French Army. The French Army was very comfortable using African American troops; they had a long history of using Colonial Troops. Soldiers from Senegal and Morocco were an important part of the French Army. The French Colonial troops were considered fierce fighters, and were regularly used as shock troops.

The 93rd Division was quickly put into combat by the French Army. Ironically, the most famous African American regiment of World War I, the 369th, better known as the Harlem Hellfighters, was part of the 93rd Division under French command. The four infantry regiments in the 93rd Division were built primarily around state guard units from Illinois, New York, and Ohio. Ohio's 9th Separate Battalion Infantry was composed of nearly 700 enlisted men that formed the core of the 372nd Infantry.

The 372nd Infantry also contained soldiers from Guard units from the District of Columbia, Massachusetts, Connecticut, and Maryland. The regiment was rounded out with men from Camp Custer (Michigan). On August 31, 1918, the 372nd contained 2708 men.

Today, the 372nd Infantry monument stands near a road approximately nine miles from Monthois (Ardennes) in the French countryside. The monument is neither maintained by the French or American Governments. Local French citizens and American groups help with the monuments maintenance. The link below is from the American War Memorials Overseas Inc.:

The Ohio World War I Centennial Committee has created a lesson plan on the 372nd Regiment:

The monument is a lasting tribute to the sacrifice of the 372nd Infantry, and all African American troops who saw combat in World War I. 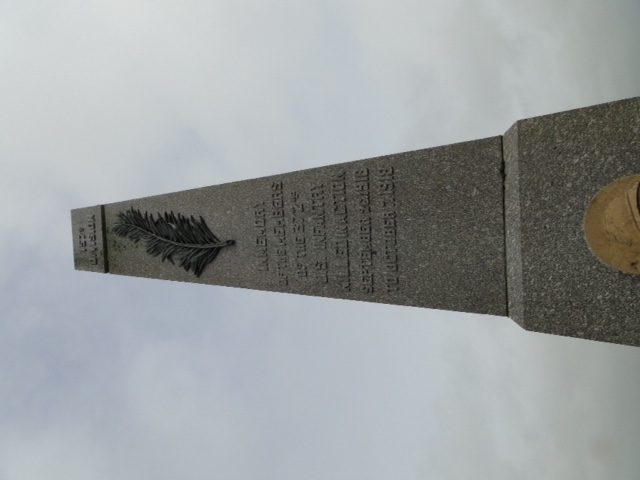