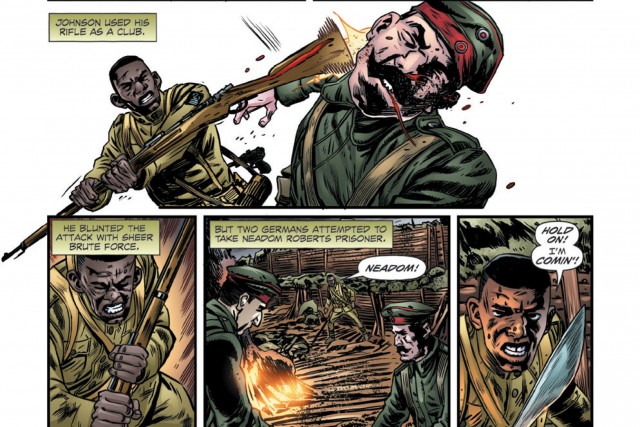 Sgt. Henry Johnson a New York National Guard Soldier who was awarded the Medal of Honor Posthumously for his actions during World War I attacks a German Soldier in these panels from a "digital graphic novel" about Johnson released by the Association of the United States Army. Johnson, who worked as railroad porter in Albany, N.Y. was a member of the New York National Guard's 369th Infantry. He was awarded a heroism medal by the French Army, which the 369th fought with, but did not receive the United State's highest honor until 2015. (Photo Credit: Courtesy Association of the United States Army)

LATHAM, N.Y. – Sgt. Henry Johnson, the Albany resident whose World War I service in the New York National Guard’s 369th Infantry Regiment was recognized with the Medal of Honor almost a century later, is now the subject of a digital comic.

Johnson and Pvt. Needham Roberts were on outpost duty when a German raiding party attacked their position out in front of the trenches. The two Americans fought back with grenades and rifle fire, and when Roberts was knocked unconscious and the Germans tried to carry him away, Johnson attacked them with his bolo knife.

The 369th had been fighting with the French Army and Johnson was the first American to receive the French Croix de Guerre with a golden palm, France’s highest award for bravery. But the Medal of Honor eluded him until 2015 when it was presented posthumously by President Barack Obama.

The 369th Infantry was an African-American regiment in a segregated Army. The unit fought under French command because no American commander wanted them.

They went on to become one of the most decorated units in World War I.

The Henry Johnson digital comic is the sixth produced by the Association of the United States Army, known as AUSA for short, which focus on recipients of the Medal of Honor.

Read the entire article on the army.mil web site.