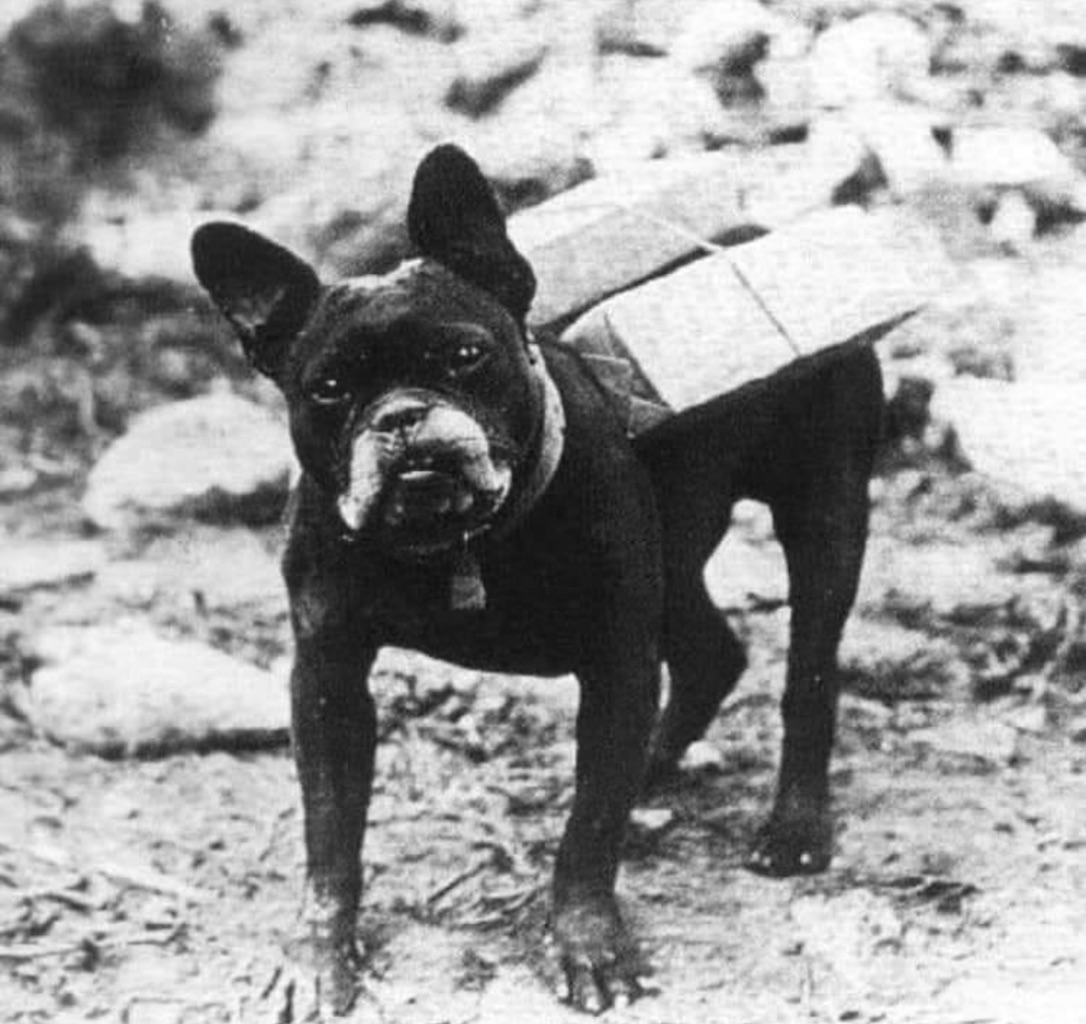 Mutt, a French Bulldog belonging to the YMCA Cigarette Dog delivery service, was wounded twice while trying to improve the morale of soldiers in the U.S. Army's 11th Engineers during World War I.

By Matt Fratus
via the coffeeordie.com web site of the Black Rifle Coffee Company

During World War I, a plethora of “good boys” and dog breeds participated in tasks that would be deemed unusual in today’s modern wars. Among them were dogs who pulled carts with machine guns on the other end, while others hauled supplies. Bruce, a black-and-white British companion, acted as a messenger running urgent orders up and down the Western Front. Rats were a nuisance in the muddy trenches and were so prevalent that the French trained smaller dogs as rat-catchers. Mutt, a French Bulldog belonging to the YMCA Cigarette Dog delivery service, was wounded twice while trying to improve the morale of soldiers in the 11th Engineers.

“No longer could he travel so fast or use the bullet-dodging gait his trainer had taught him,” wrote Albert Payson Terhune, a dog breeder and war reporter, who had witnessed the bravery of Satan, a French messenger dog. “[But he] refused to die while his errand was still uncompleted and … he was too loyal to quit.”

Satan wore a gas mask over his snout, held two baskets of carrier pigeons on the back of his vest, and dashed through no man’s land toward an advanced French position. The commander scribbled in two separate notes of the coordinates of nearby gun batteries and German emplacements, rolled them tightly, and attached each to two of the carrier pigeons. Satan, although his role was small, helped give the men the advantage to survive another day during the Battle of Verdun.

The most widely known “war dog” of World War I was Sergeant Stubby, a short bull terrier mutt. He was the first dog to achieve rank in the U.S. military, and his exploits included comforting wounded soldiers on the battlefield, using his bark to warn soldiers of potential infantry and gas attacks, and he even captured a German soldier. Stubby spent 210 days total in combat and withered 17 enemy engagements while serving with the 26th Division — the most battle-hardened American infantry division of the war.

The 79th Division of the American Expeditionary Forces, commonly referred to as “Philadelphia’s Own,” adopted a stray puppy, named her “Philly,” and smuggled her to France. Like Stubby, Philly barked to warn of sneak attacks. She was twice wounded during her service, once by poisonous gas and another time by gunfire. Philly retired to live with Sergeant Charles J. Hermann and wore her two Purple Hearts proudly when she attended parades and reunions. Following her death in 1932, she was immortalized in taxidermy and is now displayed at the Philadelphia History Museum at Atwater Kent.