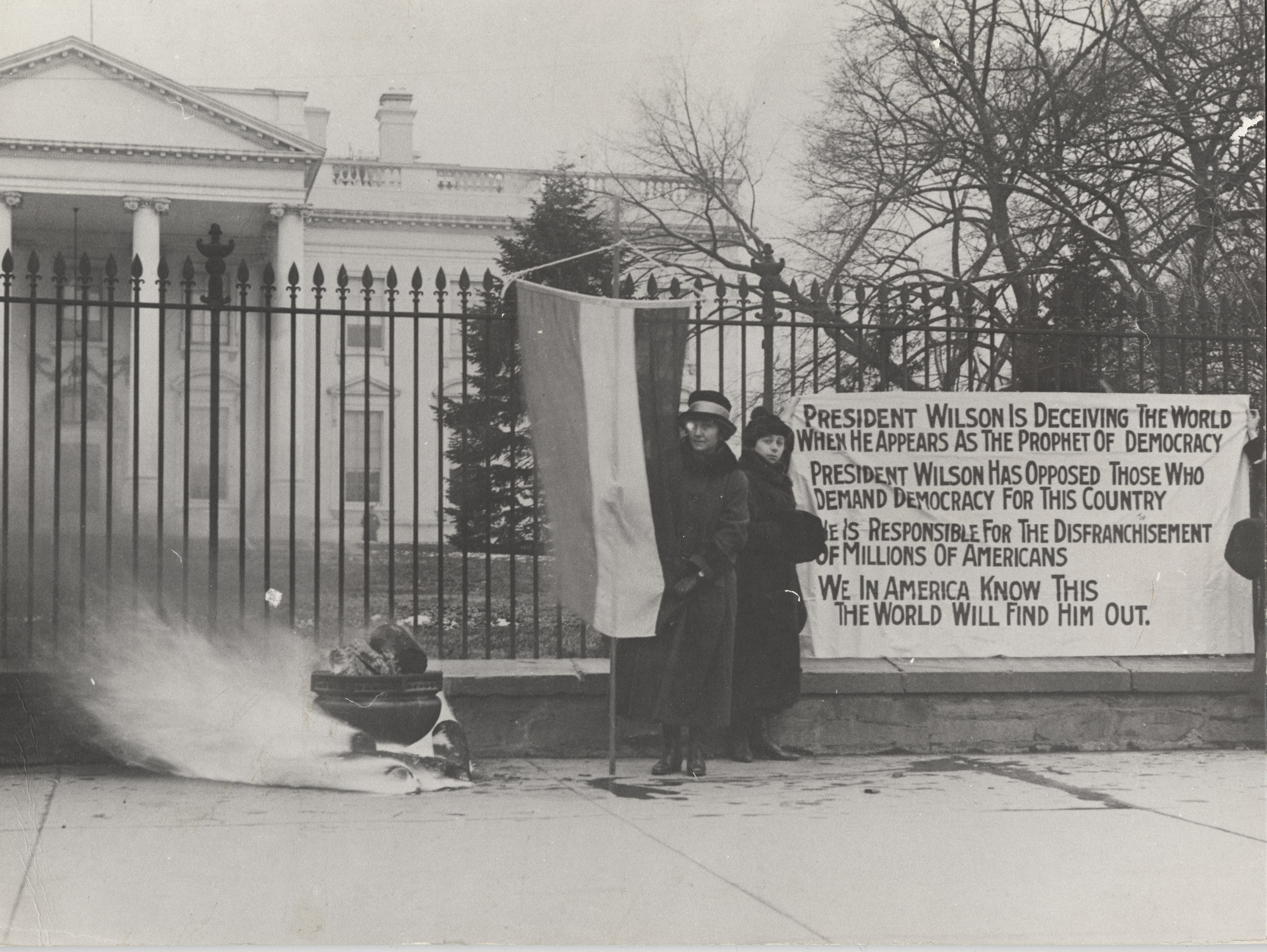 White House Protestors – At the time, a peaceful protest outside the White House in support of women’s suffrage was considered a radical action. When the 19th Amendment to the U.S. Constitution took effect on Aug. 26, 1920, it followed more than a century and a half of activism largely led by women. Its passage was deeply influenced by the significant involvement of women at home and abroad during World War I.

KANSAS CITY, MO. – The National WWI Museum and Memorial commemorates the centennial of the 19th Amendment, prohibiting the denial of voting rights on account of gender, with a new exhibition dedicated to telling the story of the women’s suffrage movement.

Votes & Voices explores the history of the fight for women’s right to vote, largely from the perspective of those who fought for enfranchisement more than 100 years ago. Presented by PNC Bank, the exhibition opens Wednesday, July 29 at the Museum and Memorial.

“World War I and the women’s suffrage movement are inextricably tied together,” National WWI Museum and Memorial President and CEO Dr. Matthew Naylor said. “These two events changed not only the role of women in American society, but also set the stage for the next century of activism.”

The 19th Amendment to the U.S. Constitution paved the way for more than a century of social change. The passage and ratification of the amendment was deeply influenced by women’s significant involvement in World War I, on battlefronts and homefronts.

From working in munitions factories, to volunteering with the YMCA and American Red Cross, to serving in the U.S. Army Signal Corps, to working as physicians and nurses, American women of many ethnicities were not only indelible to the success of the Allies, but also are integral to the global story of World War I. I

Following decades of vicious opposition—even among those who agreed on women’s enfranchisement —U.S. President Woodrow Wilson declared passage of the 19th Amendment “a vitally necessary war measure” on Sept. 30, 1918, nearly 18 months after the U.S. entered World War I. Wilson recognized the important sacrifice and service of women during the war, and equally understood that in order for the U.S. to “lead the world to democracy” action, not just words, was required.

Passed by Congress on June 4, 1919, the Constitutional amendment promised, "the right of citizens of the United States to vote shall not be denied or abridged by the United States or by a State on account of sex."

The amendment reached the 36 states threshold for ratification on Aug. 18, 1920 when the Tennessee House of Representatives approved the “Susan B. Anthony amendment” by two votes.

Though often remembered as the year “women won the right to vote,” in some parts of the U.S., women already had been voting on state levels and practiced “partial suffrage” for years. Other women were denied based upon their race, ethnicity and citizenship—an ongoing threat to democracy then and today.

Votes & Voices shares the story of the women’s suffrage movement through captivating images and words of iconic feminists, such as Sojourner Truth, Lucy Stone, Alice Paul and Susan B. Anthony. Guests can trace the history of the suffrage movement through an expansive timeline that carefully examines the fight for suffrage, beginning in 1492. The timeline highlights events like the Women’s Rights Convention in Seneca Falls, the founding of the NAACP and Sojourner Truth’s “Ain’t I a Woman?” speech.

The exhibit also reaches beyond the 19th Amendment, paying close attention to the 1918 election and women’s roles in WWI, where more than 9 million women mobilized themselves for the war effort. Throughout Votes & Voices, the mantra “the cure for the ills of democracy is more democracy” acts as a central theme, pulling together a variety of feminist voices to show the struggles fought to gain suffrage for all women.

Entry to the exhibition is included with general admission to the Museum and Memorial.

The National World WWI Museum and Memorial is America’s leading institution dedicated to remembering, interpreting and understanding the Great War and its enduring impact on the global community. The Museum and Memorial holds the most comprehensive collection of World War I objects and documents in the world and is the second-oldest public museum dedicated to preserving the objects, history and experiences of the war. The Museum and Memorial takes visitors of all ages on an epic journey through a transformative period and shares deeply personal stories of courage, honor, patriotism and sacrifice. Designated by Congress as America’s official World War I Museum and Memorial and located in downtown Kansas City, Mo., the National WWI Museum and Memorial inspires thought, dialogue and learning to make the experiences of the Great War era meaningful and relevant for present and future generations. To learn more, visit theworldwar.org. 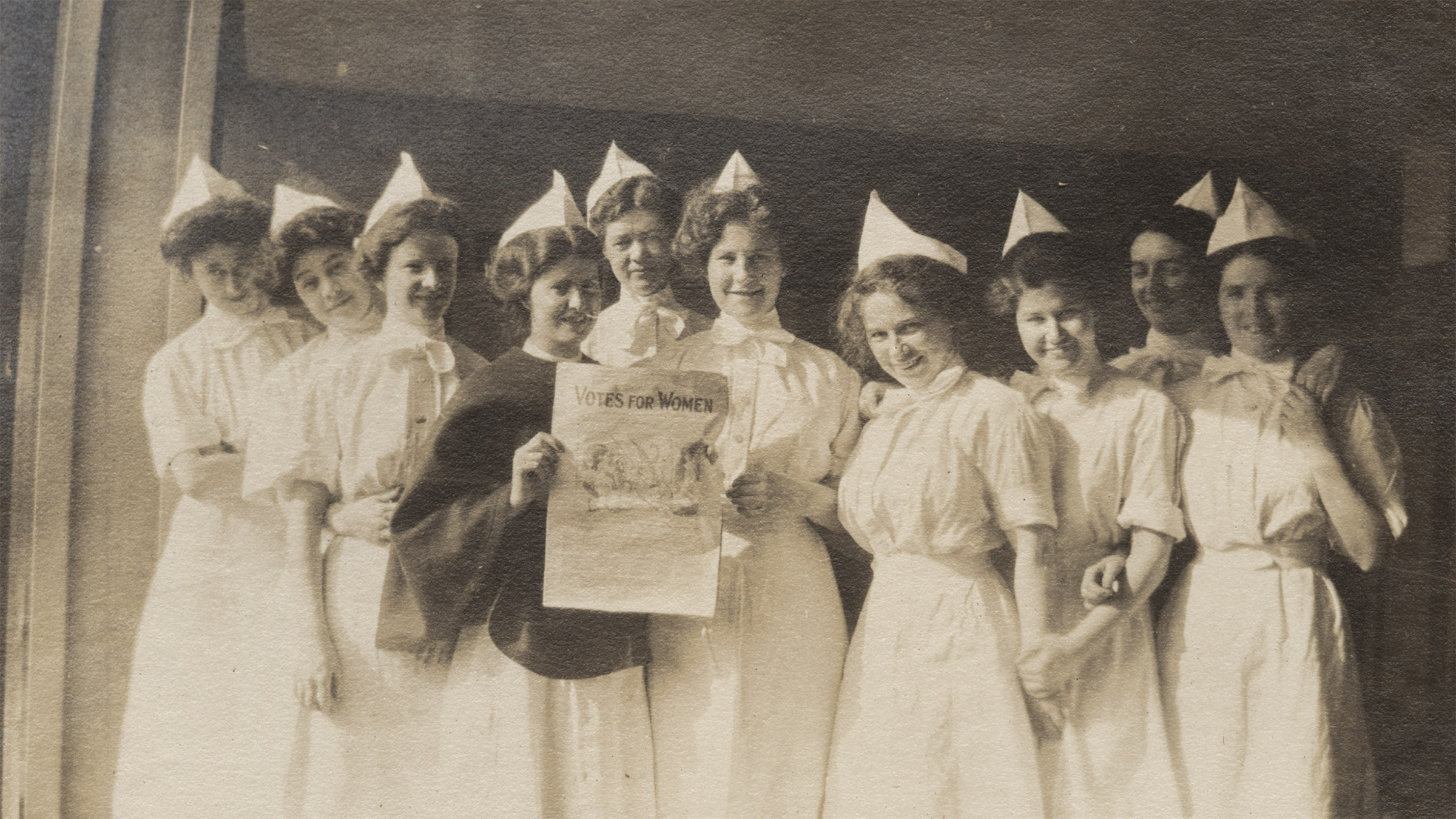 Nurses – The image was from the service of Agnes M. Ward who served with the American Red Cross and Army Nurse Corps in Belgium and France.