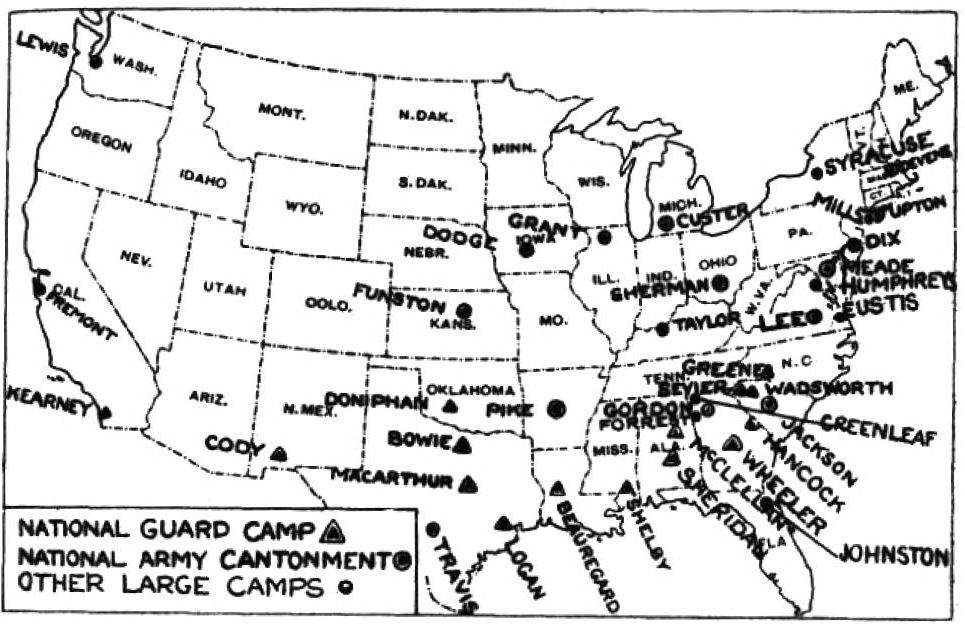 Locations of Army training camps in the U.S. in 1918. WWI mobilization drew millions of Americans into military institutions and extended the military into all corners of the country.

By Carol R. Byerly, Ph.D.
via the US National Library of Medicine, National Institutes of Health web site

The American military experience in World War I and the influenza pandemic were closely intertwined. The war fostered influenza in the crowded conditions of military camps in the United States and in the trenches of the Western Front in Europe. The virus traveled with military personnel from camp to camp and across the Atlantic, and at the height of the American military involvement in the war, September through November 1918, influenza and pneumonia sickened 20% to 40% of U.S. Army and Navy personnel. These high morbidity rates interfered with induction and training schedules in the United States and rendered hundreds of thousands of military personnel non-effective. During the American Expeditionary Forces' campaign at Meuse-Argonne, the epidemic diverted urgently needed resources from combat support to transporting and caring for the sick and the dead. Influenza and pneumonia killed more American soldiers and sailors during the war than did enemy weapons.

In the fall of 1918, U.S. Army and Navy medical officers in camps across the country presided over the worst epidemic in American history, but the story was not new. War and disease have been linked throughout history as armies, weapons, and human pathogens have met on the battlefield. The conquistadores brought with them diseases that devastated the New World; typhus plagued Napoleon's armies; and typhoid fever humiliated the American Army during the Spanish-American War. But now U.S. Army and Navy personnel knew how to test and sanitize water supplies, vaccinate troops against typhoid and smallpox, and treat or prevent other infections. Modern bacteriology, it seemed, had tamed many diseases. Navy Surgeon General William C. Braisted proudly stated that “infectious diseases that formerly carried off their thousands, such as yellow fever, typhus, cholera, and typhoid, have all yielded to our modern knowledge of their causes and our consequent logical measures taken for their prevention.”1

Twentieth-century warfare, however, had evolved to an even more deadly scale as industrialized armies of millions battled on the plains of Eastern Europe, the cliffs of Gallipoli, and in the deadly trenches of the 550-mile-long Western Front. When the European arms race exploded into war in 1914, the empires shocked themselves and the world with the killing power of their artillery and machine guns, their U-boats and mines, and their poison gas. These new weapons generated new, horrible injuries that took life and limb in a flash or festered into gangrenous wounds that could further maim and kill. The carnage traumatized some men into shellshock, and poison gases burned and suffocated others so horribly that nurses dreaded caring for them because they could provide little comfort. War diseases—notably the soldiers' nemeses diarrhea, dysentery, and typhus—flourished, and the trenches offered new maladies such as “trench foot,” an infection caused by wearing sodden boots and standing in water and mud for days on end, and “trench fever,” a debilitating fever transmitted by body lice.

Then, in the fourth dreadful year of the war, as the American Expeditionary Forces (AEF) assumed fighting strength and prepared their first great offensive against the Germans, the flu struck. By the War Department's most conservative count, influenza sickened 26% of the Army—more than one million men—and killed almost 30,000 before they even got to France.2,3 On both sides of the Atlantic, the Army lost a staggering 8,743,102 days to influenza among enlisted men in 1918.4 (p. 1448) The Navy recorded 5,027 deaths and more than 106,000 hospital admissions for influenza and pneumonia out of 600,000 men, but given the large number of mild cases that were never recorded, Braisted put the sickness rate closer to 40%.5,6 (p. 2458)

Read the entire article on the US National Library of Medicine web site.