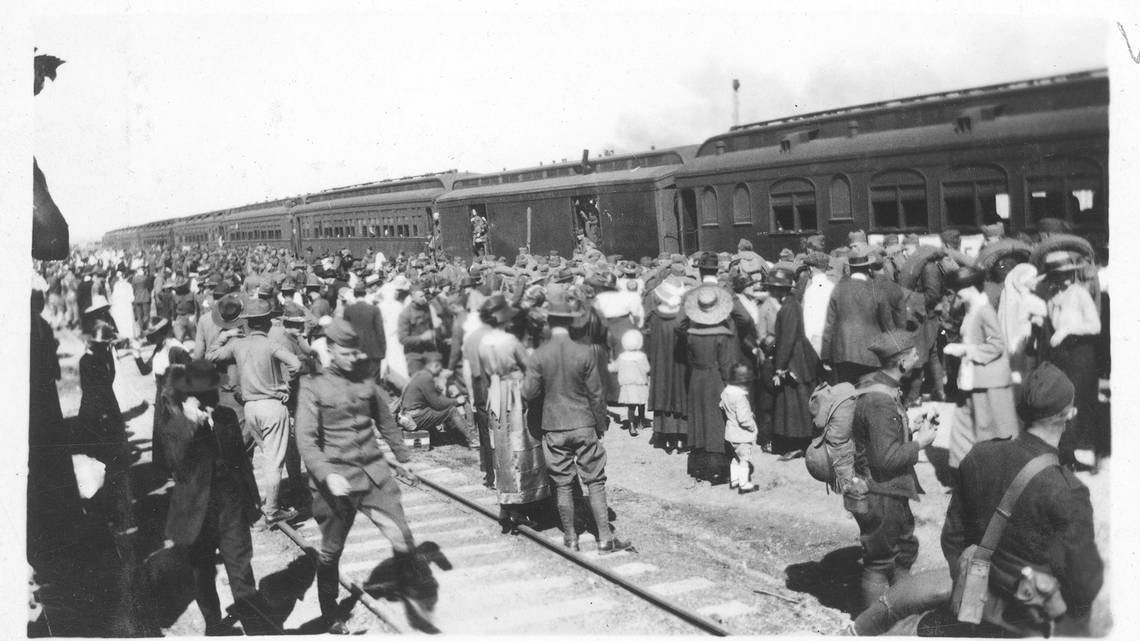 An enthusiastic crowd greets troops from the 132nd Field Artillery (formerly the First Texas Cavalry) as they arrive at Camp Bowie on April 7, 1919, for demobilization.

Communities were abuzz in the spring of 1919.

Hundreds of thousands of United States troops were still deployed across France and Belgium even though World War I had ended in November 1918.

Attention turned toward bringing them home, and the excitement was palpable. Despite the fact that soldiers from other countries had been in the field much longer and suffered unimaginable losses, America wanted to celebrate her heroes and give thanks that the conflict had ended.

Transport ships traveling from ports in France landed on the east coast, disgorging thousands of soldiers at a time. The men were then more or less divided into groups according to where they had lived before the war started (or their original military unit) and quickly put on trains to travel inland.

Military leaders did not want all of the troops to land – and stay – in a few large cities like New York or Boston. Parades scheduled along the train route helped the soldiers to stretch their legs and pace arrivals at the demobilization camps.

Camp Bowie, which had trained regiments of the 36th Division, was a major mustering out point for soldiers from Texas and Oklahoma. At first, troops trickled in, with a few wounded arriving in January and February, followed by brigades that came at the end of March and in early April. Then the would-be civilians arrived in torrents, with most troops reaching Camp Bowie during the first three weeks of June 1919.

No one had more interest in the arriving trains than the families of the returning soldiers. They wore their Sunday best and decorated their cars with American flags. Greeters were deployed, picnics and barbecues planned, baseball games scheduled, and a wild male panther dubbed “Texohoma” was rounded up to welcome returning soldiers.

Read the entire article on the Fort Worth Star-Telegram web site here: