The bronze plaque on the Loudoun County World War I Memorial has stood in the heart of Leesburg for nearly 100 years. Located on the county courthouse grounds, the plaque lists the names of the 30 service members from Loudoun who died during war. Segregated by two engraved lines, on top are the names of 27 white service members; below are three Black men who equally gave their lives for America. 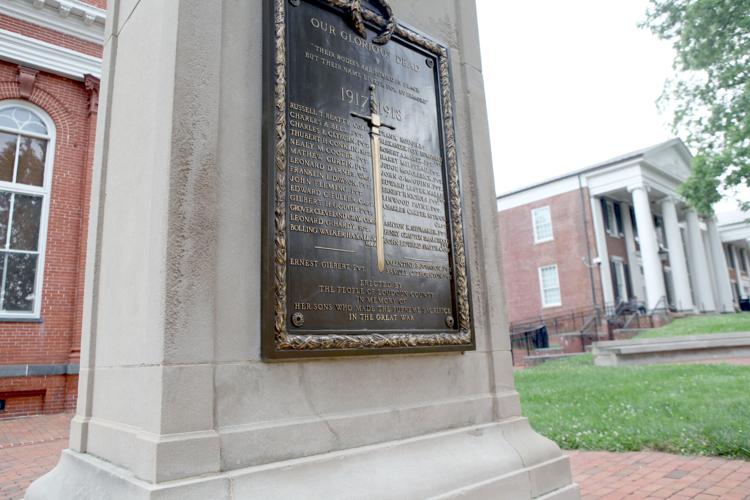 Loudoun County’s World War I monument on the county courthouse grounds in Leesburg.The dividing line may soon be gone.

Loudoun County Supervisor Mike Turner (D-Ashburn) said he plans to propose a new plaque that would alphabetize the names. Turner is aiming to offer a motion to the board in September after the supervisors’ August break. If approved, the Ashburn supervisor hopes a re-dedication ceremony can be held in 2022, the 100th anniversary of the memorial’s installation.

“I knew I wanted it changed, it couldn’t stay the way it was,” Turner, a retired Air Force colonel, said. “I never wanted the memorial removed — that was never my intent. It was always to replace the engraving in a way that reflects the sacrifice of the men who are listed on the plaque and also in a way that reflects justice in America.”

Loudoun County and other localities across Virginia were given the authority by state lawmakers to “remove, relocate or contextualize” war memorials in this year’s General Assembly session. The law went into effect in July.

The controversial Confederate monument in Leesburg, which stood on the courthouse grounds since 1908, was removed last month. The statue was claimed by its owner, the Loudoun Chapter of the United Daughters of the Confederacy, after the Board of Supervisors signaled its intent to remove the monument.

The separating line on the World War I monument hits home for Marilyn Thornton, a Washington, D.C.-based author and the granddaughter of war veteran James Edgar Thornton, about whom she wrote a book. Marilyn Thornton is a relative of one of the Black Loudoun County deceased, Samuel C. Thornton. She supports replacing the plaque.

“Can’t you just see people sitting around in a meeting saying, ‘Oh, let’s put the white boys at the top?’” she said in an interview with the Times-Mirror. “It’s just incredible to me that anybody would think to do that.”

Thornton said she saw the plaque for the first time when researching her 2016 book, “Letters From Edgar’s Trunk,” based on accounts from her grandfather in the 369th Infantry Regiment during World War I. The group was commonly known as the Harlem Hellfighters. The author dedicated the book to the Black soldiers listed on the plaque — Ernest Gilbert, Valentine B. Johnson and Samuel C. Thornton.

Thornton said she could not believe the plaque when she first saw it. She called it “ridiculous,” but said she was not surprised. She recalled meeting Supervisor Turner at an event, and she shared her issues with the monument.

Read the entire article on the Loudoun Times-Mirror web site.