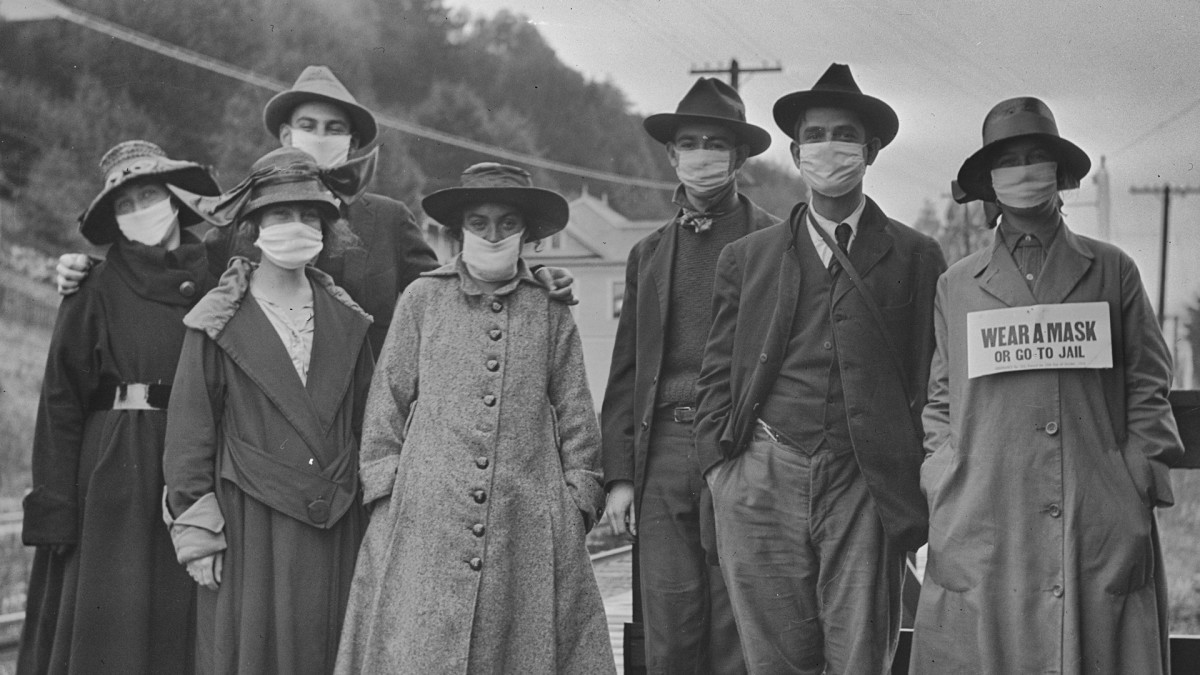 In 1918 and 1919, cartoons, PSAs and streetcar signs urged Americans to follow health guidelines to keep the pandemic from spreading.

By Becky Little
via the history.com web site

Many of the methods Americans used in 1918 to try to prevent the spread of the flu are similar to what people began doing during the COVID-19 pandemic: Close schools. Wear masks. Don’t cough or sneeze in someone’s face. Avoid large events and hold them outside when possible. And no spitting.

Health and city officials got the word out about these guidelines in all kinds of ways. In Philadelphia, streetcar signs warned “Spit Spreads Death.” In New York City, officials enforced no-spitting ordinances and encouraged residents to cough or sneeze into handkerchiefs (a practice that caught on after the pandemic). The city’s health department even advised people not to kiss “except through a handkerchief,” and wire reports spread the message around the country.

In western states, some cities adopted mask ordinances, and officials argued wearing one was a patriotic duty. In October 1918, the San Francisco Chronicle ran a public service announcement telling readers that “The man or woman or child who will not wear a mask now is a dangerous slacker”—a reference to the type of World War I “slacker” who didn’t help the war effort. One sign in California threatened, “Wear a Mask or Go to Jail.”

‘Wear a Mask and Save Your Life!’

The PSA in the Chronicle appeared on October 22, just over a week before San Francisco had scheduled its mask ordinance to begin on November 1. It was signed by the mayor, the city’s board of health, the American Red Cross and several other departments and organizations, and it was very clear about its message: “Wear a Mask and Save Your Life!”

For the most part, San Franciscans listened.

“Red Cross headquarters in San Francisco made 5,000 masks available to the public at 11:00 A.M., October 22. By noon it had none,” wrote the late historian Alfred W. Crosby in America's Forgotten Pandemic: The Influenza of 1918. “By noon the next day Red Cross headquarters had dispensed 40,000 masks. By the twenty-sixth 100,000 had been distributed in the city… In addition, San Franciscans were making thousands for themselves.”

Read the entire article on the History web site.