via the bbc.com web site

A World War One German submarine sunk by a Royal Navy patrol off the Yorkshire coast has been surveyed for the first time. 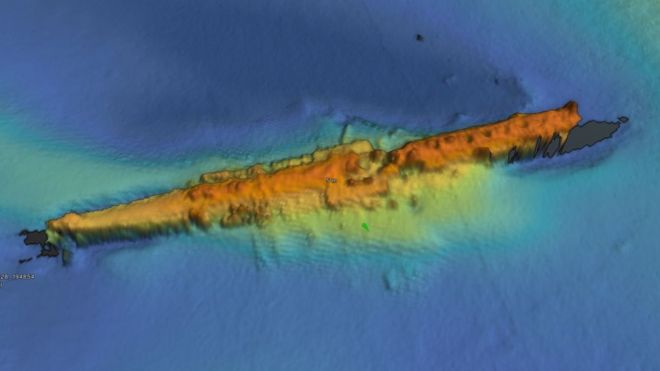 Sonar image of the WWI German U-boat UC-47 at the bottom of the North Sea. The vessel has remained untouched 50m down on the seabed for over 100 years.Previously it had been regarded as a "lucky vessel" within the German Imperial Navy, archaeologists said.

The sub sank with all hands on board in the attack,

It had been credited with sinking more than 50 vessels in the previous year, according to the team surveying the wreckage.

"Today the vessel is only marked on the navigation charts as a shipwreck and until now very little was known of the submarine's condition.

"It has been a privilege to be able to explore a wreck in such good condition and have the opportunity to find out more about its past."

Maritime historian Stephen Fisher added: "The day after her loss, UC-47 is reputed to have been visited by Royal Navy divers who retrieved valuable intelligence, including code books and charts.

"Further investigation of historical sources - when access becomes available as lockdown eases - combined with this detailed imagery of the wreck, might enable us to ascertain if she was indeed visited [at the time]."

Read the entire article on the BBC web site.