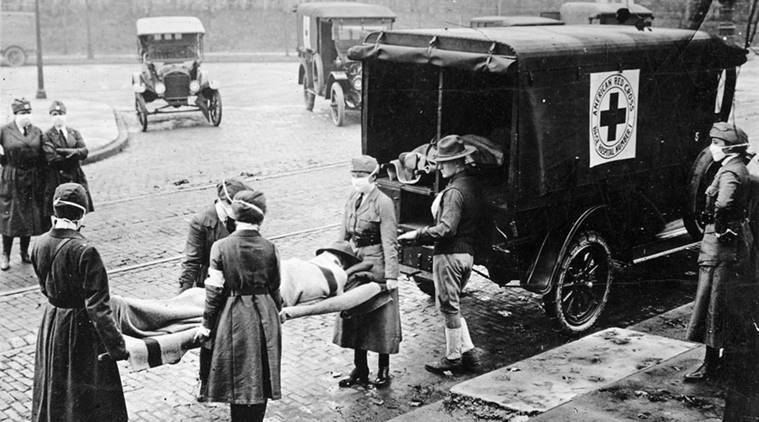 A Spanish Flu victim in St Louis, USA in 1918. Then, as today, an intense debate had ensued over the utility and convenience of wearing masks. Citizens neglected the ordinance, showed defiance, and some also organised protests.

Lessons from 1918 Spanish flu: When mask laws triggered protests in the United States

In 1918, when Americans were busy aiding the Allied powers in the First World War that was raging across Europe, they were beset at home by a deadly influenza epidemic. The Spanish influenza is recorded to have killed ten times more Americans than were killed by German bombs and bullets in the war.

The Spanish flu arrived in America at a time when mass transportation, mass consumption and warfare had opened up public spaces, where infectious diseases could spread. One of the most widespread and devastating epidemics of the 20th century, the flu had also arrived at a time when medicine had advanced by leaps and bounds. Historian Nancy Tomes, in her article, ‘“Destroyer and Teacher”: Managing the Masses During the 1918–1919 Influenza Pandemic’, explained how the influenza epidemic of 1918 was “simple to understand, but difficult to control.”

The flu was first reported in March 1918, at an army base in Kansas where close to 100 soldiers had been infected. Within a week, the number of cases grew five times. As thousands of soldiers deployed for the war moved across the Atlantic, the flu spread with them. Local authorities rolled out a large number of measures to control its spread including shutting down of schools, banning public gatherings, no spitting, and the like. The one measure that turned into a point of debate, was the mandatory wearing of masks. Then, as today, an intense debate had ensued over the utility and convenience of wearing masks. Citizens neglected the ordinance, showed defiance, and some also organised protests that like today, were politically motivated.

The practice of covering nose and mouth as a sanitary practise is traced back to early modern Europe. During the spread of the Bubonic plague, doctors wore a beak-shaped mask filled with perfume. The reason behind wearing this mask was the belief that contagious diseases spread through noxious pollutants in the air or miasma. Perfume-filled masks were believed to be capable of protecting those wearing it. This practise though, began to die out by the 18th century.