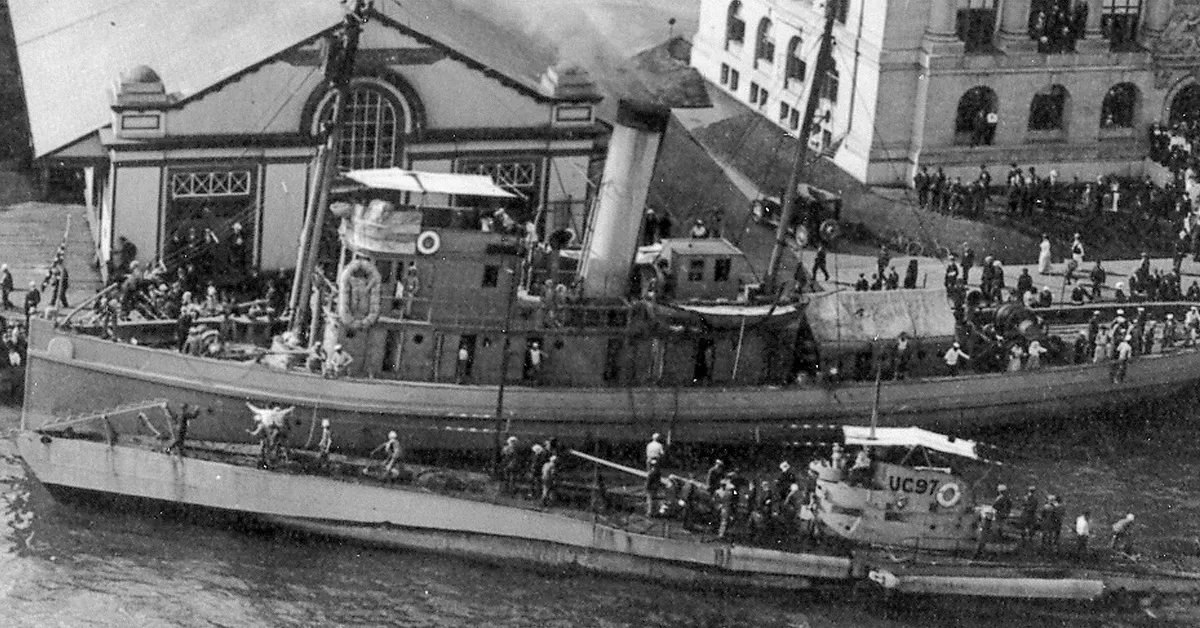 After World War I, the surrendered German U-boat UC-97 was sailed up the St. Lawrence Seaway into Lake Ontario and then Lake Erie and Lake Michigan.

There's a German U-boat at the bottom of Lake Michigan

By Blake Stilwell
via the wearethemighty.com web site

Crewman aboard a ship owned by A and T Recovery on Lake Michigan dropped cameras into the deep to confirm what sonar was telling them – there was a German U-boat resting on the bottom of the Great Lake. Luckily, the year was 1992, a full 73 years removed from the end of the Great War that saw German submarines force the United States to enter the war in Europe. How it got there has nothing to do with naval combat.

In the days before a true visual mass medium, the American people were restricted to photos in newspapers to get a view of what the war looked like. World War I was the first real industrial war, marked for its brutality and large numbers of casualties, not to mention the advances in weapons technology that must have seemed like magic to the people who had never seen poison gas, automatic machine guns, and especially boats that moved underneath the waves, sinking giant battleships from the depths.

So after years of hearing about evil German U-boats mercilessly sinking tons and tons of Allied shipping and killing thousands of sailors while silently slipping beneath the waves, one of those ships began touring the coastal cities of the United States – and people understandably wanted to see it.

The Nov. 11, 1918 Armistice demanded that the German navy turn over its ships to the British but instead of doing that, the Germans scuttled the bulk of their fleet near the British base at Scapa Flow. The submarines, however, survived. Seeing that there were so many U-boats and that German technology surrounding U-boats used some of the best technology at the time, the British offered them out to other nations, as long as the submarines were destroyed when their usefulness came to an end.

The United States accepted one, UC-97, and toured it around the country to raise money needed to pay off the enormous war debt incurred by the government of the United States.

When they successfully raised that money, the Navy continued touring the ships as a way to recruit new sailors. The UC-97 was sailed up the St. Lawrence Seaway into Lake Ontario and then Lake Erie.

It was the first submarine ever sailed into the Great Lakes.

Read the entire article on the We Are The Mighty web site.