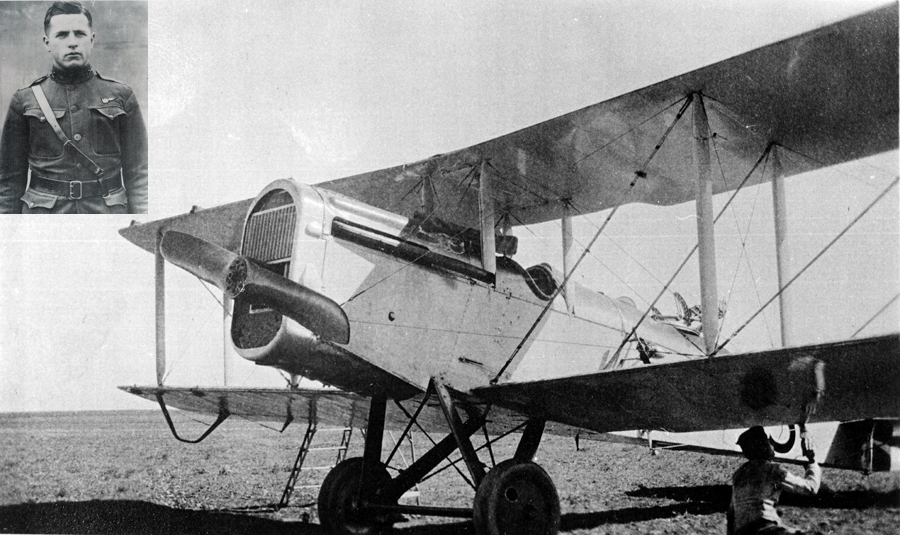 Bleckley Airport Memorial Foundation in Kansas has purchased a World War I DH-4 aircraft to to be restored to air worthy status as a flying memorial to to WWI Medal of Honor winner 2nd Lt. Erwin Bleckley (inset), after whom the airport is named.

WICHITA, Kan. (KSNW) – Throwing supplies to troops below while traveling 125 miles per hour in an open-air biplane, that was the mission in WWI.

It was the first of its kind in combat history, and a Wichita man was there.

Now, the Bleckley Airport Memorial Foundation is on a mission to ensure a piece of history flies the skies of Wichita all to honor 2nd Lt. Erwin Bleckley.

Retired Lt. Col. Doug Jacobs started looking into Bleckley’s life when he realized how few people knew who he was.

“That’s the youngest picture that I have seen of Erwin,” Jacobs said.

Jacobs has been sharing Bleckley’s story for nearly three decades.

“My effort is to keep Erwin alive,” Jacobs said.

Bleckley, and his best friend Frank T. Priest, were the first to enlist in the F Battery of the Kansas National Guard when it was formed in Wichita.

Jacobs read from Bleckley’s diary, ‘I received a cablegram from home, and comma father.’

Bleckley was documenting in his diary in France where he had already volunteered to fly.

“It has the half wing of the air observer,” Jacobs said.

The aviators job was to direct the pilot where to fly, they were attached to the 50th Aero Squadron.

“Erwin would direct him where to go,” Jacobs said.

Read the entire article on the ksn.com web site here: