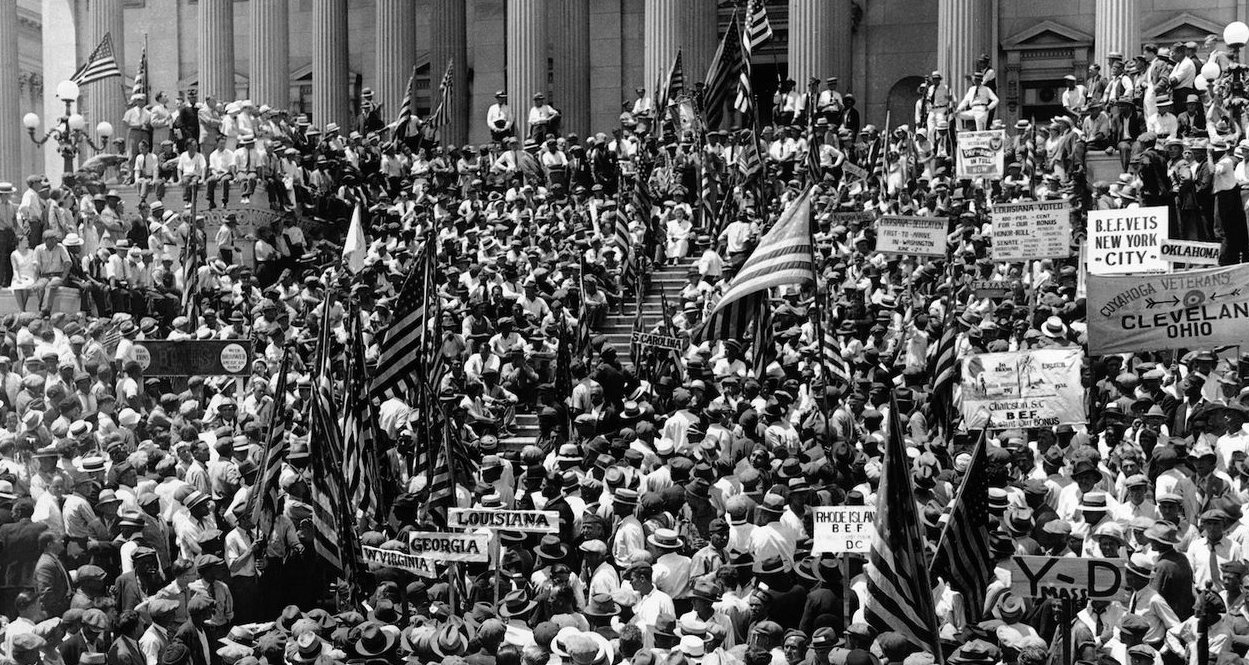 A mass of war veterans gather on the steps of the Capitol in Washington, D.C., on July 5, 1932. They heard their speakers demand again relief for the former soldiers, and then quietly dispersed. (AP Photo)

By Douglas Perry
via the The Oregonian/OregonLive web site

The Oregon native didn’t want revolution or anarchy. But he and millions of other Americans were desperate.

So Waters, a laconic 34-year-old who had fought in France during World War I, led a couple hundred of his fellow former servicemen on a 3,000-mile trek from Portland to Washington, D.C. It was 1932, the depths of the Great Depression. The veterans wanted the federal government to act, and they believed a good place to start would be the immediate cash payment of their World War I service certificates, or bonuses.

This was the Bonus March, and they were the Bonus Army.

The veterans rode in freight-train boxcars when they could. They walked along the sides of dusty roads. The movement grew and grew, with veterans from all over the country heading for Washington.

Around 20,000 men and their families ultimately arrived in Washington, D.C., that summer. They set up camp around a series of unoccupied buildings on Pennsylvania Avenue as well as along the Anacostia Flats across the river. They met with members of Congress and answered reporters’ questions.

Concerned about running a budget deficit, the U.S. Senate in mid-July voted down a bill that would have allowed the World War I service certificates, which were redeemable in 1945, to be paid out right away. When news of the vote arrived, observers worried that the veterans, massed near the Capitol, would try to overrun Congress. Walter Waters, at the head of the crowd, threw his hands in the air.

Read the entire article on the oregonlive.com web site here: