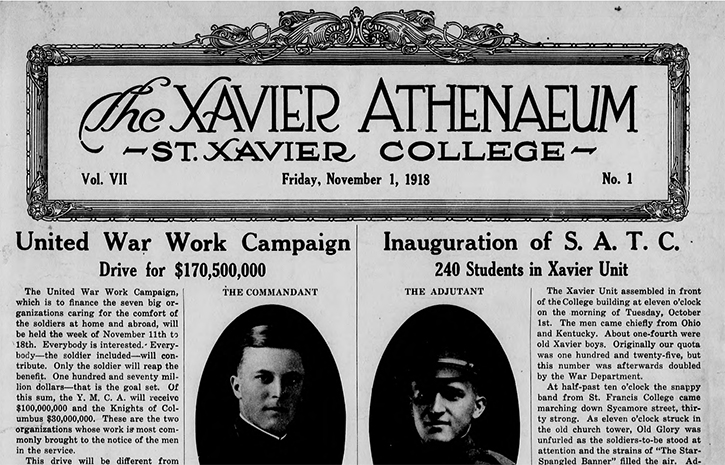 In the fall of 1918, Xavier created its own arm of the SATC, or the Student Army Training Corps, which was a War Department program that hastened the training of soldiers on college campuses. Later that year, the Spanish Flu, a strain of the H1N1 virus, began ravaging the barracks.

By Ryan Clark
via the Xavier University (OH) web site

The city was afraid.

An epidemic was raging, and it had arrived on Xavier’s campus. Students were given masks and quarantined. Visitors were screened before entering buildings.

And still, the disease spread. More than 40 students were infected in one residence hall alone.

Sound familiar? It does — but this incident occurred in October 1918, during the outbreak of Spanish Flu.

While it seems as though this could’ve easily been a description of Xavier classes in the spring or fall of 2020, these scenarios have occurred several times over the past two centuries. And Xavier archivists, media, faculty and students were there to describe each instance.

In the 19th century it was cholera, an infection of the small intestine, and it ran rampant in Cincinnati in the 1840s, helping to cause a decline in University enrollment.

“The year 1848-1849 had experienced a decided falling off in the attendance, and the steady decrease continued for several years,” The Xavier Athenaeum from February, 1916, reported. “One cause of this was undoubtedly the opening of the Jesuit Boarding College at Bardstown, Kentucky in 1848 and the flourishing condition of other Jesuit colleges at Louisville, Grand Coteau and Spring Hill. Perhaps another contributing cause was the cholera epidemic in Cincinnati at this time. The first appearance of this dread disease in Cincinnati in the year 1849 brought about a remarkable manifestation of devotion to the Queen of Heaven.”

Students met, and they made a vow to the Blessed Virgin.

“If all the students were preserved from death by the cholera during its prevalence in the city they would have two golden crowns made, one for the Blessed Virgin and one for the Infant Jesus, to be placed on their respective images in the chapel,” the article stated.

Read the entire article on the Xavier University web site.