BATON ROUGE — John Maxwell Hamilton's highly acclaimed new book on the history of American propaganda is now available (released Oct. 21, 2020) at LSUPress.org. "Manipulating the Masses: Woodrow Wilson and the Birth of American Propaganda" tells the story of the enduring threat to American democracy that arose out of World War I: the establishment of pervasive, systematic propaganda as an instrument of the state. 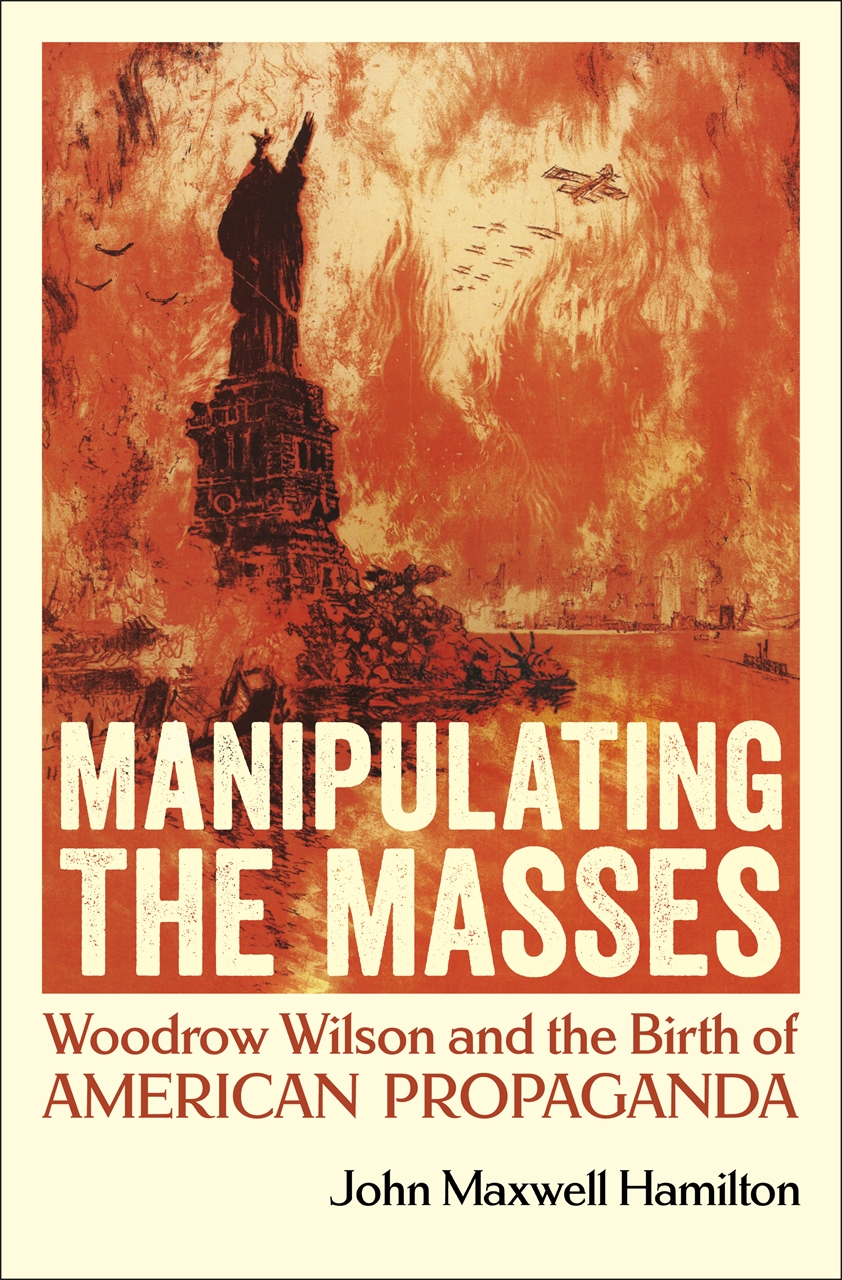 Author John Maxwell Hamilton is a member of The Historical Advisory Board for the U.S. World War One Centennial Commission.

"An instant classic. This stunning history of the origins of American propaganda and the information state unveils the threat to self-government that’s been with us since World War I,” said Thomas Patterson, Harvard University’s Bradlee Professor of Government and the Press. “If you care about democracy, this book belongs at the top of your reading list."

During the Great War, the federal government exercised unprecedented power to shape the views and attitudes of American citizens. Its agent for this was the Committee on Public Information (CPI) established by President Woodrow Wilson one week after the United States entered the war in April 1917.

Driven by its fiery chief, George Creel, the CPI reached every crevice of the nation, every day, and extended widely abroad. It established the first national newspaper, made prepackaged news a quotidian aspect of governing and pioneered the concept of public diplomacy. It spread the Wilson administration’s messages through articles, cartoons, books and advertisements in newspapers and magazines; through feature films and volunteer Four Minute Men who spoke during intermission; through posters plastered on buildings and along highways; and through pamphlets distributed by the millions. It enlisted the nation’s leading progressive journalists, advertising executives, and artists. It harnessed American universities and their professors to create propaganda and add legitimacy to its mission.

Even as Creel insisted that the CPI was a conduit for reliable, fact-based information, the office regularly sanitized news, distorted facts and played on emotions. Creel extolled transparency but established front organizations. Overseas, the CPI secretly subsidized news organizations and bribed journalists. At home, it challenged the loyalty of those who occasionally questioned its tactics. Working closely with federal intelligence agencies eager to sniff out subversives and stifle dissent, the CPI was an accomplice to the Wilson administration’s trampling of civil liberties.

John Maxwell Hamilton, a former journalist and government official, is the Hopkins P. Breazeale LSU Foundation Professor of Journalism in the Manship School of Mass Communication at Louisiana State University and a global fellow at the Woodrow Wilson International Center for Scholars in Washington, D.C. He has authored and edited many books, including “Journalism’s Roving Eye,” winner of the Goldsmith Book Prize.

Advance Praise for "Manipulating the Masses"

"A fascinating study into the origins of targeted misinformation and fake news, and the creators who unleashed them on our world out of misguided patriotism."

"There are fewer more important obligations of government in a democracy to keep citizens informed and to tell the truth. That standard, sadly, has failed at crucial moments in our history and John Maxwell Hamilton’s volume recalls the history of a seminal failure."

"Manipulating the Masses brilliantly tells the story of President Woodrow Wilson’s 1916 re-election campaign and how Wilson used the same techniques to shape public opinion when he took the country into World War I and created the Committee on Public Information. Every public affairs office in government today as well as the private sector’s public relations industry owe their birth to Wilson’s CPI and what was done there. It’s quite a story."

LSU Press furthers the mission of the University by publishing works of scholarly and creative excellence and lasting value, and by informing readers around the globe about the rich cultural assets and traditions of Louisiana and the South. LSU Press is an integral part of Louisiana State University and shares its goal of disseminating knowledge and culture. The Press attracts noteworthy authors from Louisiana, the South, the nation, and the world, contributing to LSU’s academic prominence through a broad array of scholarly inquiry. Additionally, as the largest nonprofit publisher in Louisiana, the Press takes seriously its mission to promote the abundant cultural assets of the state and region to readers around the globe.

LSU’s Manship School of Mass Communication ranks among the strongest collegiate communication programs in the country, with its robust emphasis on media and public affairs. It offers undergraduate degrees in public relations, journalism, political communication, digital advertising and pre-law, along with four graduate degree programs: master of mass communication, Ph.D. in Media and Public Affairs, certificate of strategic communication and dual MMC/Law degree.