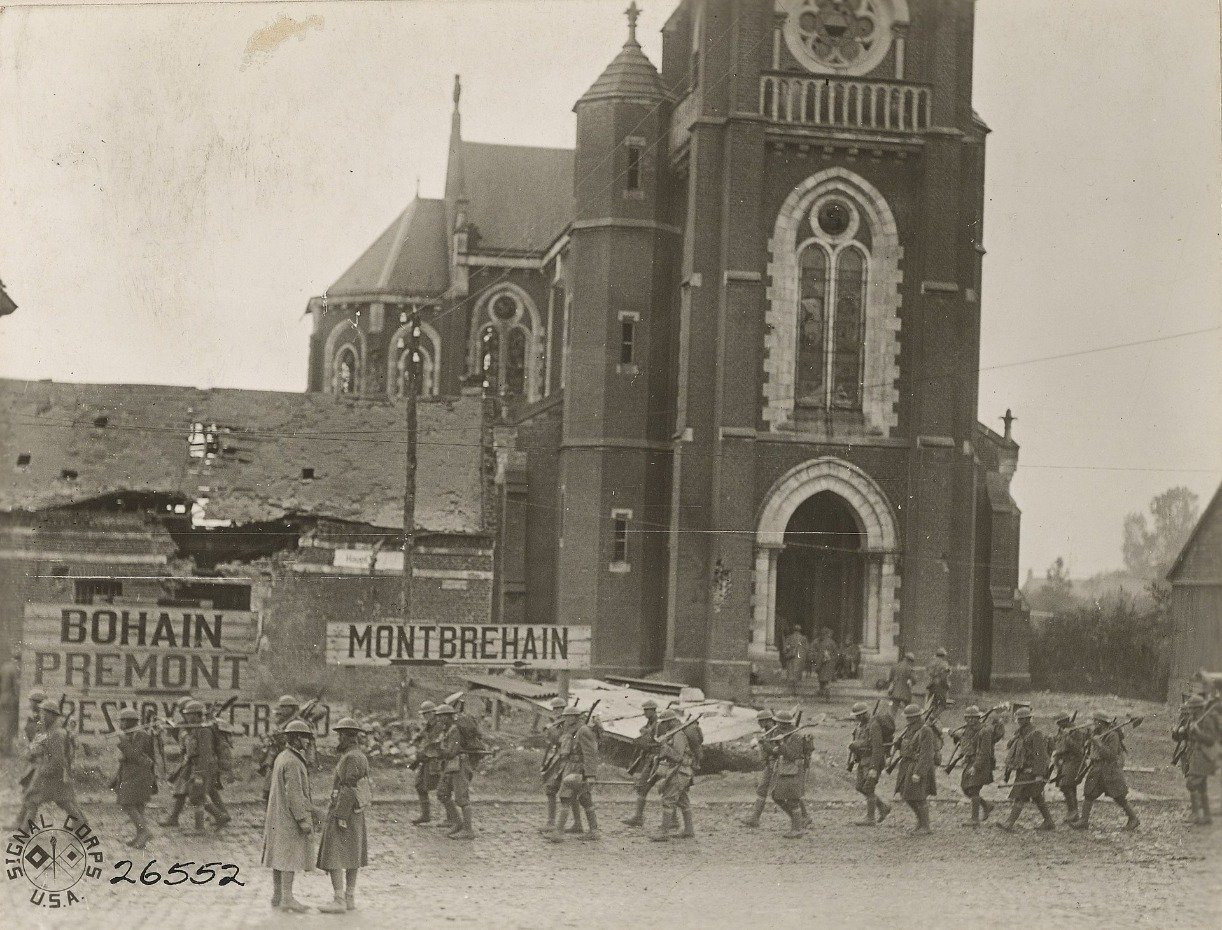 At Cantigny, in their first major battles of World War I, American Expeditionary Force troops helped blunt multiple offensives launched by the German Army in the spring of 1918.

How America Entered WWI with a Bang

By Warfare History Network
via The National Interest web site

s the fateful day drew to a close, the exhausted soldiers of the German 25th and 82nd Reserve Divisions huddled in their trenches. It was May 30, 1918, and for the past two days the Germans had battled elements of the American 1st Division for control of the small village of Cantigny and its environs. Before them the virgin ground had been churned, the town shot up, and its cemetery turned into a ghoulish battlefield of broken headstones and protruding coffins.

While the Americans had given ground, they had not broken, and they had repulsed every assault the experienced Germans mounted. Over the course of the battle, the Americans had whittled the 82nd Reserve Division down to 2,500 effective personnel. The Battle of Cantigny, the first major assault of the American Expeditionary Force (AEF) on the Western Front in World War I, proved that Americans “would both fight and stick,” said Maj. Gen. Robert Lee Bullard, commander of the 1st Division.

The drubbing had been delivered by the 28th Infantry, later reinforced by elements of the 18th Infantry. The Battle of Cantigny began at 4:45 am on May 28. After a 90-minute artillery barrage, the Yanks advanced with three battalions arrayed along a front of 11/2kilometers. Machinegun companies protected each flank. The Americans overran most German forward positions within the first 10 minutes, although the fighting in Cantigny itself came down to flamethrowers, hand grenades, and bayonets. By 8 am the Yanks were digging in, with the 2nd Battalion occupying Cantigny and the 3rd Battalion deployed to the south.

“The success of this phase of the operation was so complete, and the list of casualties so small, that everyone was enthusiastic and delighted,” wrote Colonel George Marshall, who planned the attack. “[However], trouble was coming thick and fast.”

That afternoon, the French withdrew their supporting artillery to deal with a new German offensive. At the same time, German 210mm guns pounded the American positions and tore up the communications wires carefully laid by the 28th Infantry’s engineers. The German counterattack began in the evening and continued into the next morning. The German commander in chief, General Erich Ludendorff, had ordered that the American positions around Cantigny be utterly destroyed for the same reason AEF commander General John J. Pershing ordered that it be held at all costs. “For the 1st Division to lose its first objective was unthinkable and would have had a most depressing effect on the morale of our entire Army, as well as those of our Allies,” wrote Marshall.