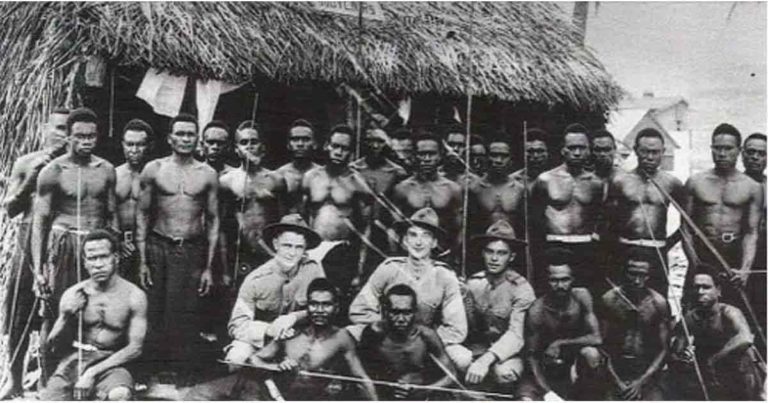 Marines on Guam after the Cormoran incident. The men with them are laborers from German New Guinea who’d been working aboard the raider. Later they were returned to their homeland aboard a Japanese ship, Japan having been on the side of the Allies in World War I. (Guampedia photo)

via the SweetwaterNOW (WY) web site

SWEETWATER COUNTY — On Sunday morning, June 28, 1914, Archduke Franz Ferdinand, the heir apparent to the throne of the Austro-Hungarian Empire and his wife were assassinated in Sarajevo, in what is now Bosnia and Herzegovina, setting off the Great War, later called World War I.

On one side were the Central Powers, which included Germany, Austria-Hungary, Bulgaria, and the Ottoman Empire; on the other was the Allies – at that time Great Britain, France, and Russia, among others.

The United States would not enter the war on the side of the Allies for nearly three more years, and when it did, the first shot an American serviceman fired at an enemy in that colossal conflict was not in the trenches in France or on the battlefields of the eastern front, but in the harbor of a Pacific island over 6,000 miles from his birthplace.

The staff of the Sweetwater County Museum reported on Saturday that Corporal Michael Chockie, United States Marine Corps, the man who fired that shot, was a native of Rock Springs, Wyoming, the son of Austrian immigrants.

The German merchant raider Cormoran, armed with eight 4.1-inch guns, put into Apra Harbor, Guam, on December 14, 1914. Guam was American territory and the United States was still neutral. Nearly out of coal, the Cormoran and her crew were interned by American naval authorities and remained in Apra for the next two years.

Read the entire article on the SweetwaterNOW web site here: