How WWI US Propaganda Grew Out of a Society of Illustrators

By D.B. Dowd
via the hyperallergic.com web site 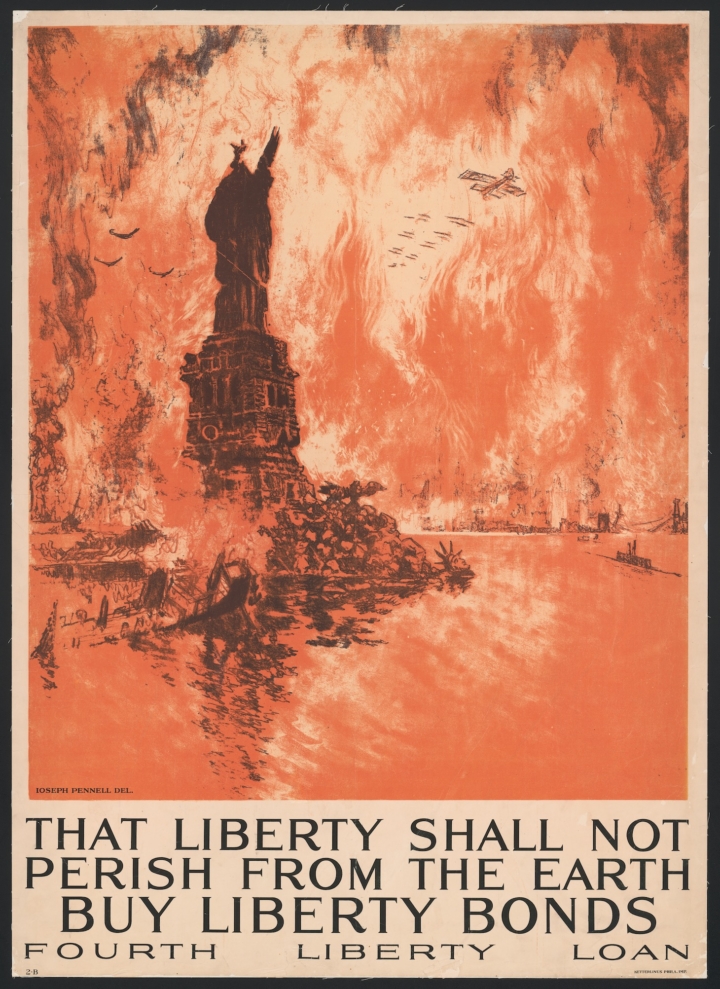 Joseph Pennell, “That liberty shall not perish from the earth — Buy liberty bonds Fourth Liberty Loan” (1918), Pennell uses a simple two-color palette and the rhetorical device of hyperbole to capture what might result from a failure to defeat Germany: New York City enveloped in a firestorm, the Statue of Liberty in danger of collapse beneath aerial bombardment. The personification of Lady Liberty, embodied in Bartholdi’s statue (1886), tethered to Lincoln’s words at Gettysburg, packs more punch than “Wake Up, America!”; Jodi and Louis Atkin Family Collection, D.B. Dowd Modern Graphic History Library, Washington University Libraries (photo by the Library of Congress).Until recently, serious thinking about propaganda had seemed like a subject at rest, tidily contained in reflections on the victory over fascism following World War Two. Since 2010, we have witnessed the worldwide resurgence of populism and white nationalism, especially in the United States. Toxic ideologies and rising authoritarianism are now widely understood as serious threats to liberal democracy. If the echoes of fascism have brought the 1930s and ‘40s troublingly to mind, it’s worth recalling that modern propaganda became a global enterprise during the First World War, rather than the second. For the US, that conflict was brief, lasting less than two years. But the ideological output was prodigious.

When the United States Congress declared war on the Imperial German government in April 1917, belatedly entering World War I at Woodrow Wilson’s urging, the nation was flat-footed, unready for conflict. In addition to a lack of military preparedness, a divided citizenry needed rousing to get on a war footing. A propaganda operation would have to be mustered. Soon that job fell to George Creel, a former Rocky Mountain News editor who assumed the chairmanship of the new Committee on Public Information, an independent government agency formed by President Wilson’s executive order on April 13. Over the next two years, the CPI — a de facto department of propaganda — would sprout many “divisions,” or areas of activity, but few would rival what became the poster shop: the Division of Pictorial Publicity.

Creel understood the propaganda role that posters could play, partly because combatant nations had been using them for years, since the outbreak of war in 1914. In the United States, Creel later wrote in How We Advertised America (published in 1920), “The poster must play a great role in the fight for public opinion. The printed word might not be read; people might choose not to attend meetings or to watch motion pictures, but the billboard was something that caught even the most indifferent eye.”

The roots of Great War visual propaganda sprouted in the last decades of the 19th century, specifically in refinements to large format chromolithography and the development of a spot color design aesthetic by fin-de-siècle French poster designers. By “spot color,” I mean the commercial design practice exploited by Jules Chéret and Henri de Toulouse-Lautrec of modern color assignations for communicative, rather than illusionist, purposes. An international “poster craze” followed the French example in Europe and America.

Another development contributed to emerging propaganda. During the 1890s, a new generation of American magazine publishers developed an alternative for the dusty old “family house” magazines which published literary and historical subjects. The new breed embraced current topics and sought popular appeal, crucially by lowering prices. Because cheaper issues would have to be underwritten by advertising revenue, magazines like Munsey’s and Cosmopolitan sold rafts of ads to new consumer product manufacturers. Advertisements quickly evolved into a fresh visual medium. In the process, magazine covers and full-page advertisements provided the space and money for illustrators and designers to create a new commercial science of word, image, and letterform. Working with editors, art directors, and ad clients, they honed their skills to stimulate, even implant, consumer desire for new products.

Read the entire article on the hyperallergic.com web site here: