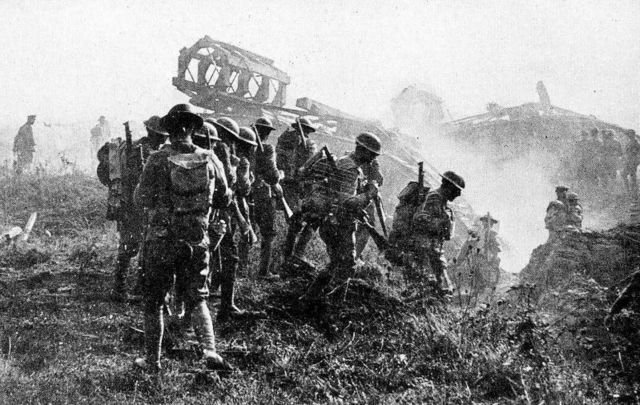 World War I American soldiers on the way to break the Hindenburg Line in 1918.

via the irishcentral.com web site

The number of Irish-born soldiers who died in World War I while serving the United States army is actually three times higher than previous estimates, claimed one genealogist.

Megan Smolenyak, the genealogist who traced Barack Obama's roots to Moneygall, Co Offaly, wrote in the April - May 2015 issue of IrishCentral's sister publication Irish America magazine that previous research "significantly" understated the real losses of Irishmen in the Great War.

"Many more Irish-born were killed serving the American military than previously thought. The true figure may be 900 or 1,000, but it's likely somewhere in this neighborhood," Smolenyak said.

Previously, experts have turned to America's army registration data to investigate the losses. However, the bulk of US military personnel records from 1912 to 1960 were destroyed by a fire in 1973.

After Smolenyak came across a New Jersey database focused on WWI soldiers, she discovered that 69 Irish-born individuals from New Jersey had died during the conflict. As 3,427 from NJ had died altogether, Smolenyak used basic arithmetic to conclude that about two percent were Irish nationals. She then applied a similar method to New York focusing on births, deaths, and enlistment records, using census records, military abstracts and ancestry websites. She eventually estimated that 976 Irish nationals died fighting for the US.

"In spite of these measurement complications, I believe that 976 is a fair reckoning for men of Irish birth who gave their lives in service to the USA in the World War," she wrote in Irish America Magazine.

She says the biggest difference between the new numbers and older estimates is that she had the benefit of "hard casualty data.”

Read the entire article on the irishcentral.com web site.