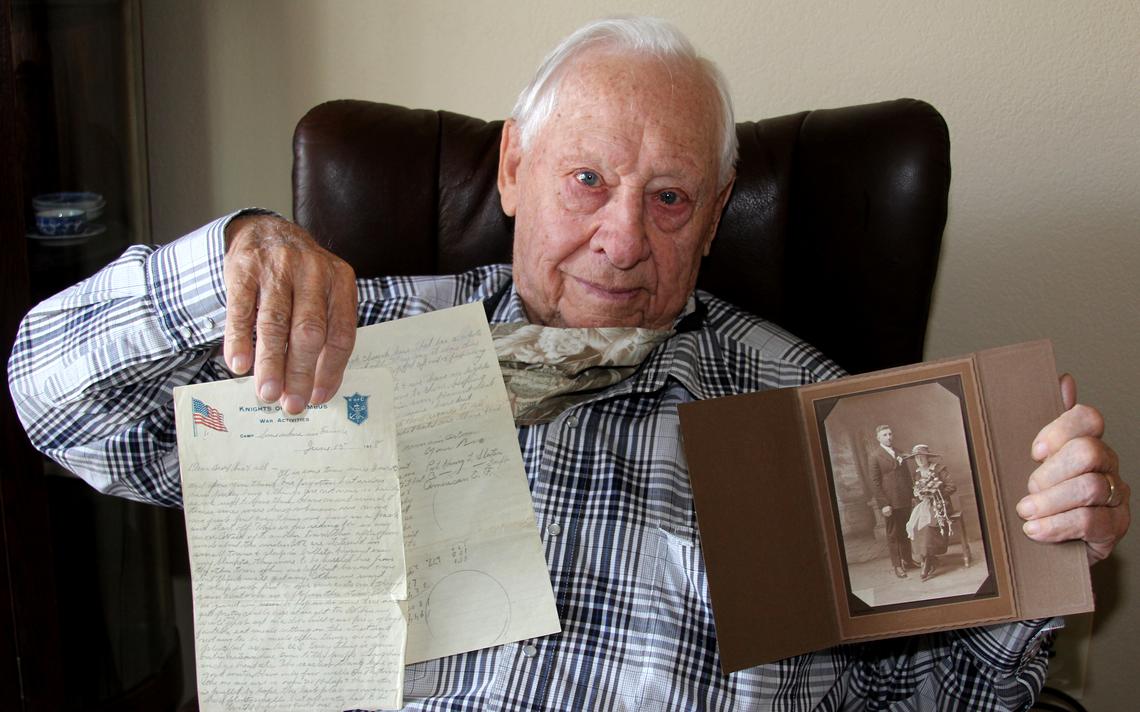 Jim Slater holds the handwritten letter penned by his dad, Henry Slater, while he was serving in World War I. To the right is a photo of his parents, Henry and Lena. (Julie Buntjer / The Globe)

WORTHINGTON, Minn. — A century-old letter written by a Nobles County, Minn., World War I veteran is in the hands of his granddaughter, thanks to a casual conversation among distant cousins at a family gathering.

Henry Slater penned a letter home to his Wilmont, Minn., family on June 15, 1918, from somewhere in France.

“Dear Bro & Sis & all — It is some time since I wrote and spose you think I’ve forgotten, but we’ve been pretty busy & things are not near so handy as we use to have them,” Slater began. “Have moved several times since we’re here & whenever we move we just put everything we have in a pack and start off. ... We are stationed in small towns and sleep in billets. Haven’t even any blankets, they were to be hauled here from the other town when we left, but haven’t come. Don’t think we’ll get any. When we want to sleep, just put on our overcoats and throw raincoats over us and flop in the straw.”

The 25-year-old son of farmers was drafted by the National Army on Feb. 26, 1918, and assigned to serve as a cook in Company C of the 131st Infantry. He spoke of meals eaten while sitting in the street  and “not any too big meals either,” he shared. “Things are not so plentiful as in the U.S. Everything is given out in rations here, even to the people living here. The scarcest thing here is good water.”

Slater said little cans of salmon could be purchased for 80 cents; small bananas for 10 cents.

“Candy or cookies can’t hardly be gotten for any price,” he wrote on paper with the letterhead, Knight of Columbus War Activities, that was provided to soldiers.

The letter was written on Day Four of a march that had soldiers carrying everything they owned to their next destination.

“We had to give away lots of little things we’d like to keep or send home, but nothing doing,” Slater penned. He spoke of daily drills led by Scottish instructors experienced on the front lines, and seeing a lot of English soldiers in the area where he was located.

That the letter is now in the hands of Slater’s son, Jim, and granddaughter, Barb (Slater) Froiland, is a story in itself.

Read the entire article on the Brainerd Dispatch web site.