Norfleet Edward Armstrong was born July 16, 1896 in the far East Texas Town of Center that serves as the County Seat for Shelby County. No doubt the weather was hot when Sarah Jane “Jennie” Lucky and Joseph Emmett Armstrong, both natives of Tennessee welcomed their fourth child. 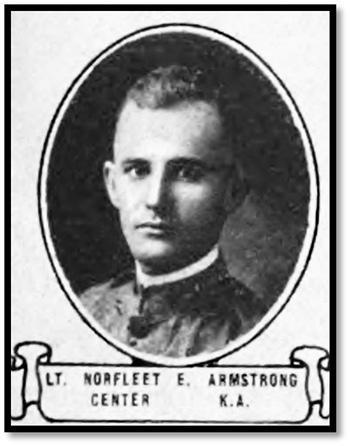 They were married in Shelby County on September 19, 1888 and two of Norfleet’s older siblings, Emmett and Norine passed in infancy. His other sister Jennie was actually a cousin that his parents took in when she was four and raised her as their own. By 1909 the family would be complete with the addition of Mildred, Joseph, Jr. and Brice. Father Joseph, Sr. provided for the family that lived at 212 Tenaha Street as a traveling salesman and by 1910 he was employed in the clothing industry as a dressmaker. Later in life he would become a successful real estate agent.

Norfleet and his siblings attended the schools in Center and in 1914 his attributes from the Junior Class Roll were: Vice President, Jr. Class ’13-’14; Manager Student Booster; Class Poet; Track Team; Basketball; Glee Club; Manager Athletics; Assistant Janitor; Carpenter; Electrician; Flunkie. “Fleet” – A natural born fool, good athlete, very popular among the girls and crazy about electrics. When he was a “babe” if he started to cry, all one had to do was give him an old globe or fuse plug.

He graduated from Center High School with the Class of 1915. According to the June 6, 1915 edition of the Houston Post, Commencement exercises were held in the Methodist Church of Center with Dr. Ramsdell of the University of Texas delivering the graduation address. There were fourteen graduates with Jennie Low Bridges and Norris Bridges the honor students.

With the United States declaring war on Germany April 6, 1917, nearly three years after the World War began in Europe, a national army through conscription was needed. The Selective Service Act of 1917 called for three registrations, the first being June 5, 1917 for all men between the ages of 21 and 30. Instead of registering, Norfleet joined the Enlisted Reserve Corps at the University of Texas, Austin where he entered the Flying Cadet program taking preflight (ground school) training. Then during the summer of 1917 he completed a six week primary flying training class given by the British Royal Flying Corps in Toronto, Canada. More flying training followed at Kelly Field, Texas with Class 13 on October 6, 1917.

Read the entire article on The Light and Champion web site web site.