American nurses have a long and fabled history of selfless service during the most critical times of war.

According to E-ANCA.org, nurses were requested to help the Continental Army in 1776 and during the Civil War.

In 1898, when medical care proved inadequate for the service members struck down by yellow fever, malaria and other tropical diseases during the Spanish American War, 1,500 contract nurses were recruited, and they helped to turn the tide with epidemics. 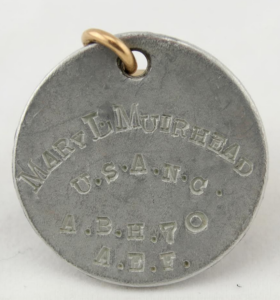 The nursing professionals’ contributions ultimately became the justification for a permanent female nurse corps, and when the United States entered World War I, there were only 403 Army nurses on active duty. But by November 1918, the number rose to 21,460.

Mary Muirhead, born and raised in Elgin, was one of those nurses.

She graduated from Sherman Hospital in 1908 and received a letter dated Feb. 18, 1918, from the American Red Cross, which had been asked to find nurses for service in the U.S. Army and naval hospitals and with base hospitals.

“You are likely to find the methods of procedure in a military hospital somewhat more formal than in a civil hospital and authority more absolute,” the letter said. “May I urge, however, that you accept conditions without comment or criticism and make every effort to adapt yourself cheerfully and without friction to the new environment.

One of her first stops was at Camp Dodge, IA.

On Nov. 1, 1918, Muirhead arrived in New York City, awaiting her next orders. She arrived by train and promptly wrote her parents a five-page letter on Hotel Breslin paper. The hotel was located at Broadway and 29th Street. It is still there today and is called the Ace Hotel.

In the letter she wrote the following:

“We had a very pretty trip all of the way. Ohio with its pretty old rail fences and rolling country dotted here and there with a bit of woodland surely is very beautiful.”

“New York state I shall say is generously supplied with stones. You see miles of stone fences and lots of pretty old fashioned homes built into the hillsides, and numerous little streams rippling down to the stoney hill side …”

“When we went to the dining room at noon after we left Chicago, the girls all marched single file through the train singing the ‘Yanks are Coming & We’re Going Over.’ I was afraid that some of the passengers would be singing ‘the roughnecks have arrived.’