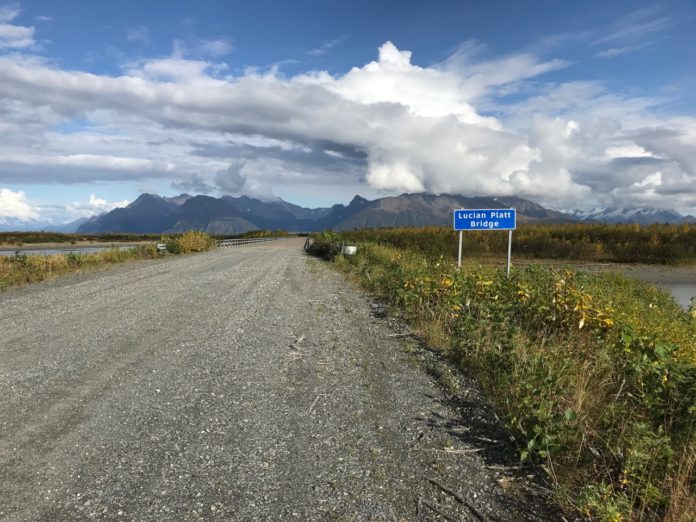 At Mile 34.6 the sign on the last bridge standing on what remains of the Copper River Highway honors Lucian Platt, a Cordovan who gave his life in World War I. Photo by Dick Shellhorn/The Cordova Times

By Dick Shellhorn
via the .thecordovatimes.com (AK) web site

Last week article’s about bridge name signs gave some background into the process that resulted in their installation to honor Cordova veterans who gave their lives defending our country.

This week the focus is on bridges named for servicemen who were lost in World War I. In a way, it seems logical to start in that order, although the bridges are named in the opposite order, with the bridges furthest from town being named for WWI honorees.

In an unfortunate twist, three of the bridges that were to have names are no longer intact or approachable, due to the washout at 36.2 Mile.

One of these bridges, listed as #345, is at Mile 37.9 on the other side of the washout. It was to be named the James Bennett Bridge.

Bennett was the first Cordovan lost in World War I. He was born on April 7, 1892 in Canada, and while assigned to Company C, 18th Engineers Railway Regiment, died on June 29, 1918. His assignment to a railway regiment makes sense, as he was formerly an engineer on the Copper River and Northwestern Railway (CR&NWR) that hauled copper ore from the mines at Kennecott to Cordova.

Bennett left Cordova on March 15, 1918 by the steamer Northwestern to enlist in the Thirty First Engineers at Fort Lawton, Washington. He drowned while swimming in a river near his camp in Samur, France. The Aug. 26, 1918 edition of The Cordova Daily Times stated that “The sad news is conveyed in a copy of ‘The Spiker’, published by the men of his regiment.” Cause of death was believed to be heart failure while in the water. He was buried in the cemetery near Base Hospital No. 6. in France.

Bridge #342, at Mile 37.0, also on the other side of the washout, was to be named the William Morris Jones Bridge. Jones was born on March 1, 1895, in Remsen, New York, and died on July 26, 1918. He served in Company C, Thirty-first Engineers, and was formerly a CR&NWR locomotive fireman. He died of head injuries while performing his duties on a moving train. Jones complained of not feeling well, went to an open window for fresh air, and was struck by a pole. It was stated that clearance on the French railroads was not as wide as it was on American railroad.

The Flag Point West Bridge at Mile 26.7 is named after his brother John W. Jones, who died in action three months later on Nov. 3, 1918 in the battle at Argonne Forest, France. John, the older brother of William Jones, was born on Nov. 22, 1893, also in Remsen, NY. He too, was an employee of the CR&NWR prior to entering the service.

Four months prior to his death, John, a Marine, was awarded the French Croix de Guerre, a medal that recognized acts of bravery, for his actions on July 18, 1918, when under heavy shell fire, he helped carry his severely wounded company commander three kilometers to an ambulance station near Vierzey.

He died eight days before the end of the war.