The Springfield Park District board voted Wednesday to rename a near north side park after Otis B. Duncan, the highest-ranking Black officer to serve in the American Expeditionary Forces in Europe during World War I. 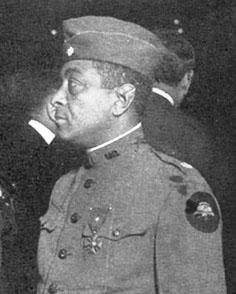 Otis B. DuncanStephen Douglas’ name was removed from the 26-acre park, which marks its centennial this year, by a board vote on Sept. 16.

The 6-1 vote at Erin’s Pavilion at Southwind Park came on the 147th anniversary of Duncan’s birth.

“It gives us an opportunity to honor someone who is truly worthy,” park board president Leslie Sgro said of Duncan, before the vote. “I just love the idea we put forward this individual who has long been overlooked, I believe. His star is starting to shine in our community, as it should have for a century, but better late than never.”

A ceremony for the renaming will be held at a later date, Sgro said.

“We’re very proud and pleased on the consideration of renaming the park after our namesake,” said American Legion Post 809 Commander Richard Rump. “In this day and age, in light of current social movements in the country, I think it’s a very positive move for the city and for the park board.”

The Springfield post was named for Duncan shortly after his death in 1937.

The last park in the district to change names was Colony West Park, in the Colony West subdivision. It was renamed Patrick J. Cadigan Park, for the longtime park board president.

There has been a recent backlash against Douglas, who served as a U.S. Senator from Illinois and was a one-time presidential candidate.

Nicknamed “The Little Giant,” he is perhaps best known for his debates with Abraham Lincoln for the senate seat in 1858.

The park district took suggestions for names on its website.