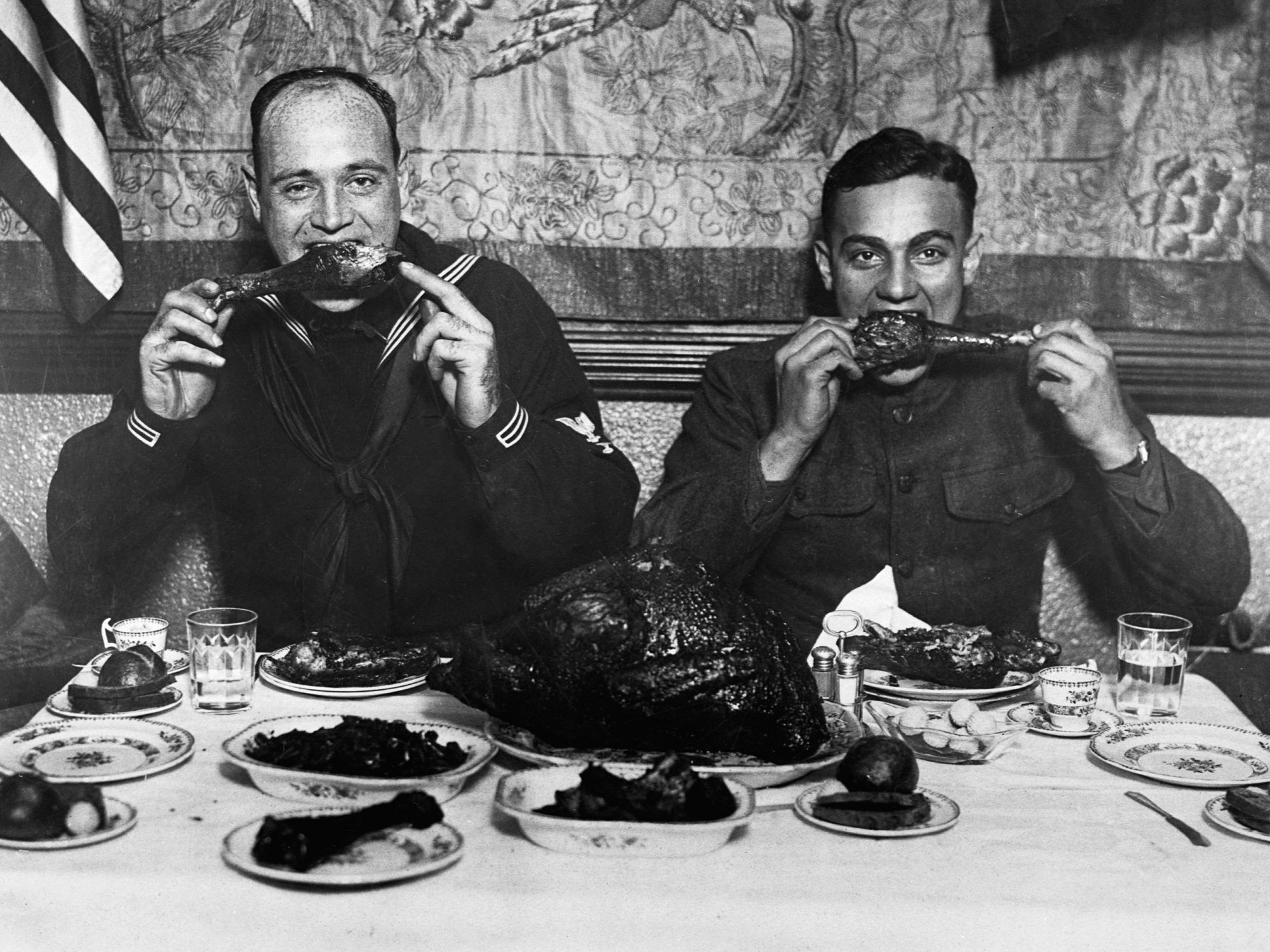 Americans experienced five Thanksgivings during wartime before the Treaty of Versailles was signed, meaning that things looked decidedly different at the holiday dinner table. Among the familiar favorites, you'll find some eyebrow-raising items.

What Thanksgiving Looked Like During World War I Rationing

By Hayley Sugg
via the allrecipes.com web site

In 2020, it's safe to say most of us are experiencing a highly unusual Thanksgiving. Between eschewing gathering with family and friends to making do with different dishes due to food supply issues, it has seemed like one of the weirdest holiday seasons to date. But not so long ago, before the nation was grappling with the novel coronavirus, the United States was battling another foe: the Central Powers of World War I.

As WWI raged on, Americans experienced five Thanksgivings during wartime before the Treaty of Versailles was signed, meaning that things looked decidedly different at the holiday dinner table. We spoke with historians at the National WWI Museum and Memorial to learn more:

What Did Families Eat?

Food shortages during WWI made ingredients like wheat, sugar, dairy, and red meat hard to source. Instead, the U.S. government recommended swapping in similar ingredients, such as poultry, fish, corn, rye, molasses, and honey. They also released Win the War in the Kitchen, a helpful cookbook to encourage citizens on how to eat, including a chapter titled "War Service in the Home."

But despite these challenges, many recipes we know and love today were also enjoyed by families a century ago, according to the National WWI Museum and Memorial. "Classic dishes include turkey, candied sweet potatoes, cranberry sauce, oyster stuffing, apple pie, pumpkin pie, mashed potatoes and gravy, and more," says the team. Some of the dishes that are less common now, but were a staple back then, are options like mayonnaise salad, carrot pudding, or mince pie.

What Did Soldiers Eat?

The National WWI Museum and Memorial's archives boasts a large collection of Thanksgiving-related information, including menus, letters, and calendars that all help us learn what the United State's military was serving up. In many ways their holiday menus looked similar to ours today, with soldiers dining on options like turkey, oyster dressing, cranberry sauce, vegetable sides, and a variety of pies.

One soldier, Thomas Shook, wrote a letter to his parents about Thanksgiving while stationed at Camp Funston in Kansas, "I have ate so much today that I can hardly travel. We sure had some feed. Had tea for first part of feed and coffee for last. First was turkey, dressing, mashed potatoes, sweet potatoes, onions fresh, celery, lettuce fresh, cranberries, and bread. Ate this at the tables then the cooks and kitchen police brought us mince pies, apples, oranges and pears." While the menu varied greatly depending on the soldier's location, one consistent thing the Museum's team found was that "Nearly every menu included cigarettes [or] cigars."

Read the entire article on the allrecipes.com web site here: