Learning about The Great War – through cards

In 2018 I was publishing World War One Illustrated magazine for the educational non-profit World War One Historical Association (ww1ha.org). In February of that year my work involving the Great War led to a once-in-a-lifetime opportunity, which in turn led me to create an educational, immersive card game on the subject. 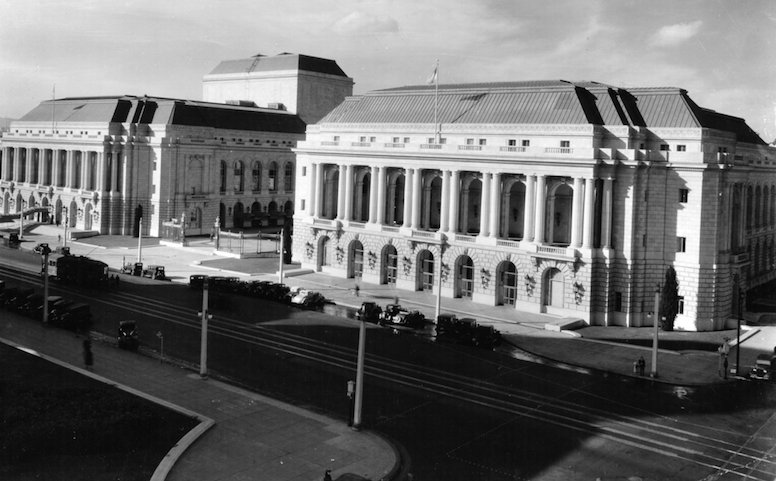 The SFWM and the U.S. World War One Centennial Commission

The San Francisco War Memorial building complex houses the American Legion and Veterans of Foreign Wars, Herbst Theatre, Opera House, and San Francisco Ballet. The complex was dedicated on November 11, 1932, as a memorial to all American veterans who served in The Great War.

In February 2018 I was asked to give a presentation to the SFWM’s trustees regarding why a centennial exhibit about the First World War was important for them. They concurred, and I was then asked to:

In late May of 2018, eight 8-foot square banners were installed in the lobby of the War Memorial Veterans Building (see photo). In 2019 the banners were moved to the second floor in a permanent display free to the public. These banners can be viewed online at http://alwmcsf.org/ww1/ enabling people from around the world to continue to “visit” the exhibit.

(Left) Dana Lombardy and daughter Erin in the lobby of the War Memorial Veterans Building with the banners; (Right) A few of the artifacts displayed in the Gallery next to the lobby.

The project consumed me. For eleven months in 2018 I lived for The Great War. But my extensive research resulted in another creation, one that might reach an even larger audience: a simple, fast-playing card game about World War One that could educate while it entertained.

Games have proven to be successful classroom tools. If done well, they improve learning and retention. I knew the game had to be historically accurate, but it also had to be easy to learn, with few rules (two sides of one sheet) and dozens of interesting photos and illustrations to immerse players in the time period.

I was very fortunate to have as a colleague and friend game industry Hall of Fame graphic artist Rodger B. MacGowan. In a career spanning nearly fifty years Rodger had designed dozens of illustrations for numerous World War One games that could be repurposed to create playing cards. He liked the concept, and we went to work creating MacGowan and Lombardy’s The Great War™ card game. Dozens of colorized historical photos are also used on the cards.

Just as with the banners and artifact exhibit in the War Memorial Veterans Building, this 2-player and solitaire card game required a team effort and months to develop. To limit the amount of rules, we created symbols (icons) and text for each card that explains how that card interacts with and against other cards. There are hundreds of possible permutations, but this system eliminated the need to write rules explaining every possibility; simply do what it says on the card. 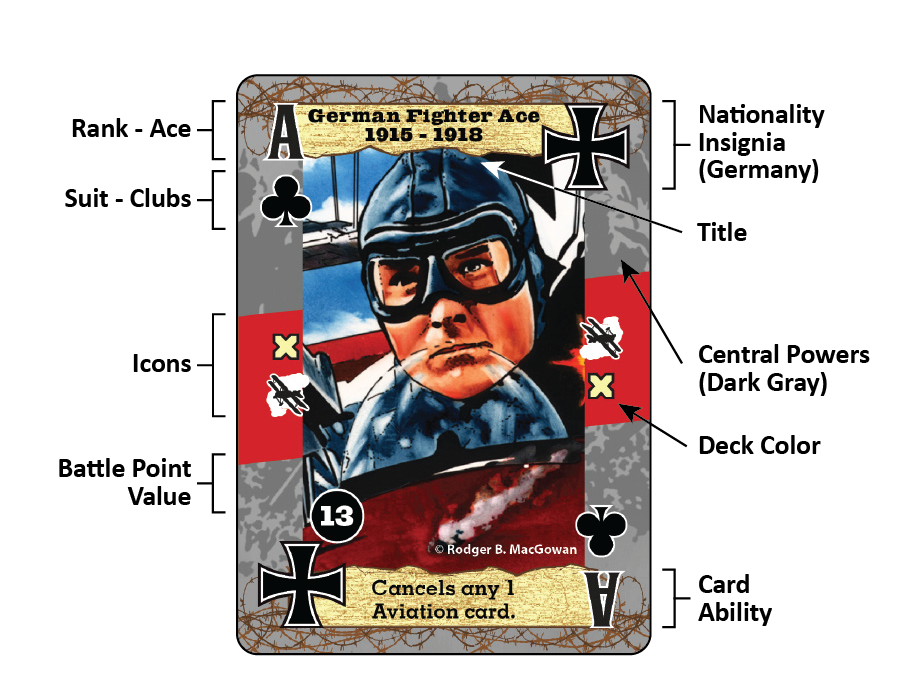 Symbols (icons) and text for each card explain how each card interacts with and against other cards.

The cards act together as military forces actually did on the battlefield. For example, an aerial reconnaissance card can “spot for” (be played with) an artillery card to create what today’s military calls a force multiplier.

Card interactions with and against other cards can have force multiplier effects.

Some cards cancel enemy cards, while others represent improvements in weapons, tactics, and doctrine for the player’s own side. But very few cards representing trenches were needed.

Where are the trenches?

How can we have a game about World War One without trenches? By September 1914, the month after the war began, trenches would appear on the Western Front, spread to nearly every battlefield, and become more intricate and more fortified.

Because trenches ended up everywhere, we didn’t need dozens of cards to represent them. Trenches are shown on the turn indicator card and on the turn-track mat (see images). In other words, the trenches are always there.

Trenches are found throughout the game cards and on the play mat.

The more important factors were:

These are the key elements that determined battlefield success or failure, and the cards each player draws in the game can help or restrict their options. In its most basic form, the game involves trick-taking – a simple card play technique – but with a lot of historical nuances.

Twenty-two months of playtesting proved MacGowan and Lombardy’s The Great War™ is easy to learn and fun to play but still educational. 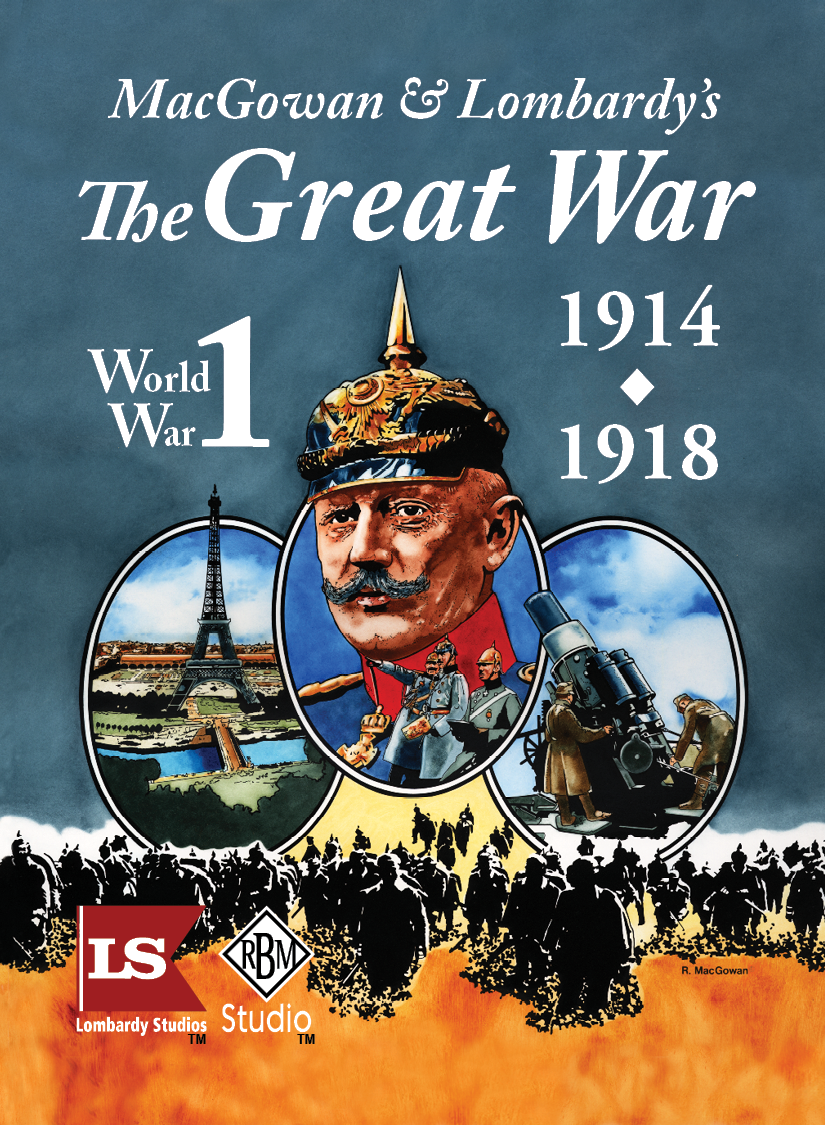 Rodger and I are now raising the money needed to publish the game, along with a teacher’s guide, on the crowdfunding website Kickstarter. We are nearly to our goal and expect to publish the game in the spring of 2021. For more information about the game, the cards, and the teacher’s guide visit https://www.kickstarter.com/projects/680099836/macgowan-and-lombardys-the-great-war-fast-playing-card-game?ref=11vkvc. 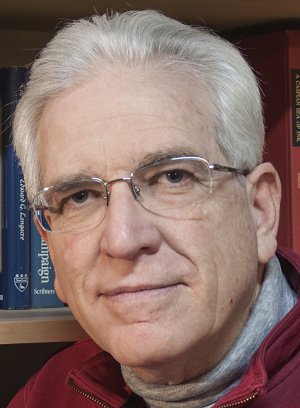 Dana Lombardy has been designing and publishing games since 1972. In 2019 he won a Serious Play bronze level award in the Education Board Game category for his Russia’s Great War: 1914 mini game with tutorial.