By Jeffrey B. Miller
Special to the United States World War One Centennial Commission website

I think of history in fluid terms. To me, capturing one moment in time is like capturing one moment in the bend of a river. What does the bend really look like? It all depends on your perspective. The pebble on the submerged riverbed sees it differently than the reeds on the right bank, the trees on the left, the bird gliding overhead, the fish battling upstream, or the bit of driftwood floating by. 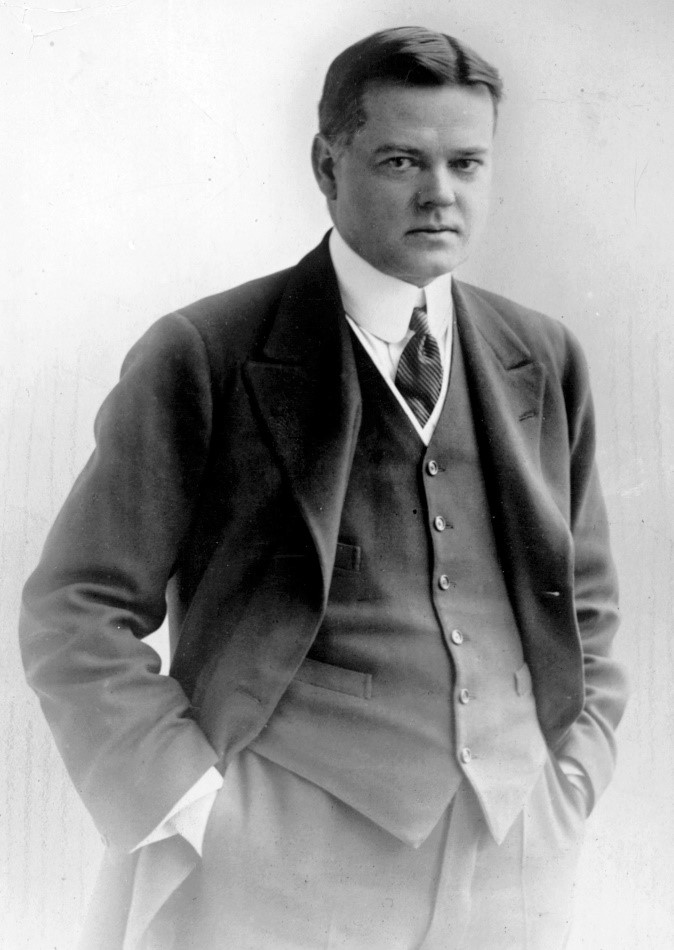 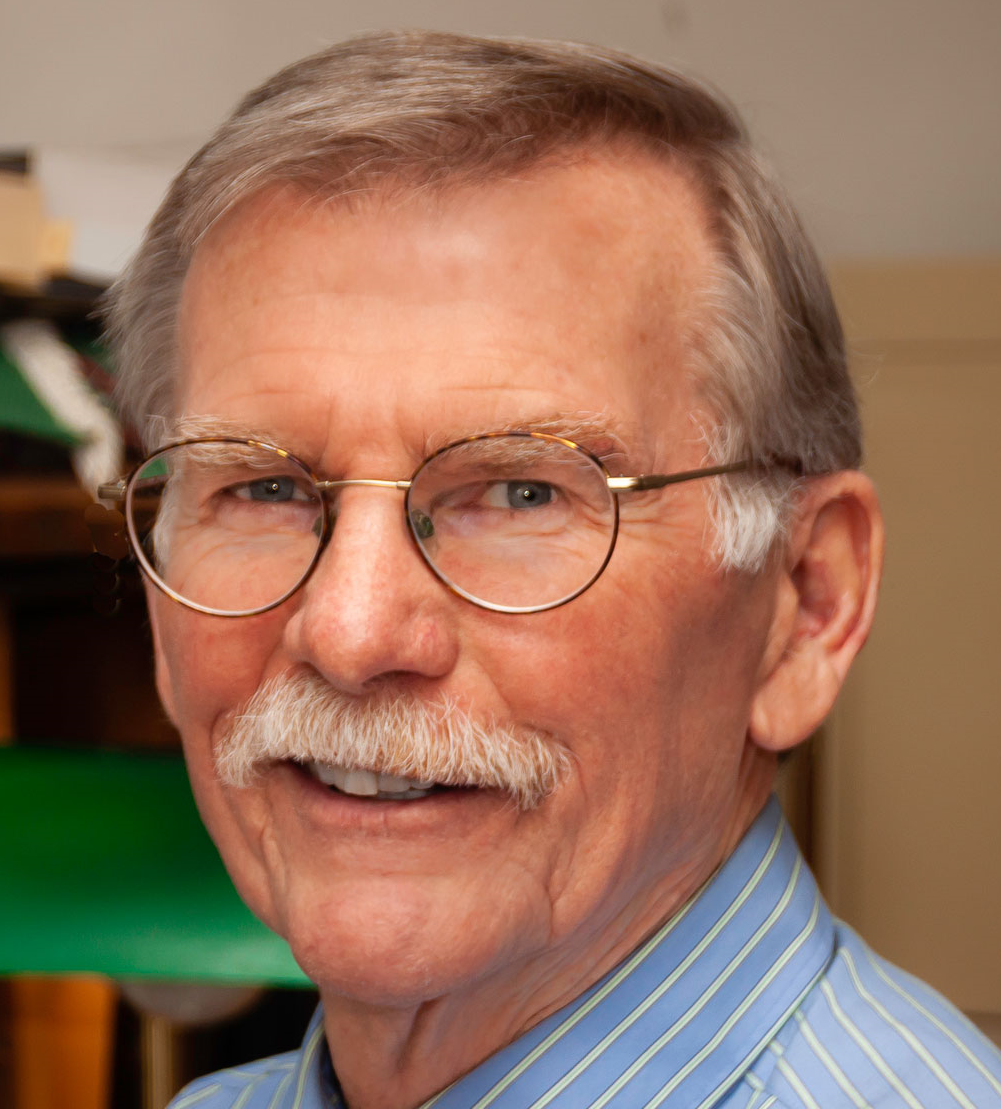 Jeffrey B. MillerWhen I was a teenager, I first heard the story of the Commission for Relief in Belgium (CRB) during World War I in tantalizing bits and pieces from my maternal grandparents, CRB “delegate” Milton M. Brown and Belgian dairy owner Erica Bunge. The interest that they inspired in me led to sporadic research and a long-winded, unpublished novel, Honor Bound. After turning to a journalism career that’s spanned forty years, I’ve spent the past ten years focusing full-time on collecting, cataloging, reading, and assimilating the documents, letters, journals, and photos of close to fifty CRB-related people, including Herbert Hoover, a then successful mining engineer who founded and ran the CRB.

From my work, I’ve written three nonfiction books for general readers that are the first books to focus on the CRB in Belgium in more than 30 years (the last one was George Nash’s excellent book, The Life of Herbert Hoover, The Humanitarian, 1914-1917; Norton, 1988). The topic deserves more coverage and I’m happy to report that I know of four academic historians who are working individually on CRB-related books that should be published in the next few years.

As for the CRB, it is a story that started more than 100 years ago but still reverberates through our twenty-first-century world.

Today, whenever there are civilians anywhere in the world in harm’s way—from a natural disaster to an armed conflict—the nearly universal response has been: “America will help.” That was not the case before World War I (1914–1918). Prior to that horrific conflict—and long before US aid programs such as the Marshall Plan, the Berlin Airlift, and the Food for Peace program—America was better known as a nation of shopkeepers more interested in the bottom line than in saving strangers in need.

What helped alter that view was the American-led, nongovernmental CRB. Working with its Belgian counterpart, the Comité National de Secours et d’Alimentation (commonly known as the Comité National, or CN), the CRB helped save from starvation nearly ten million Belgian and northern French civilians trapped behind German lines during the four years of World War I, making it the largest food relief program the world had ever seen. By its selfless efforts, the CRB began the redefinition of how the world saw America, how America perceived its role in the world, and how worldwide humanitarian aid would be administrated in the future.

The statistics are still staggering, especially given that the CRB operated during a pre-computer age devoid of technological advances such as commercial aviation, radio, or TV. More than 2,300 ship cargoes and thousands of canal barges carried more than five million metric tons of food and clothes into German-occupied territory, where 55,000 Belgians and northern French distributed it to millions of civilians every day. The operation spent nearly $1 billion in 1914 dollars (approximately $25 billion in 2020 dollars) but boasted an overhead of less than one half of 1 percent (less than fifty cents out of every $100). And the nearly ten million civilian lives saved are a sad but eloquent counterpoint to the more than nine million soldiers killed in the Great War. 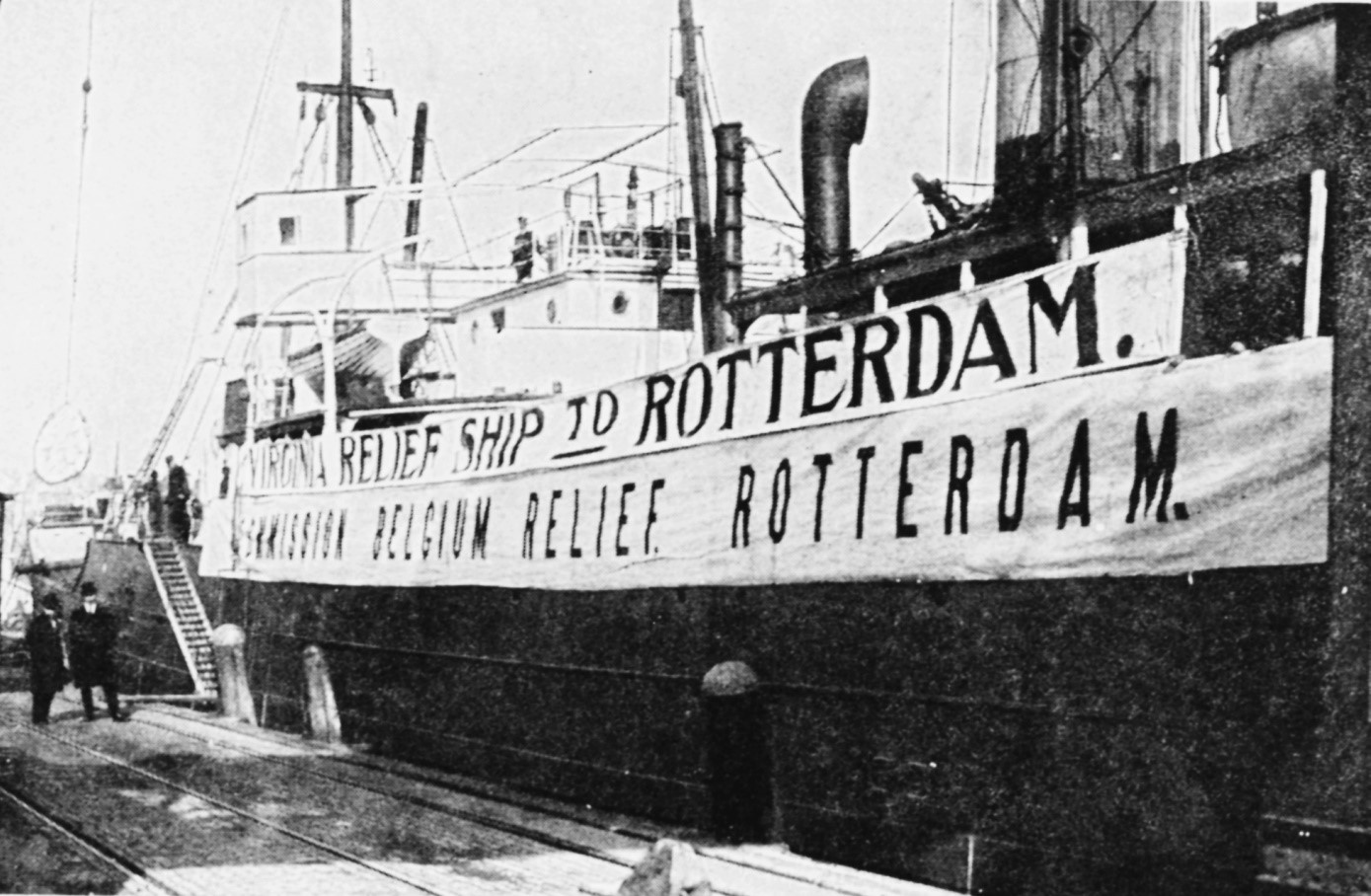 Each CRB ship was outfitted with large signs to alert German U-boats that they were neutral vessels participating in humanitarian relief. Public Domain; Hugh Gibson, A Journal from Our Legation in Belgium (New York: Doubleday, Page & Co., 1917).

It was an unparalleled feat that had never been attempted and was thought to be impossible—private citizens of a neutral country feeding an entire nation caught in the middle of a world war. The challenges were immense, from logistical obstacles and international intrigues to internal conflicts between the CRB and CN.

The humanitarian aid was necessary because after Germany’s August 4, 1914, invasion of Belgium to get to its real goal, France, the Germans refused to feed civilians within Belgium and a thin strip of northern France that they occupied. Belgium had been the most industrialized country in Europe and had imported more than 75 percent of its daily food. Mass starvation would begin by winter if nothing was done. 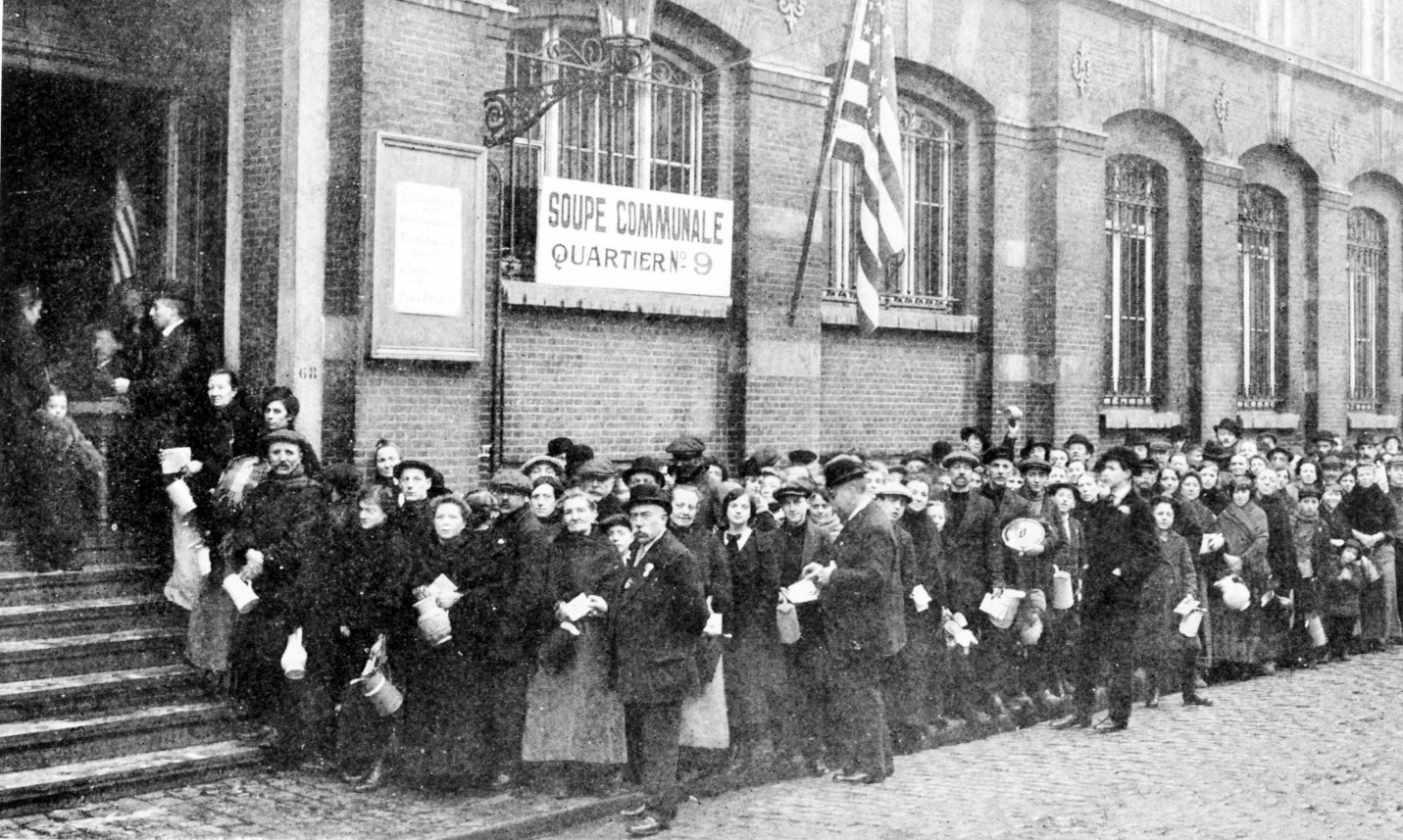 News of the impending catastrophe reached London just as Hoover was wrapping up months of volunteer leadership of a group he had founded to assist more than 100,000 American tourists stranded in Europe by the war. He had turned 40 on August 10 and was contemplating what to do next in his life. An orphan at an early age, he had been raised a Quaker and was instilled with a “Quaker conscience” that led to a strong desire to serve humanity.

By late September 1914, Hoover was approached to help the Belgians. With little thought for his mining operations, he agreed to tackle the impossible task of feeding an entire nation. On October 22, 1914, he and a small group of Americans formed the CRB.

Hoover’s role in the CRB and later as America’s “food czar” and head of the governmental American Relief Administration (ARA) were, in large part, why he was later propelled into the White House as the country’s thirty-first president.

Back in 1914, one of Hoover’s first challenges was the British refusal to allow food through its blockade unless neutral American supervisors, or CRB “delegates,” were inside Belgium to guarantee the food went only to civilians. Hoover needed US volunteers immediately but knew it would take weeks, if not months, to get them from America. Where could he find them in Britain?

He found some of the first CRB delegates at Oxford University. The school term was ending, and numerous American students (most of them Rhodes Scholars) were about to start six weeks of winter break. On Friday, December 4, 1914, the first ten Oxford students reported to the CRB office in London. They would leave the next day for neutral Rotterdam and then cross the border into war-ravaged Belgium. 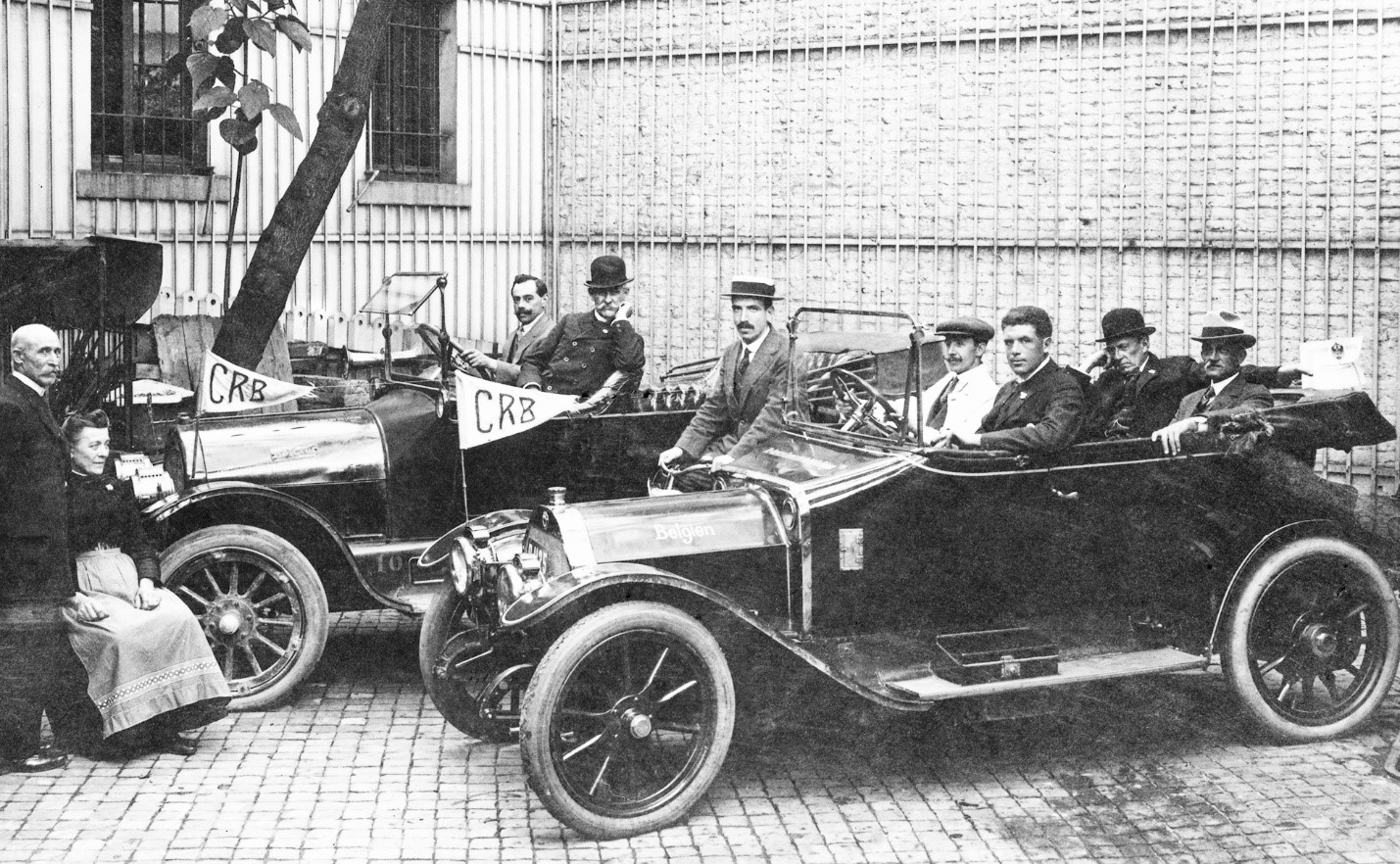 The CRB delegates and their Belgian drivers were some of the only civilians allowed to use motorcars in Belgium. Public domain; Herbert Hoover Presidential Library Archives, West Brand, Iowa.

Hoover took a moment from his other CRB tasks—buying tons of food, finding ships to haul it, getting all international parties to agree on conditions, securing financing for the millions he was spending every month—to speak with the young Americans.

“When this war is over,” he told them solemnly, “the thing that will stand out will not be the number of dead and wounded, but the record of those efforts which went to save life.”

In total, approximately 185 men and one woman (Charlotte Kellogg, wife of CRB director Vernon Kellogg) officially served as delegates in Belgium or northern France from October 1914 until May 1917, when the last Americans had to leave German-occupied territories because of America’s April entry into the war.

The majority of those delegates were idealistic university students in their twenties who embodied a spirit of giving and self-sacrifice. They dropped everything in their own lives to travel thousands of miles, enter the prison that was German-occupied Belgium, tackle a job that had never been done before, and rein in their personal feelings regarding the German occupation—all to help total strangers.

Many of them did so unreservedly, with no expectation of anything in return. They did what they did simply because it was the right thing, the moral thing, to do. And in the end, the result of their labors—and the work of thousands of Belgians and northern French—was the world’s largest food relief program that would set the gold standard for future humanitarian efforts.

As a result of this massive aid program, Hoover was loved worldwide and became known to many as the Great Humanitarian. And the tremendous impact the CRB had on the world would help begin the metamorphosis of the United States from a nation of self-serving shopkeepers to a world leader in humanitarian aid.

Today, Hoover’s presidential fall from grace has been well-documented, while his initial rise to glory during the most horrific war the world had ever witnessed has been all but forgotten. Also neglected have been the individual stories of the young CRB delegates, who did so much to serve humanity while asking nothing in return. Their stories deserve to be told and remembered. 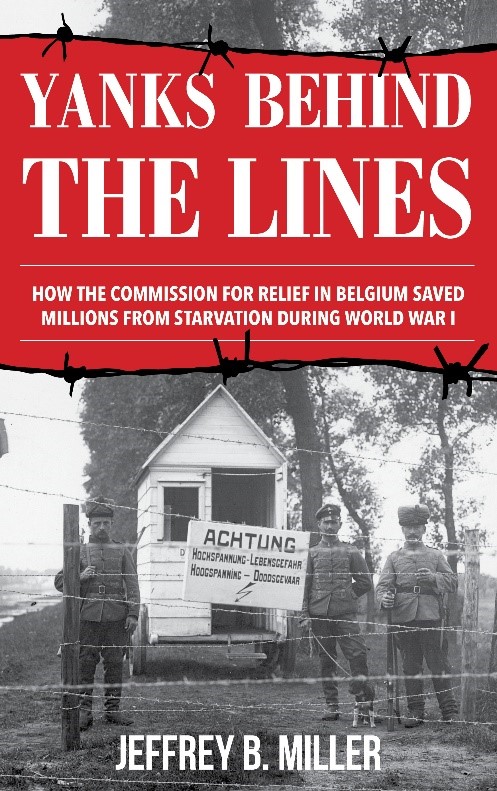 That has been the driving force behind my ten years of research and writing—to tell the stories of those in the CRB who worked within German-occupied Belgium.

My most recent book was released on October 22, 2020 to honor the 106th anniversary of the founding of the CRB. Yanks Behind the Lines has been called by Kirkus Reviews: “A powerful work of history, as informative as it is dramatically gripping. An impressive blend of painstaking historical scholarship and riveting storytelling.” The book is the culmination and the distillation of all my work into one concise history for readers interested in learning more about one of America’s finest hours in humanitarian aid.The focus is on the CRB and its Belgian counterpart, the Comité National (CN), within the context of German-occupied Belgium. I have touched only lightly on events outside the occupation because I did not want to soften my focus and I knew that numerous great books have already covered those subjects better than I could.

It is also important to note that the CRB and the CN were products of their time—women were never considered for executive positions within either organization, and only one woman, Charlotte Kellogg, was officially recognized as a CRB delegate. The early 1900s was a tumultuous period of seismic upheavals in social, political, generational, ethnic, and gender norms. Even a woman’s basic right to vote had not yet been secured, with success years away.

The story of the CRB, CN, and German-occupied Belgium—as told by much of the historical record of letters, journals, documents, reports, and books—reflects that time and the supposedly secondary role women played in food relief. Yanks Behind the Lines cannot do full justice to the tremendous contributions of women on both sides of the Atlantic, although it does attempt to show numerous tips of the huge icebergs that lay below.

All three of my books strive to cast light on those who have been in the dark too long. Returning to my thinking of history in fluid terms, these books contain my vision of who those people were and what they did. It is my vision. It is my perspective of the bend in the river.