A Plainfield, NJ World War I Story Reaches Across the Pond

By Nancy Piwowar
via the TAPintoPlainfield.net (NJ) web site

PLAINFIELD, NJ — In May 2020, in the midst of the COVID-19 pandemic, TAPinto Plainfield published an article announcing the Drake House Museum's online exhibit entitled “Plainfield During WWI and the Influenza Pandemic.” That article, it turned out, would connect the past to the present.

Leanne Manna, a Trustee at the Drake House, curated the exhibit and posted it online. Rutgers University Intern Stephanie Quartsin and I helped to research and document the veterans. Manna also designed the original exhibit panels that were funded by the Gannett Foundation. 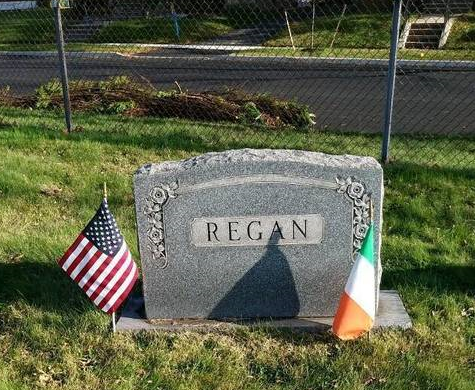 Martin Kane was buried in a Regan family plot in Plainfield, NJ.The exhibit was dedicated to the memory of the 45 soldiers and their Gold Star Families from Plainfield and the surrounding area who made the ultimate sacrifice for their country during World War I. Twenty-three of the soldiers succumbed to the ravages of the 1918 Influenza Pandemic. May they all rest in peace.

The article included the name of one casualty, Martin J. Kane, and a relative of his, who lives Ireland, found the article about the online exhibit.

Kane’s family had heard stories about their uncle who was a WWI casualty, but the details were sketchy and incomplete. One Irish niece (now in her 80s), who was born after his death, felt bad that no one in the family had ever visited his grave in New Jersey. She recently lost her husband, and has been homebound in Ireland due to the current pandemic, so it couldn't be her.

Her son and daughter-in-law from the Philadelphia area thought, as a way to lift her spirits from afar, they would embark on the journey of locating Kane’s burial site, and keep her updated on the progress. Information was exchanged across the “Pond” (Atlantic) by the family members.

The family’s inquiry was answered, and the pieces of a puzzle over 100 years in the making were fitted together.  The Historical Society made calls to St. Mary’s Church, and both its Pastor, Reverend Manoel Oliveira, and church staff were very helpful.  A tour of the cemetery was taken with Antonio, the caretaker, and the burial site was located, but there is no grave marker for Martin J. Kane, U.S. Coast Guard, WWI Veteran.

Kane’s story is one of an Irish immigrant’s.  He was born in Kilkelly, Ireland, in 1895, and his mother died when he was ten years old.  Later in life, he decided to immigrate to America, and he arrived at Ellis Island on the St. Louis passenger ship in 1915.  His last name was changed from Keane to Kane when he arrived in the U.S., a common occurrence for immigrants.

Kane settled in this area because he had an uncle, Martin Regan, who lived on Spooner Avenue, and he was employed by the Spicer Manufacturing Company in South Plainfield.  Three years after his arrival, at the age of 23, he was among the men drafted for WWI.  He entered the U.S. Coast Guard in May 1918, and served in Company D, Fifteenth Battalion.

Read the entire article on the TAPintoPlainfield web site.