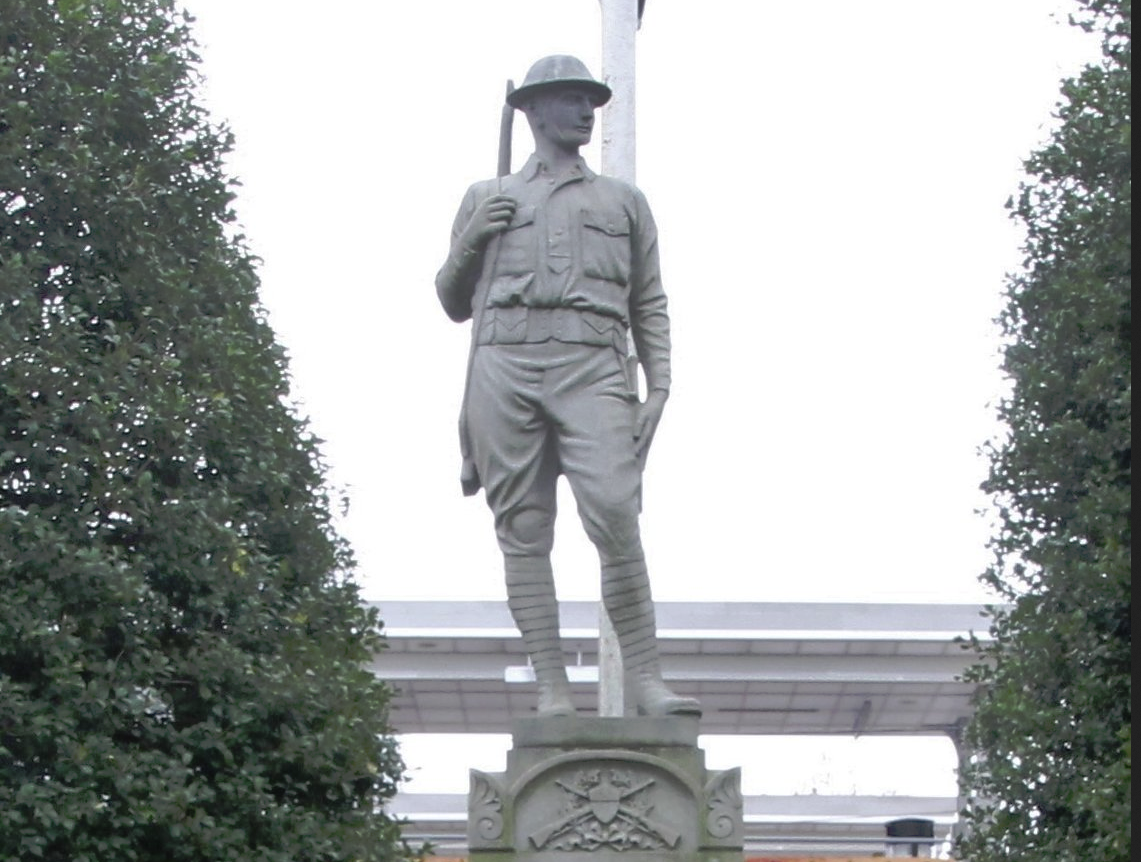 The Doughboy Monument in Lynbrook, which turned 100 in October, has had a storied history filled with controversy.

The following information came from the archives of Lynbrook American Legion Post 335, and old newspaper clippings, including the Nassau Daily Review and Nassau Daily Star newspapers. The period of the newspaper articles is from 1931 to 1936.

In this day and age when some want to take down statues from past generations and wars, Lynbrook has its own statue that has stood for 100 years. as of this past October. However, the statue did cause some controversy in the 1930s, with one newspaper saying it caused a “village civil war.”

That statue is the veteran’s Doughboy Monument (also called the Soldiers and Sailors monument in the 1920s), a statue of a World War I soldier which stands on a small plot of an island in Saperstein Plaza behind Lynbrook’s Long Island Rail Road station. It is the centerpiece of the village’s war monuments. On the four-sided pedestal below the statue are the names of 15 local soldiers killed in action in World War I.

The inscription on the back of the statue reads, “Erected by the citizens of Lynbrook and vicinity, dedicated on 12th day of October A.D. 1920.”

The Doughboy did not always stand in Saperstein Plaza, and one of its past locations caused the controversy that pitted Lynbrook’s American Legion members against village fathers, and especially against the Lynbrook Library board of trustees.

Back in the mid-1930s, Lynbrook’s American Legion Post 335 numbered 270 members, with championship county and state baseball teams, a boy’s club, and even a 30-piece band. It also sponsored an annual week-long village carnival at Sunrise Highway and Atlantic Avenue and highlighted an annual contest “to decide the most popular policemen, fireman, letter carrier, boy and girl in Lynbrook.” The post also hosted musical plays, and its former building on Union Avenue was a center of community activities, including parties, meetings, and other village events.

The Doughboy statue, which reportedly cost $5,000, was commissioned by Lynbrook’s Militia Unit, Company B, 23rd Regiment of the New York National Guard. Philip Stauderman, former Lynbrook village president, and a captain in the Regiment, told the Nassau Daily Star in 1936 that the statue was built through public subscription and “turned over to the Village of Lynbrook after its dedication by Gen. John F. O’Brien, on Presidents Day.”

The inscription on the bottom of the Doughboy said the that the general’s last name is O’Ryan.

The statue with its pedestal of names of those killed in action was originally placed on the corner of Merrick Road and Blake Avenue where an Esso gas station stood and where a village fountain now stands.

Read the entire article on the liherald.com web site here: