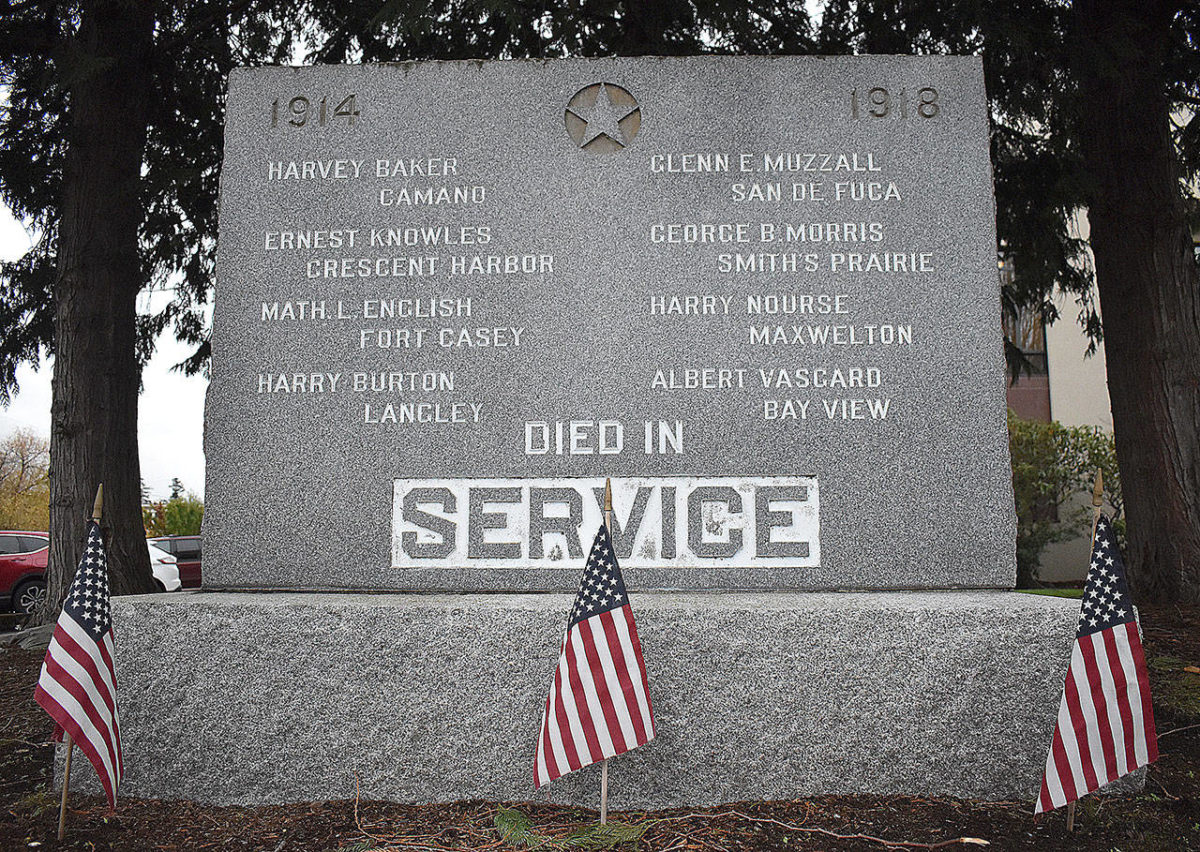 A World War I memorial stands in front of the Island County Courthouse with the names of eight men who died in military service during the war. Candace Nourse-Hatch went digging to find out their stories. Photo by Emily Gilbert/Whidbey News-Times

Although she had walked by the World War I memorial numerous times when she still lived on Whidbey Island, Candace Nourse-Hatch didn’t know who put it there or the stories of the men on the stone monument.

Nourse-Hatch’s great-uncle, Harry Nourse from the Maxwelton area on South Whidbey, is one of the eight men from Island County who died during their military service in World War I. They are memorialized on a stone monument in front of the Island County courthouse, right across the street from Coupeville Town Hall.

Nourse-Hatch collected biographical and military service information about each of the men over the course of a year from government archives, local newspapers, obituaries and a book written about one of them.

She found that none of the men were born on Whidbey Island, but each somehow made their way to Island County.

Nourse-Hatch’s great-uncle lived with his wife and his siblings on a farm in Maxwelton just after the turn of the century. The Nourse siblings emigrated to Whidbey Island from Australia.

“They’d never even heard of Whidbey,” Nourse-Hatch said, adding that the group had been looking to settle in Canada at first and wasn’t sure how they came to the island. The farm became their family home.

When her great uncle was 37 years old, Nourse-Hatch said, he joined the Canadian Army because the United States was not yet involved in World War I.

“For some reason he decided that he had to go fight,” she said.

He said goodbye to his wife and siblings (he had no children of his own) and went to British Columbia where he enlisted in Canadian Army, British Columbia Regiment, 7th Battalion on Oct. 18, 1917.

He died about a year later on Sept. 2, 1918, after being hit by shrapnel from an enemy shell, according to Nourse-Hatch’s research. He is buried in Vimy Memorial Cemetery, Pas De Calais France.

“Uncle Harry’s loss was a very tragic event for the family because he and his wife lived right there,” with the extended family, she said. “We knew all about him. He was a real hero in the family.”

Read the entire article on the Whidbey News-Times web site.