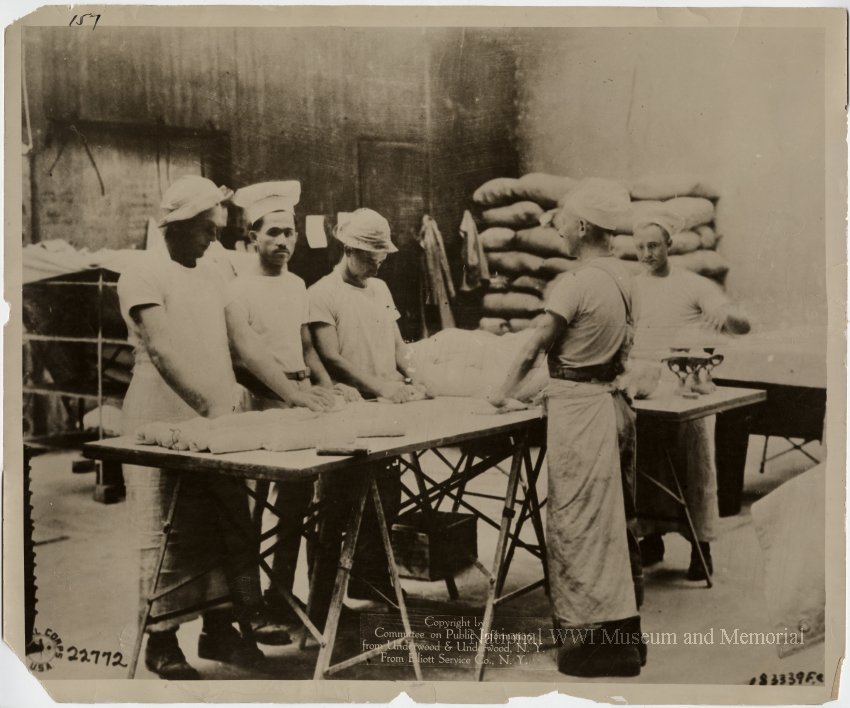 The molding table of detachment of Bakery Company No. 341 in Paris, France 1918. Fourteen thousand pounds of bread per day was baked there, sufficient to supply all troops in the Paris District. (U.S. Army Signal Corps photo.)

Baking During a Time of Crisis

via the National WWI Museum and Memorial web site

“The American Baking Industry found itself during the war,” declared the Ward Baking Company in their 1920 publication, Bread Facts. Proclaimed before the “sliced-bread” era (the technology was created in 1917, but found its audience the 1920s), it may feel like an overstretched statement. The national food effort, and reorganization of the supply chain, served an Allied victory and inarguably changed how Americans ate, prepared and thought about food. During this current era of uncertainty, a multitude of parallels, including the unifying role of baking, arise with a time 100 years ago, when the nation grappled with the world’s first truly global war.

In World War I, food scientists around the nation focused on bread making as essential to winning the war. Government commissions studied baking and milling to economize both the process and nutritional value, recognizing that wheat, having been essential in European food aid prior to U.S. entry into World War I in April 1917, was one of the major energy sources for Americans both “over there” and on the homefront. Feeding more than 4 million Americans serving in the U.S. Armed Forces, while continuing to supply agricultural provisions for allies, was a tactical feat that relied upon military precision and a broad base of support among the population.

In the early 20th century, Americans obtained nearly 30%of their calories from bread. To conserve the necessary wheat to ship overseas (As many Europeans had neither the facilities nor familiarity to efficiently process other grains such as corn at the time), Americans had to make individual choices for change every day. A major effort for patriotic wheat conservation, both local and federally funded, meant an emphasis on using alternative ingredients to wheat flour in homes and restaurants: buckwheat, rice, rye and graham flours, cornmeal, potatoes (sweet and white), among others – all items that may feel “modern” to the 21st century cook. The U.S. government declared if each member of an American family gave up a slice of bread a day, each household could share 91 loaves with those in need.

Read the entire article on the National WWI Museum and Memorial web site.