Against the backdrop of a recently restored World War I statue, local officials, military veterans, and spectators gathered in the heart of Fallsington to salute those who served their country, particularly those from the World War I era. 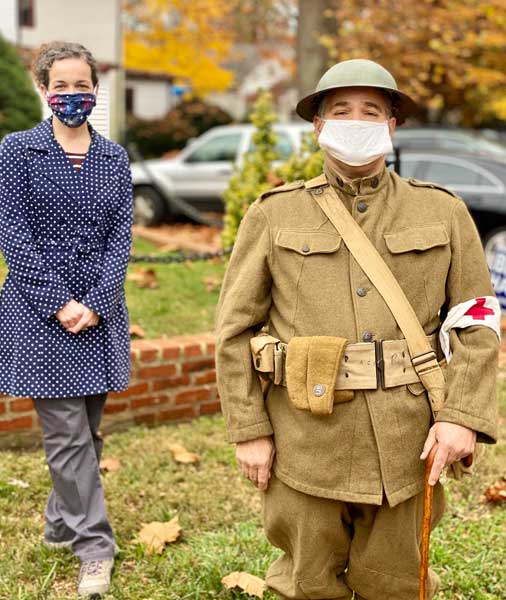 The Falls Township Board of Supervisors this year hired a conservation company to breathe new life into the limestone statue.

The company thoroughly cleaned the statue and pedestal, strengthened the stone, repaired a crack, and recreated a missing barrel on the rifle stock.

The brick walkway and low wall were also steam-cleaned to reduce soiling and biological growth.

Falls Supervisors Chairman Jeff Dence said the board is committed to its restoration efforts, noting that preservation is planned for the historic Three Arches home in 2021.

“We have a rich history in Falls Township,” Jeff said. “It’s our duty and obligation to preserve our history.”

Historic Fallsington Executive Director Kimberly Boice provided a Thank-a-Vet kit to those in attendance. She offered “sincere and heartfelt gratitude” for veterans’ service and noted that more than 4.7 million served in WWI.

“Some returned home,” Kimberly told the small crowd gathered at the statue. “Others did not. All bore the scars and marks of their service.”

Bucks County Commissioner Bob Harvie, who lives in Falls and previously served on the board of supervisors, noted that the statue has been situated in the center of Fallsington for almost 100 years.