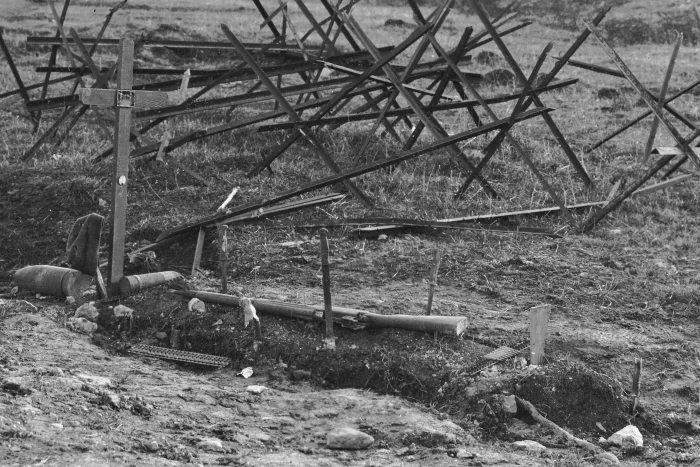 This ca. 1918 photo has failed to reveal the identify of the US soldier buried beneath the single grave marker for more than a century — that’s until two WWI researchers took on the challenge of discovering who was commemorated in the image.

By Charles G. Thomas and Austin Osman
via the Military Trader web site

A photographic image captured by Sgt. Owen G. Williams of the 3rd Photo Section, American Expeditionary Force (AEF) of a lone American grave north of Flirey, France, sparked the interest of the authors, both avid WWI researchers. Who was the soldier marked by the rudimentary cross? Despite excellent details the photo was able to reveal, the sparse caption on back (Flirey), and a diary entry left by Williams, the identity of the soldier has remained unknown for over a century.

The question was, could the Doughboy in the poorly marked grave finally be identified? We thought we could.

TAKE A CLOSER LOOK AT THIS PHOTO

As seen above, the grave is surrounded by cheval de frise barricades and the wreckage of war. The barricades would have been used to block the nearby road (seen in the background). Note the fired artillery shells, numerous Hotchkiss machine gun ammunition clips, and even US and German bayonets stuck into the ground marking the edge of the grave. A US Enfield rifle (with bolt removed) rests on top while a holed overseas cap is seen near the head of the grave.

What catches most eyes is the interesting name plate and identification disc (“dog tag”) nailed to the cross. A high-resolution scan revealed that there is a name scratched on to the plate: “Eugene something.” The Model 1917 dog tag, however, was unreadable.

BEGINNING TO PIECE THE PUZZLE TOGETHER

From here, we were able to piece together some clues:

*The location written on the reverse is Flirey. This lies between St. Mihiel and Point Au-Mousson.

*From that, we could surmise the subject was most likely killed during the St Mihiel Offensive, when the US presence there was greatest.

*Per the the AEF’s order of battle, Flirey was in the IV Corp’s zone for the offensive. IV Corp consisted of the 1st, 2nd, 42nd, and 89th Divisions. Of those Divisions, the 1st, 2nd, and 42nd were all equipped with M1903 Springfield rifles. Remember, there was an Enfield rifle shown with the grave.

*The 89th Division, however, were equipped with M1917 Enfield rifles. In checking the Corps combat map for the battle, we see that the 89th (carrying Enfield’s) started out of Flirey.

Read the entire article on the Military Trader web site.