By Michael T. Naya, Jr.
via the tapinto.net web site

KENILWORTH, NJ – Many of you reading are now witnessing a major moment in our nation's history. We are witnessing the impact of the coronavirus pandemic, our nation may be preparing to lockdown once again, and ultimately may come to a halt once more. It was during the coronavirus pandemic that I discovered two veterans of two different wars that were lost to time. I had discovered Horseshoer Thomas W. Regan who perished on November 3, 1918 and Second Lieutenant Roger D. Allcroft who was killed in action on June 22, 1945. Since discovering Roger he has had a street sign dedicated to him and his name is being planned to be added to Kenilworth’s war memorial outside VFW Post 2230. 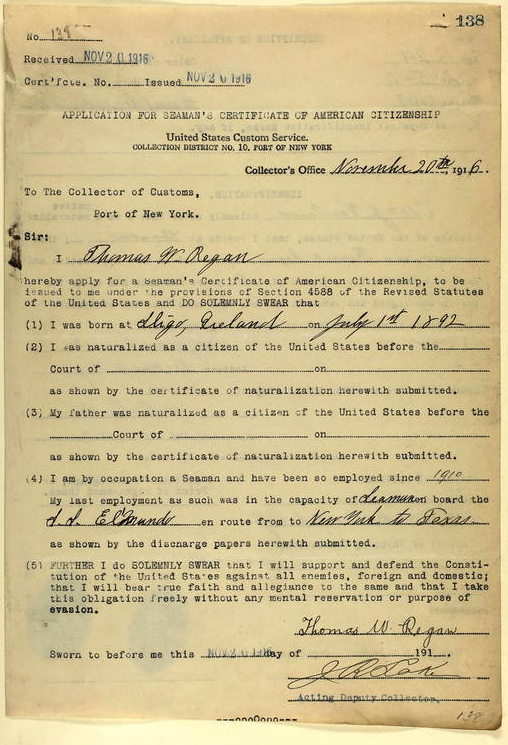 Thomas was born in Sligo County, Ireland on July 1, 1892. He immigrated to the United States at some point prior to 1910. From 1910 to 1916 he had been employed as a Seaman and his last assignment in 1916 was aboard the S.S. Edmund on a trip from New York to Texas. Through his employment, he was able to apply for a Seaman’s Certificate of American Citizenship which allowed him to work and live in the U.S. legally.

Thomas, like so many other Doughboys did not die from an artillery shell, a bullet wound, or war related injuries. Thomas was killed by an invisible plague known as pneumonia. I speculate that Thomas may not have died of pneumonia but rather the Spanish Influenza which had not been widely studied at the time. Much like pneumonia and the present day Coronavirus, Spanish Influenza was a respiratory illness. The Spanish Flu had targeted young, healthy adults in the prime of their lives separating it from other known viruses throughout the years. This is why I believe that Thomas may have been among Kenilworth’s casualties due to the deadly virus.

Thomas’s story deserves to be remembered especially today. An immigrant who felt the need to serve his country so he answered the call to duty. Although he may not have died in combat he gave his life serving his country in uniform and that is what makes him a hero. November 3, 2020 is the one-hundred and second anniversary of his death and I hope that you will remember him.

Read the entire article on the tapinto.net web site.