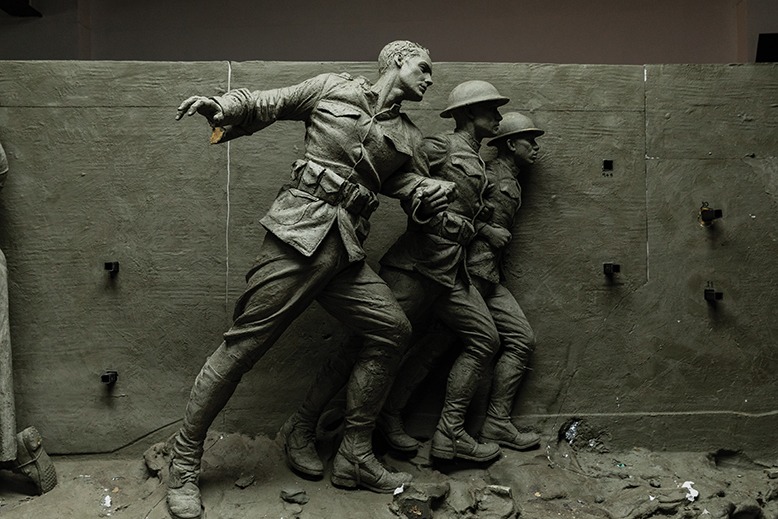 In the completed section of A Soldier’s Journey, the soldier heads into battle with two comrades. Courtesy of Sabin Howard

Behind the Epic WWI Memorial Being Sculpted in an Englewood Warehouse

By Leslie Garisto Pfaff
via the njmonthly.com web site

Behind the soaped window of a former warehouse in downtown Englewood, an epic journey is taking shape. Under a skylight that catches the day’s waning glow, Sabin Howard is carefully applying small swipes of clay to the figure of a soldier in a World War I doughboy’s uniform. Howard’s gaze moves from the sculpture to actor Mark Puchinsky, a live model who looks every inch the young warrior, down to the authentic olive drabs that Howard purchased from World War I reenactors.

The figure, about 10 percent larger than life, is one of 38 that will eventually comprise an intricate, 60-foot-long bronze relief titled A Soldier’s Journey. It will form the centerpiece of the country’s first national World War I memorial, commemorating the 4 million Americans who served in what was once known as the Great War. Chosen out of a field of 360 entries in an international competition, Howard’s piece will be installed in Pershing Park, just steps from the White House, in the fall of 2023 or the following spring.

A scale model hints at the scope of Howard’s epic work. To date, he has completed 10 of the planned 38 figures. Courtesy of Sabin Howard

The uncertain timing reflects the arduousness of Howard’s process. Each figure requires some 600 hours of work, meaning Howard can complete only nine or 10 figures in a year, even with two assistant sculptors and a team of models. Considered a master of modern classicism, Howard, 57, creates sculpture that is startlingly realistic. He is, says project manager Traci Stratton—the novelist/documentarian who is also Howard’s wife—a perfectionist: “If he had 800 hours to complete a work, he’d want 1,600,” she says. “If he had 1,000, he’d want 2,000.”

In fact, the project would literally have taken a lifetime to complete if Howard had followed his traditional routine: creating a drawing of the proposed sculpture, producing a small-scale 3-D maquette (or preliminary model), building foam-covered steel armatures (or frameworks) of each figure, applying clay to the armatures, and then casting the work in bronze. He was able to skip the labor-intensive third step in favor of a digital process in which the armatures are 3-D printed.