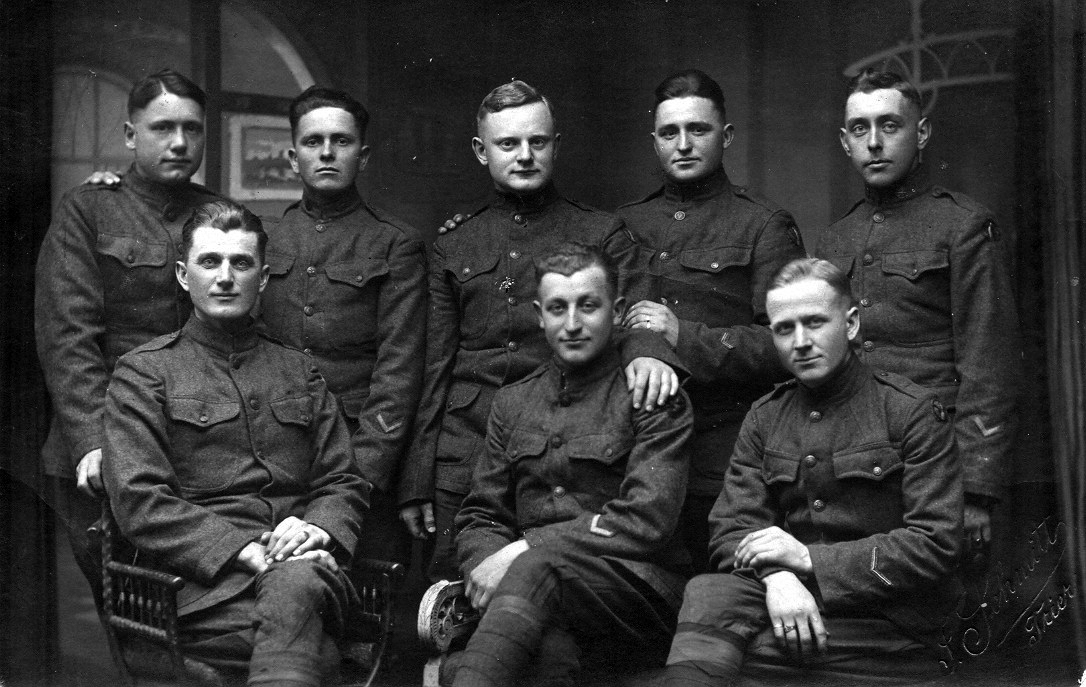 Charlie Bauer is seated in the center of the front row of this group of U.S. soldiers who served in World War I. Charlie was the son of Heinrich and Katherine Bauer from Norka and was born in Oregon in 1894. This photograph was taken in Trier, Germany in 1917 and was provided courtesy of Kris Dillman.

The Volga Germans in Portland, Oregon during World War I

By Steven H. Schreiber
via the volgagermansportland.info web site

The outbreak of World War I on July 28, 1914 was met with anxiety and fear by both the Volga German colonists living in Russia and their family and friends who had immigrated to the United States.

​The war exacerbated Russia’s Germanophobia and Slavophile tendencies. Despite the fact that the Volga Germans had lived peacefully in Russia for 150 years, Russian Foreign Minister Zazonov called for a “final solution” to the ethnic German problem in Russia, noting that the time had come "...to deal with this long over-due problem, for the current war has created the conditions to make it possible to solve this problem once and for all.” Russian General Polivanov wrote in a pamphlet that was distributed among Russian soldiers on order of Grand Duke Nicholas, the Tsar's uncle:

"Russia's Germans must all be driven out, without respect of age, sex, any supposed usefulness, or their many years of residence in the empire."

Despite their loyalty to Russia, the following insult was not uncommon:

"You are Germans--Nemski," they were charged. We are going to fight the barbarians, your brothers. Woe to you, you scoundrels, if you make any effort to help your Kaiser Wilhelm."

Despite all of the rhetoric, thousands of Volga German men were conscripted to serve in the Russian military. However, they were not allowed to speak German or sing German songs. They were watched closely as if they were the enemy. Their situation worsened in 1915 after a major defeat of the Russian army by the German forces. Without evidence, the ethnic Germans serving in the Russian army were conveniently blamed for the defeat.

War hysteria was spread by vilifying publications and wide-spread rumors. The millions of semi-literate and non-literate Russians had no way of ascertaining the facts and readily accepted the absurd propaganda. For example, it was claimed that a Volga German flour-mill magnate was shipping a weekly trainload of flour from Saratov to Riga for Kaiser Wilhelm's forces. No one asked, and it was never explained, how an entire trainload of flour could travel hundreds of miles through Russia and across a war front manned by Russian troops on a weekly basis.

Despite the fact that there was no documented case of a German colonist having been charged with treason or sabotage, the anti-German campaign continued. ​Most German language newspapers were closed or suppressed. Approximately 190,000 to 200,000 ethnic Germans living in Russia were deported to Siberia from 1915 to 1916, including several pastors. The number of losses is unknown, but a mortality rate of one-third to one-half (63,000-100,000) is estimated.

In 1916, an order was issued to deport the entire Volga German population (around 650,000 at the time) to the Siberia. The 1917 Socialist Revolution prevented that wholesale deportation from being carried out. About this turn of events, the author and poet Peter Sinner wrote:

When the storm had subsided, our German colonists saw themselves betrayed once more. The temporary government immediately halted the fierce expulsion law, but they did not rescind it. The general quartermaster of the temporary government renewed the prohibition of the German language. The war would be continued.

The situation was also growing dire for ethnic Germans living In the United States. Anti-German sentiment and propaganda reached extreme levels after America entered the war in April 1917. The German language was forbidden to be used in many places. German language newspapers were closed and several editors were sent to interment camps. Germans were tarred and feathered in 13 states, including Oregon. German books were banned in libraries and burned in public ceremonies.

Read the entire article on The Volga Germans in Portland web site here: