By Rebecca Miller
via the kanecountyconnects.com (IL) web site

Throughout our nation’s history, Black soldiers have served proudly in the U.S. armed forces.

Beginning with the Battle of Lexington and continuing to the present day, Black women and men have answered America’s call and served bravely. Their sacrifice often came at a time when the nation as a whole did not recognize the value of the Black community and offered only limited and segregated opportunities for military service.

Assigned to menial jobs and barred from advancement, Black soldiers were subjected to widespread racism while serving to protect American ideals that did not include them. 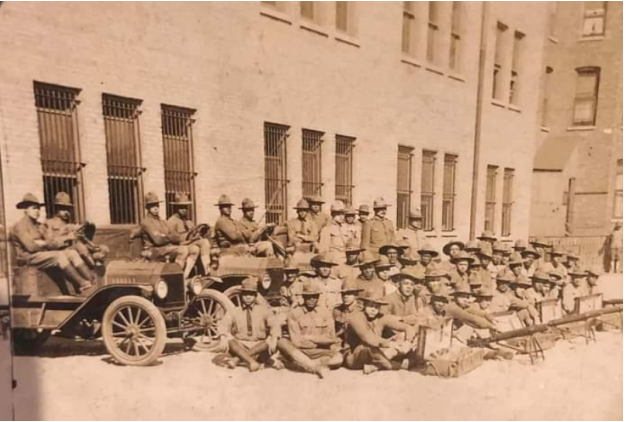 The 8th Illinois Regiment was originally formed in 1898 by Gov. John R. Tanner of Illinois. Tanner authorized the formation of a regiment of Black Soldiers recruited from communities in Chicago and Springfield. The regiment made history as it was the only unit to be led by Black officers to fight in the Spanish American War. Shown here in 1917, the regiment would become the 370th U.S. Infantry and go on to see action in France and Belgium. The 370th is one of few African-American regiments that served in combat in World War I and notably was the only regiment commanded entirely by Black officers. Photo provided by Jeff Williams, The Bearded Historian.

Black soldiers serving prior to 1948 were almost exclusively led by white commanders and lower ranking white officers. Black soldiers or all-Black units were reduced to support functions such as building roads or serving as cooks and porters.

Yet the bravery of these soldiers and the potential leadership among their ranks could not be ignored. In the period leading up to WWI, the 8th Regiment of the Illinois National Guard would make history. This unit would become known as the 370th U.S. Infantry and was made up entirely of Black soldiers, officers and commanders.

The 370th Infantry would see combat in France, becoming the first U.S. regiment in the French region of Alsace-Lorraine. Among its ranks was Elgin’s own Lewis P. Andrews.

Born in Elgin on Aug. 5, 1879, Lewis Percy Andrews was already a veteran of the Spanish American War (1898) and had been a well-known star on the Elgin High School football team, where he played left defensive end. He was the son of Samuel Newser Andrews, a Civil War veteran who had served in Company B, 42nd Regiment, U.S. Colored Infantry.

Lewis P. Andrews mustered into the 370th U.S. Infantry in 1917 as a supply sergeant assigned to the Quartermaster’s Corps. His incoming rank reflected his prior military service.

Read the entire article on the kanecountyconnects.com web site here: