A rifle and a shovel — As a wagoner in World War I, early Pablo Beach resident made his mark in history

By Johnny Woodhouse
via the Beaches Museum (FL) web site

The oldest headstone in Lee Kirkland Cemetery, the historic African-American graveyard in Jacksonville Beach, belongs to Jessie Butler, a native Floridian who performed back-breaking work in a seaside mining camp known as Mineral City before serving his country overseas in World War I. 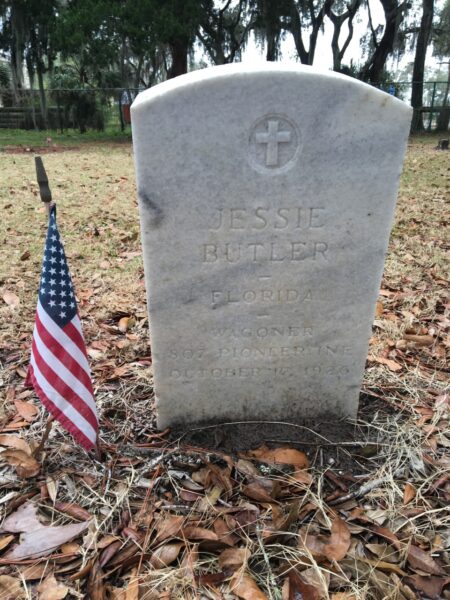 Wagoner Jessie Butler of Pablo Beach, FL, was one of more than 200,000 African Americans who served with the American Expeditionary Force on the Western Front during World War I.The upright marble headstone, issued by the U.S. Government, denotes the little-known unit he served in during the war, and, most importantly, his rank – that of wagoner.

According to census records, Butler worked two jobs in 1910, including as a carpenter for Jacksonville resident Pleasant Niblack. A skilled laborer for most of his short life, Butler listed his employer as Buckman and Pritchard, Inc. on his 1917 WWI draft registration card.

Henry Buckman and George Pritchard began mining the beach for rare minerals in 1916 after discovering a huge vein south of the St. Johns County line, according to “Turning sand into gold” by late historian Don Mabry. “World War I was raging in Europe and these elements were extremely valuable in weapons of war,” Mabry wrote. “Extracting it from the sand required machinery and men.”

According to a 1918 Duval County draft board record, Butler, then 25, listed his occupation as teamster. In those days, a teamster was not a truck driver but a driver of a team of animals.

Driving mule teams was a skill that was sought after by Army supply units during WWI.