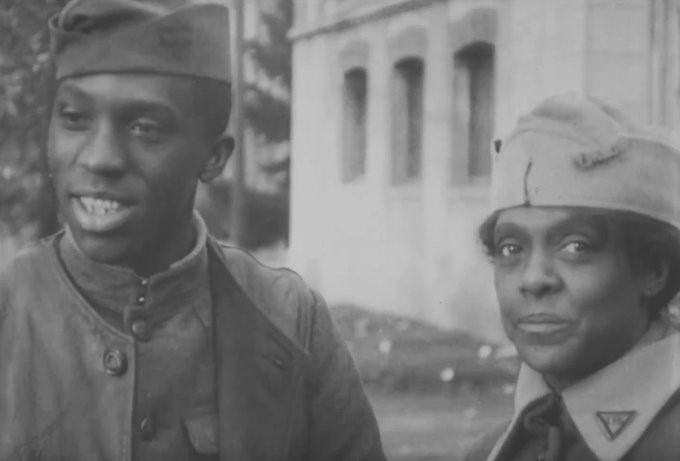 African American suffragist Addie Waites Hunton (right) pictured with an unidentified Black American Soldier in France during World War I. Hunton served with the YWCA in France during1918 and 1919 in a variety of roles supporting the segregated Black troops stationed there.

In preparation for Black History Month, I did a little research and uncovered some fascinating people like Addie Waites Hunton, an African American suffragist, activist, writer, political organizer, and educator.

Born in Norfolk on June 11, 1866, Addie D. Waites lost her mother as a child and then moved to Boston to be raised by a maternal aunt. She was the first black woman to graduate from Philadelphia’s Spencerian College of Commerce. Waites then moved to Normal, Alabama, where she taught at the State Normal and Agricultural College (now Alabama Agricultural and Mechanical University).

In July 1893, she married William Alphaeus Hunton, who had come to Norfolk in 1888 to found and become secretary of a Young Men’s Christian Association for Negro youth. During the first years of her marriage, Hunton worked full time and also was her husband’s secretary. She became a member of the National Association of Colored Women, attending the 1895 founding convention in Boston as a delegate from the Woman’s League of Richmond.

After living in Norfolk and Richmond, in 1899 the Huntons moved to Atlanta, Georgia. She had four children, but only two survived infancy. After the 1906 Atlanta race riot, the family moved to Brooklyn, New York, where the Huntons continued their activism. In 1907, the Young Women’s Christian Association (YWCA) appointed her secretary to work among black Americans. She toured the South and Midwest, attracting prominent black women to the YWCA.

Around August 1902, Hunton addressed The Negro People’s Christian and Educational Congress in Atlanta. Her talk was entitled “A Pure Motherhood: The Basis of Racial Integrity.” She began with:

"This great and unique Congress has rightly discerned the signs of the times inasmuch as it has given due recognition to the women of the race. For, in the discussion of these problems affecting the highest and purest development of our people, the relation of woman to that development cannot be ignored."

Hunton said women had shown their leadership in the church, in social and moral reforms, and in the business world. “To woman is given the sacred and divine trust of developing the germ of life….Upon the Negro woman rests a burden of responsibility peculiar in its demands.” Hunton called upon the “intelligent mothers of the race…to concentrate their efforts… [to] diminish the number of poorly born poorly bred and deformed children…out on the streets….”

From 1906 to 1910, she was a countrywide organizer for the National Association of Colored Women (NACW).